Our live coverage of Canadian Prime Minister Justin Trudeau's news conference has ended. Scroll through the posts to read more. 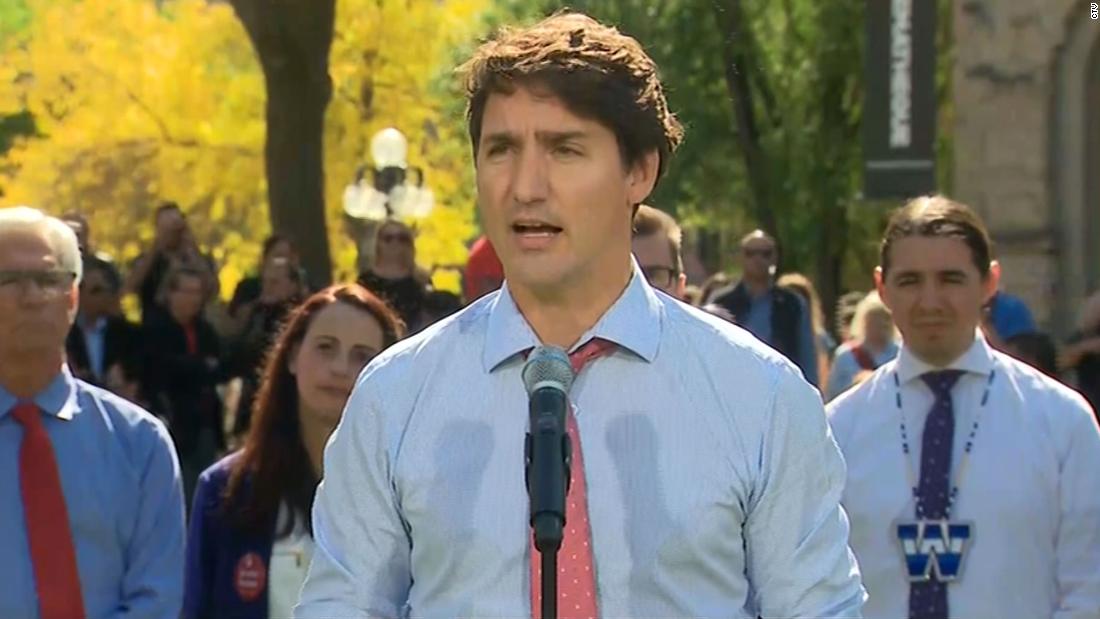 "What I did hurt them, hurt people who shouldn't have to face intolerance and discrimination because of their identity. This is something I deeply, deeply regret," he said.

Asked if he considered dropping out of his reelection bid, Canadian Prime Minister Justin Trudeau appeared to confirm that he plans to stay in the race.

Trudeau said after speaking to allies and community leaders, he will "continue to do the work that is necessary to keep us moving forward in the right way."

"Canadians have an important choice to make on Oct. 21 and I trust Canadians to make that right choice," he said.

Trudeau went on to say that he hopes Canadians will support him and his party. 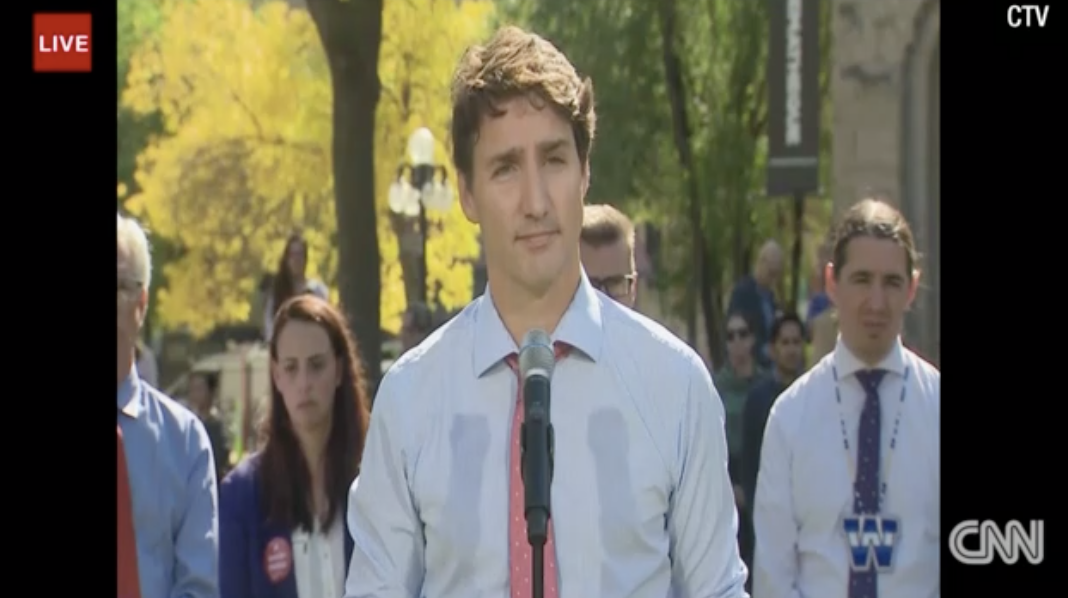 Canadian Prime Minister Justin Trudeau said he told his staff when he found out that Time was looking for a photo of him in racist makeup.

On Wednesday, Time, a CNN affiliate, posted a photo of him wearing brownface when he was a school teacher in 2001.

Trudeau, speaking at a news conference today, expressed regret for his actions.

"But ultimately, the call is mine on when to talk to people, when to act on things," he said. "The buck stops with me and I take responsibility." 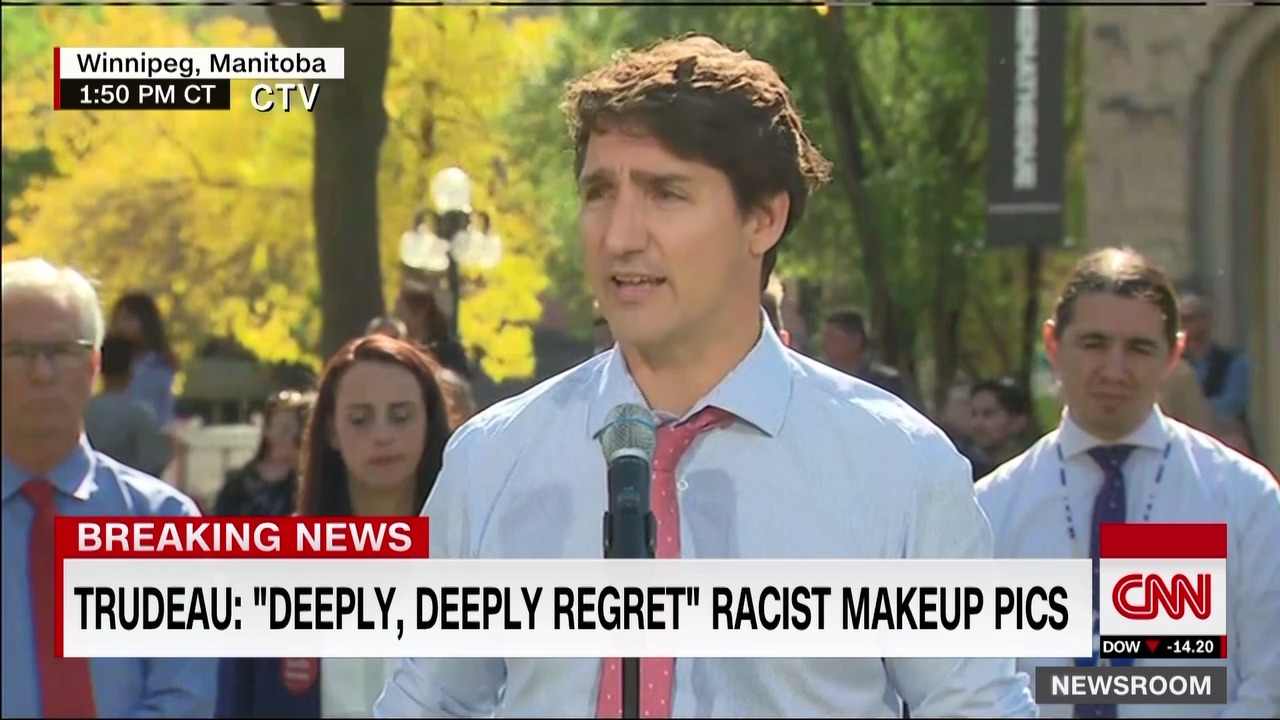 Canadian Prime Minister Justin Trudeau was just asked when did he first realize that wearing blackface was racist.

He pointed to the diversity of the crowd gathered in Winnipeg, Manitoba, to watch him speak, and said serving as a leader for diverse populations made him realize that blackface and brownface are wrong.

“Fighting for them, defending them” made it “very, very clear to me," he said.

He added that dressing up as he did in the newly surfaced photos is "absolutely unacceptable."

The first photo that surfaced was taken in 2001.

"Even though we've moved forward in significant ways as a government, what I did, the choices I made, hurt people — hurt people who thought I was an ally," he said at a news conference moments ago.

"I am an ally, but this is something that obviously I deeply regret and I never should have done."

A little context: In office, Trudeau has held progressive opinions. He has proudly proclaimed he is a feminist and proposed legislation to tackle gender pay equity. He has personally welcomed Syrian refugees to the country. And he has offered formal apologies on behalf of the Canadian government for how it treated indigenous people and LGBTQ2 people. 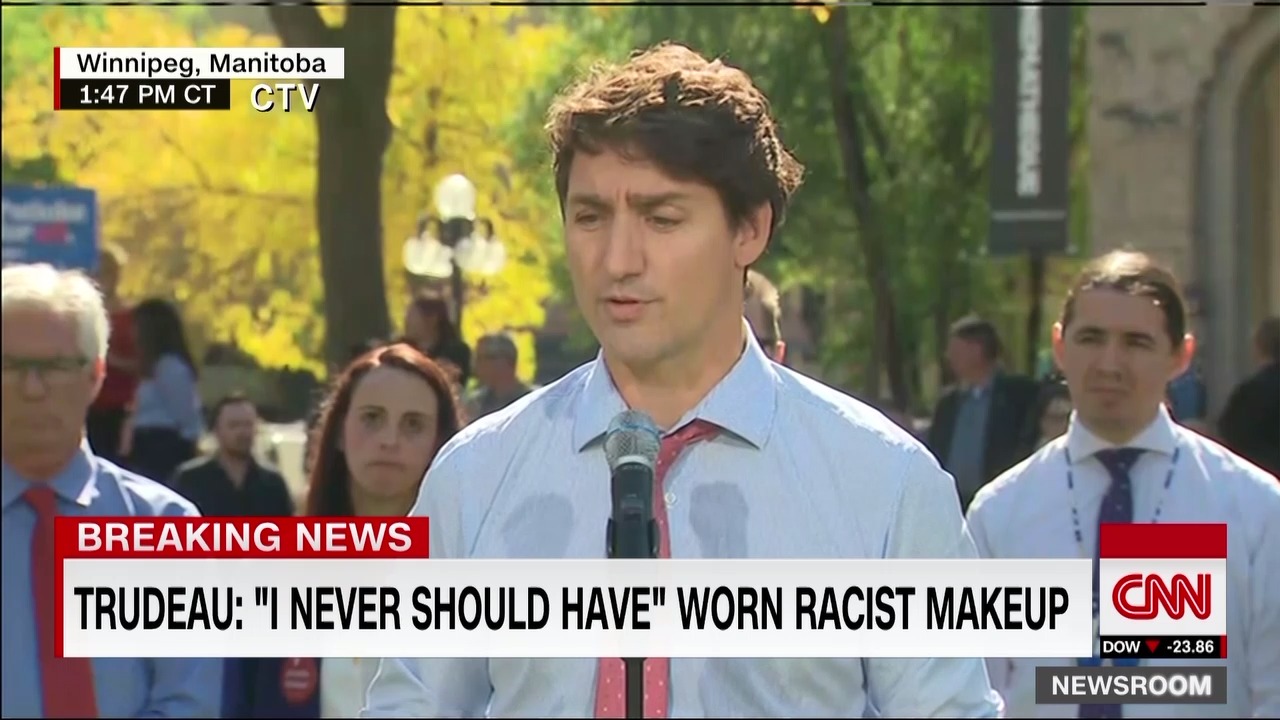 Asked how many times he wore racist makeup, Trudeau said he already shared "the moments I recollected."

"But I recognize that it is something absolutely unacceptable to do. And I appreciate calling it makeup, but it was blackface, and that is just not right. It is something that people who live with the kind of discrimination that far too many people do because of the color of their skin or their history or their origins or their language or their religion face on a regular basis, and I didn't see that from the layers of privilege that I have. And for that I am deeply sorry, and I apologize," he said. 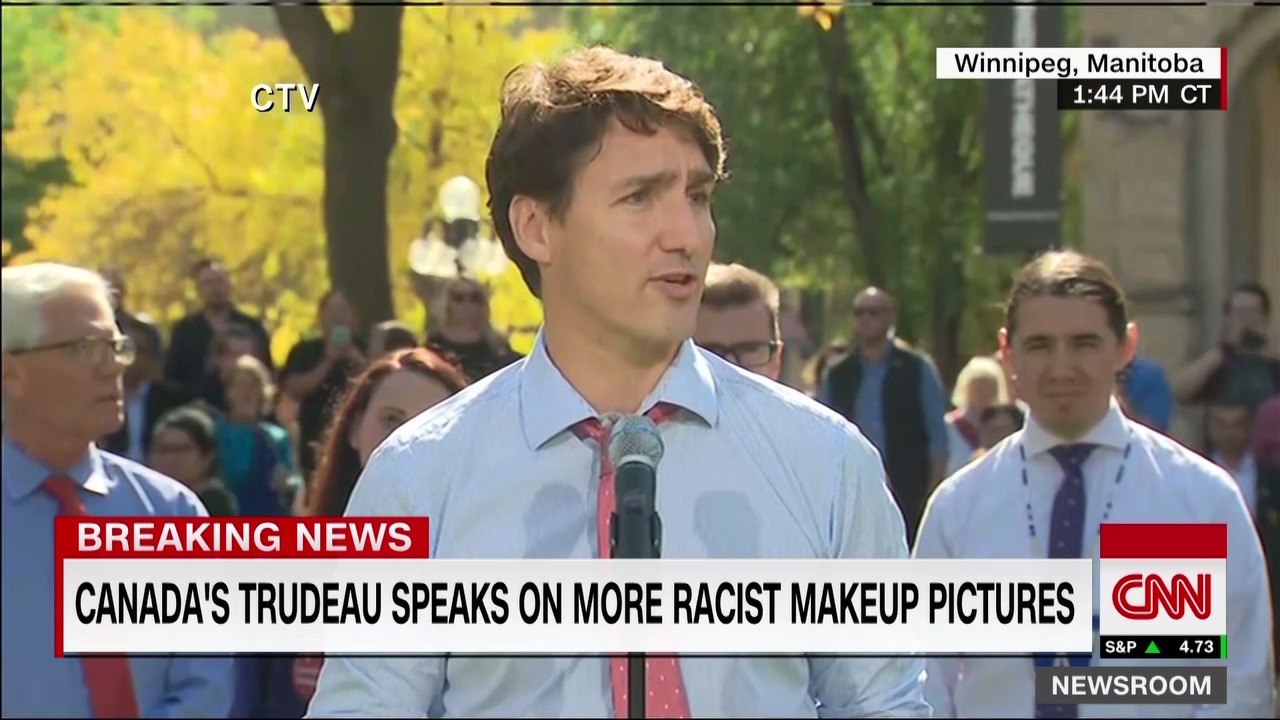 Trudeau said he "hurt people who shouldn't have to face intolerance and discrimination because of their identity."

"This is something that I deeply, deeply regret," he said.

"Darkening your face — regardless of the context, of the circumstances — is always unacceptable, because of the racist history of blackface. I should have understood that then, and I never should have done it."

Two photos and a video of Canadian Prime Minister Justin Trudeau wearing racist makeup have emerged amid an escalating scandal for the liberal politician.

It all started Wednesday, when Time, a CNN affiliate, posted a photo of him wearing brownface when he was a school teacher in 2001. In his apology, Trudeau admitted he had also put on makeup when he was in high school as part of a talent show in which he sang "Day O."

Global News reporter Mercedes Stephenson obtained video of Trudeau in darkface from a Conservative Party of Canada source. The source told her the video was shot in the early ‘90s, specifically sometime around 1993-1994.

Stephenson also spoke to the person who shot the actual video. The person declined to comment, but did not deny that the video shows Trudeau.

The Office of the Prime Minister of Canada referred all calls to the Liberal Party of Canada.

Liberal Party spokesperson Zita Astravas told CTV, a CNN Network partner: “We can confirm that it is him and it’s from the early 1990s.