Royal split: The tour program then split, with Harry departing for a working visit to Botswana. Over the coming days, he will also travel to Angola and Malawi.

Meghan's first solo engagements: The duchess will remain in South Africa. She joined a round-table discussion on women in business and visited a charity that trains women with HIV as frontline health workers.

We're going to bring our latest updates on Archie's appearance during the royals' South African tour to a close. Head here for more coverage of Archie's debut. 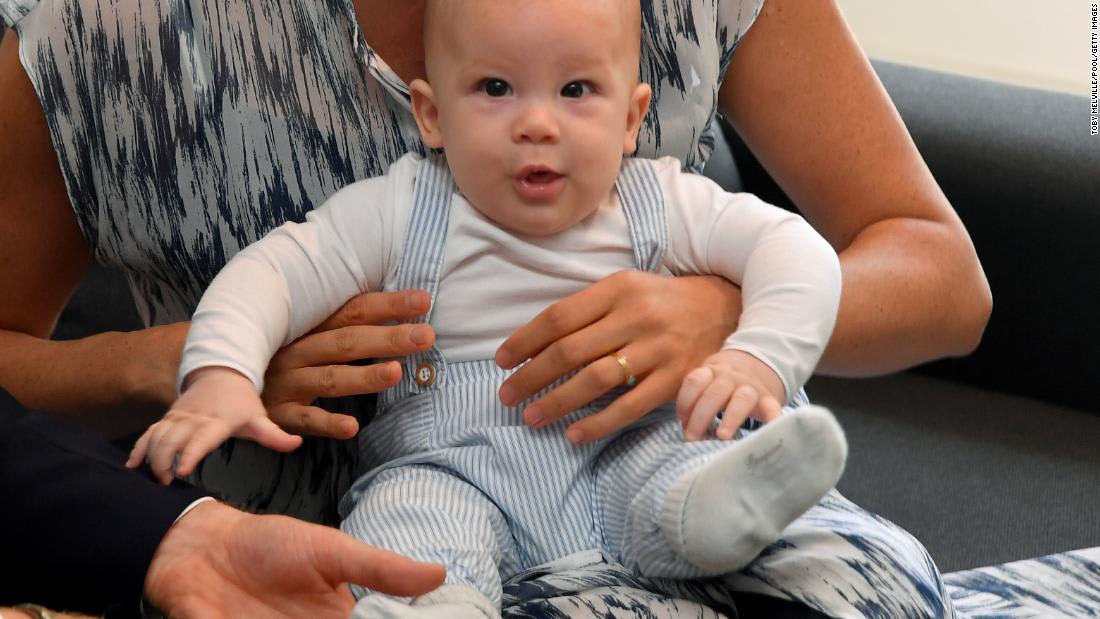 While visiting the Desmond & Leah Tutu Legacy Foundation on Wednesday, Archie, Meghan and Harry received a special basket of presents.

According to the UK’s PA Media news agency, the four-month-old was given an illustrated copy of a book written by Archbishop Desmond Tutu, called “Desmond and the very mean word.”

The book centers around a memory from Tutu's South African childhood, PA Media reported. In the story, a young Desmond is full of pride at the prospect of taking his new bicycle for a ride around his neighborhood but is hurt when a group of boys shout a mean word at him. The book reveals how he discovers compassion despite the upset.

Archie was also presented with other gifts including a book of Children’s Bible Stories and a children’s songbook featuring work by Patricia Schonstein, who founded a pre-school in South Africa in 1984, in open defiance of apartheid regulations.

Harry was given a framed photograph of his mother Diana meeting Nelson Mandela in 1997. A second copy was given to him for his brother, William, the Duke of Cambridge, PA Media reported.

The wait is over -- Archie has made an appearance during the royal tour to South Africa.

All week, eagle-eyed royal fans had been waiting for a glimpse of the four-month-old royal.

On Wednesday, he finally joined his parents in front of the cameras at a meeting with Archbishop Desmond Tutu.

Cue the sighs and "isn't he cute?" comments as pictures emerged of the adorable tot in his mother's arms.

Archie was dressed for the occasion in a pair of simple blue and white-striped organic cotton dungarees from popular clothing company, H&M. Retailing for £12.99 (around $16), his outfit is from the brand's Conscious collection, suggesting his mom's desire to dress sustainably appears to extend to what she dresses her son in as well.

Throughout the trip, Meghan has been praised for recycling a number of her outfits.

On Tuesday evening, she appeared in the striped Marvin Grant maxi dress she had previously worn on Sydney's Bondi Beach during the couple's Commonwealth tour last fall.

Earlier in the week, Meghan also reused a blue Veronica Beard shirt dress from the same tour for her visit to the District Six museum in Cape Town.

After all the excitement of this morning, the royal itinerary splits now, with Harry heading off to Botswana for a working visit.

Meghan took a short break over lunch and is now stepping out for her first solo engagements of the tour.

Her first stop is the Woodstock Exchange where she is meeting female entrepreneurs and investors working in the tech industry. Later, she will head to mothers2mothers, a charity that trains women with HIV as frontline health workers.

And for those wondering what Archie will be up to, he is staying behind with his mom in Cape Town. The family will reunite in Johannesburg early next week.

As well as treating us to Archie’s first appearance here in Cape Town, the Duke and Duchess of Sussex have opened up about parenting at other engagements on the royal tour.

On Tuesday, Meghan and Harry told wellwishers in Cape Town that their baby son has been enjoying his visit to the city.

Meghan “said Archie is the most calm, beautiful, easy baby,” Nazli Edross-Fakier, 61, told CNN, adding that the new mother had told her: “He travels well — he slept most of the time on her chest. And then Daddy said, 'He’s come alive, he’s shouting and screaming and carrying on.'”

During their visit, the family served the royals tea and koeksisters, a popular doughnut-like South African snack, flavored with cinnamon, aniseed and cardamom.

“They were like two normal people that came into our home." said Edross-Fakier. "There was nothing ostentatious or pretentious about them and I think they were just happy to be sitting down, taking a breather from all the people and the cameras.

The Official Twitter account of the Desmond & Leah Tutu Legacy Foundation has posted a series of photographs from this morning's event with the Sussexes.

In one shot, Prince Harry can be seen hand-in-hand with the 87-year-old Nobel laureate while a separate group photograph shows off one of the gifts the family received -- a framed image of Harry's mother Diana meeting Nelson Mandela during her visit in 1997.

A third image posted by the account highlighting the "GENERATIONAL MIX" shows the group sat around the coffee table -- all eyes on Archie, obviously.

CNN's Royal Correspondent Max Foster points out that while the Archbishop's daughter, Thandeka Tutu-Gxashe may have joked about all the cameras at Wednesday's meeting, the event did mark a significant milestone for the Baby Sussex.

"The reality is [that] this is the first experience of a lifetime of media moments for young Archie, so a big moment in his life," Foster reported.

“We shouldn’t forget that this is a rare appearance by Desmond Tutu — this aging icon of the anti-apartheid movement here. He’s not seen very often in public so this was a historic piece of video in two senses," he continued.

In the accompanying post, the royal couple said they were "honored" to be able to present their son to "one of the world’s great champions of equality."

A follow-up post on the account shared a black and white photograph of Archie in the arms of his mother while receiving a kiss on the forehead from retired Archbishop Desmond Tutu.

Little Archie was the star of the show when the Sussexes met Archbishop Emeritus Desmond Tutu on Wednesday.

The royals were welcomed by Nobel Peace Prize winner Tutu and his daughter, Thandeka Tutu-Gxashe on a visit to their legacy foundation in Cape Town.

Inside, the group sat down around a coffee table laden with an impressive display of snacks.

The group shared a laugh over the number of cameras clamoring to get shots of the young royal. The UK's PA Media news agency reports that Harry said "he is used to it already."

Tutu-Gxashe joked: "You like the ladies," to the baby, adding: "He's going to be a ladies' man."

During the meeting -- which lasted roughly half an hour -- PA Media reports Tutu said he was "thrilled" by the "rare privilege and honor" of meeting the young British royals.

Wednesday's meeting was not the first time Prince Harry has met the 87-year-old retired archbishop.

In 2015, he presented the South African statesman with the Insignia of an Honorary member of the Order of the Companions of Honour on behalf of the Queen, recognizing his services to UK communities and International Peace and Reconciliation.

Tutu, the first black archbishop of Cape Town, received the Nobel Peace Prize in 1984 for his efforts to end apartheid.