Our live coverage of this story has ended. Read our latest story on what you need to know about the conflict in Ethiopia here.

One of the rebel groups in Ethiopia claims to have forces about 25 kilometers (15 miles) from the center of the capital Addis Ababa and says government troops are defecting to the rebels, but CNN cannot independently confirm either assertion.

Odaa Tarbii, a spokesman for the Oromo Liberation Army (OLA), tweeted late Wednesday: “Today, 1,165 Oromia Special Forces defected to the OLA. 400 of them joined OLA forces in the vicinity of Laga Tafo. Our forces continue pushing on from all directions, we r very close to seeing the end of this oppressive dictatorship.”

The OLA is an outlawed armed group from Oromia, Ethiopia's most populous region.

Laga Tafo lies just northeast of Addis Ababa. But an eyewitness in the town told CNN Thursday morning that there was no sign of rebel fighters there, schools were in session as usual, and life seemed normal except for communications disruptions.

And a journalist based in Addis Ababa also told CNN Thursday that the outskirts of the city were quiet, with no rebel fighters visible.

As they have pushed the front line further south, fighters loyal to the TPLF, known as the Tigray Defense Forces (TDF), have allied with the OLA.

The rapid advance of the fighters, who said they had seized Dessie and Kombolcha, two key towns of on the road to Addis Ababa, has raised concerns among Ethiopia's leaders that the capital could fall.

It is unclear, though, whether the rebels have the firepower to take the city and there are conflicting reports as to how close they are to the capital.

CNN has attempted to contact both the OLA and the TDF about the location of their fighters, but neither answered on Thursday.

A 10km run scheduled for November 14 in Ethiopia’s capital Addis Ababa has been postponed due the state of emergency in the country, organizers announced Thursday.

Race organizers said they had made the decision “with regret” to delay what they call “the biggest road race in Africa.”

They said a new date would be announced shortly.

When Ethiopian Prime Minister Abiy Ahmed received the Nobel Peace Prize in 2019, he was lauded as a regional peacemaker. Now, he is presiding over a protracted civil conflict that by many accounts bears the hallmarks of genocide.

In November 2020, Abiy ordered a military offensive in the country's northern Tigray region and promised that the armed dispute would be resolved quickly. One year on, the fighting is threatening to spiral into an all-out war that could destabilize the wider region.

Ethiopia was struggling with significant economic, ethnic and political challenges long before a feud between Abiy and the region's former ruling party, the Tigray People's Liberation Front (TPLF), bubbled over into unrest.

But now, with escalating hostilities in other areas of Ethiopia, fears are growing that the fighting in Tigray could spark a wider crisis.

Take a closer look at the situation: 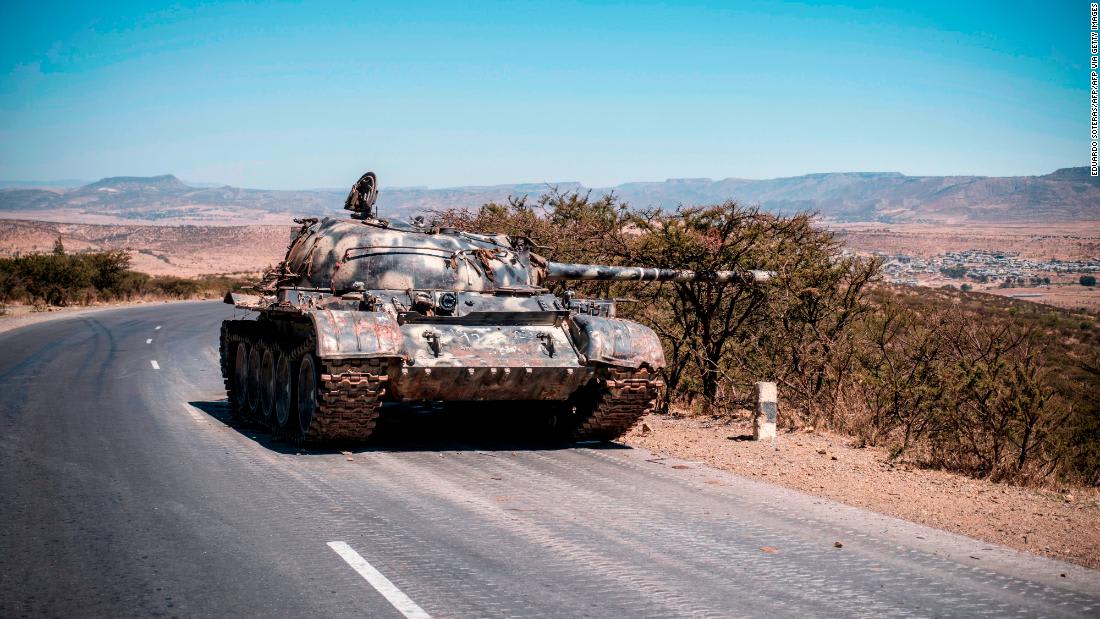 Ethiopia is at war with itself. Here's what you need to know

A six-month state of emergency announced by Ethiopian authorities earlier this week was formally approved by the country's House of People's Representatives on Thursday morning, state-affiliated Fana TV reported.

The legislature’s approval is the final step in the process, meaning the state of emergency is now official.

The provision, originally announced by Ethiopian Attorney General Gedion Timothewos on Tuesday, allows for the conscription of citizens who own firearms and are of age for military service, road blocks, communication outages, the search and arrest of people deemed cooperating with "terrorist groups," among other things.

The age for military service in Ethiopia is 18.

This move comes a year to the day after Prime Minister Abiy Ahmed ordered the military assault against Tigrayan forces in the north of the country that sparked the current conflict.

The European Union on Thursday joined calls from the United States for an immediate ceasefire in Ethiopia, warning that the fighting there has created a "devastating humanitarian crisis" and reiterating that there is "no military solution" to the conflict.

As rebel forces have pushed the front line further south, the US and the United Nations have also voiced their concern over the deteriorating situation.

A State Department spokesperson said Wednesday that the US was growing "increasingly troubled by the expansion of combat operations and intercommunal violence in Ethiopia" and called on Ethiopians to "commit to peace and resolution of grievances through dialogue."

US Secretary of State Antony Blinken on Monday said Washington was alarmed over reports that Tigrayan forces had taken over two towns on the road to the Ethiopian capital, and urged all parties to begin ceasefire negotiations.

The US is preparing to issue sanctions against parties to the conflict, under an executive order signed by President Joe Biden in September, according to senior Biden administration officials.

UN human rights chief Michelle Bachelet told CNN Wednesday she was "very concerned" about the recent escalation of violence in Ethiopia, which she said, "could lead to a real civil war with a lot of bloodshed and with a lot more pain and suffering." It also risks fragmenting Ethiopia as a state, she added.

Bachelet made the comments after the release of a joint investigation by the UN Human Rights Office and Ethiopia's state-appointed human rights commission, which found that "all parties" in the Tigray conflict were culpable for carrying out atrocities.

Bachelet called on all groups to "heed the repeated calls to end hostilities and seek a lasting ceasefire."

A former United Nations employee in Ethiopia has called a new report on human rights violations in Tigray a “good starting point,” but highlighted the severe limitations the UN and non-governmental organizations face in the region.

Speaking on CNN’s Connect the World, he said the joint investigation by the UN Human Rights Office and Ethiopia's state-appointed human rights commission -- which found all parties in the conflict to be in gross violation of human rights -- didn't go far enough.

A “proper independent investigation holds all responsible to account," he said.

Since fighting broke out between the Ethiopian government and Tigray's regional ruling party, the Tigray People’s Liberation Front (TPLF), in November 2020, the government has restricted access to the northern region, hampering humanitarian relief distribution. Last month, Ethiopia ordered seven senior UN officials to be expelled from the country, including from organizations coordinating aid efforts, accusing the officials "meddling in the internal affairs of the country." The UN has strongly denied that claim.

Del Conte said the government’s continued actions against these organizations is sending “an explicit threat to the NGOs.”

None of this is meddling, this is basic humanitarian work, and the threat must be addressed by the Security Council and the UN Secretary General,” he said.

Del Conte was UN-OCHA Deputy Country Director in Ethiopia from 2012 to 2016, a period of two severe droughts in the region. The UN was responding to people’s chronic needs by supporting the government system and structures -- a dramatic difference, he says, from what the UN is experiencing now.

The way in which humanitarians work during times of conflict is different during times of peace,” he said. “The threat of suspending your program or being expelled from the country means that you have to balance the needs of the population and the work you’re doing with a need for speaking out about what’s occurring.”

Kenya has ramped up security along its border with Ethiopia as fighting intensifies there, a police spokesman told CNN Thursday.

“We’re on high alert along our 800km-long (500 mile) common border with Ethiopia. We have enhanced security with patrols, roadblocks on major roads from the border and normal surveillance. There has been no influx of people and all is calm right now,” Kenya police spokesman Bruno Shioso said.

The State Department on Wednesday authorized the departure of non-emergency government personnel and family members from Ethiopia “due to armed conflict, civil unrest, and possible supply shortages,” according to a security alert from the US Embassy in Addis Ababa.

U.S. citizens in Ethiopia should consider departing now using commercial options. Those planning to remain should ensure they have sufficient provisions stocked in case they need to shelter in place,” the alert said.

On Tuesday, the State Department raised its travel advisory level to the highest -- Level 4: Do Not Travel -- after Ethiopian authorities announced a nationwide state of emergency amid escalating violence.

State Department spokesperson Ned Price reiterated on Wednesday that the US is “gravely concerned by the escalating violence" and "the expansion of the fighting" in northern Ethiopia and other parts of the country.

Price also confirmed that America's special envoy for the Horn of Africa, Jeffrey Feltman, will travel to Ethiopia on Thursday.

We call on all Ethiopians to commit to peace and resolution of grievances through dialogue and Ambassador Feltman in his travels there, will have an opportunity to continue the discussions that have been ongoing, including with the Ethiopian government for some time now,” Price said.

The government of Ethiopian Prime Minister Abiy Ahmed refused a visit from him as recently as last month, according to a senior administration official, and it is unclear who in Ethiopia's government Feltman will meet with during his trip.

The African Union's chair, Moussa Faki Mahamat, who is based in Addis, said that he had met with Feltman to discuss developments in Ethiopia on Thursday.