It’s almost time for the unhappiest part of the holidays: Getting there. Holiday travel is going to be more expensive than ever, and in some places, snowier too. We hope all your season’s obligatory journeys are safe and reasonably-priced.

Now, let’s Get Up to Speed and On with Your Day.

Details are still rolling in after a mass shooting at an LGBTQ nightclub in Colorado Springs, Colorado, this weekend. A 22-year-old gunman allegedly killed at least five people and injured 25 others when he opened fire at Club Q just before midnight on Saturday. The gunman was subdued and is in police custody. The suspect has a history of violence: Police confirmed he was arrested in June 2021 after a standoff at a home where his mother lived. During that incident, he reportedly made a bomb threat and other threats of violence. The shooting has shaken the area’s LGBTQ community. According to residents, Club Q was “a second home full of chosen family” for the LGBTQ community in Colorado Springs, the state’s second-largest city. Colorado Gov. Jared Polis, the nation’s first openly gay governor, called the attack “horrific, sickening and devastating.” President Biden responded to the tragedy with calls for gun reform and a plea to end LGBTQ hate.

The 2022 World Cup is underway in Qatar, set against a backdrop of controversy regarding the country’s human rights record. In the years and months leading up to the event, critics have cast a wary eye on Qatar’s treatment of migrant workers, its laws around homosexuality and attitudes towards women in society. Workers who built the infrastructure for the event have described extremely difficult conditions, unpaid wages, and several deaths among their ranks. Some players and countless soccer fans have spoken out about their belief that the sport should be inclusive – a sentiment they say runs counter to Qatar’s laws. Before Sunday’s kickoff, FIFA President Gianni Infantino went on an explosive tirade against Western critics of the event. The opening day of play marked the World Cup debut of the Qatari team, which fell to Ecuador 0-2. Learn more about the teams here, and if you’re feeling ambitious, work on your pronunciation of Qatar here.

Elon Musk reinstated former President Donald Trump’s Twitter account over the weekend, continuing his wave of controversial decisions as the social media platform’s new owner. In the aftermath of the January 6, 2021, attack on the US Capitol, Trump was banned from Twitter and several other platforms on the grounds of inciting violence. Musk claimed to base his decision to reverse the ban on a Twitter poll. If Trump returns to Twitter, where he held significant influence during his presidency, it could change the course of the 2024 election season as well as the texture of the Republican party, which is still struggling to find an identity outside of Trump’s influence. However, Trump himself appears to still be weighing the idea. He praised Musk’s decision but questioned whether the site would survive its current crises. In the meantime, Trump continues to post on Truth Social – the platform he launched after his Twitter ban.

House Republicans are planning next year’s leadership after winning control of the chamber in the midterm elections. Current House Minority Leader Kevin McCarthy is poised to take over as Speaker of the House next year after winning a vote from his Republican colleagues, but some notable GOP members want a change. GOP Rep. Adam Kinzinger lambasted McCarthy on Sunday, saying he doesn’t think McCarthy will last long as speaker and will have to cut deals that will divide the Republican majority. Meanwhile, Rep. Jim Comer of Kentucky, who will likely be the next chairman of the House Oversight Committee, said the chamber’s investigation into classified documents found at Trump’s Mar-a-Lago estate “will not be a priority” once he’s at the helm.

The COP27 UN Climate Summit in Egypt ended with a historic resolution to help climate victims but fell short of curtailing fossil fuel usage. Negotiators from nearly 200 countries agreed to set up a “loss and damage” fund meant to help vulnerable countries cope with climate disasters. They also agreed the global community needs to cut greenhouse gas emissions nearly in half by 2030. However, an attempt to address fossil fuels – the biggest source of the planet-warming emissions that are causing the climate crisis – was stonewalled by a number of nations, including China and Saudi Arabia. Without their support, a key proposal to phase out all fossil fuels failed. There is a little more good news, though. The US and China, the world’s two largest greenhouse gas emitters, have resumed formal climate talks after the latter froze negotiations this summer.

A 5.6-magnitude earthquake has hit Indonesia’s West Java province. At least 46 people have died and more than 700 are injured, according to the country’s National Agency for Disaster Management.

Beyoncé and Taylor cleaned up YET AGAIN.

No one needs to know how much of a book hoarder you are if they’re all stored on one device!

Snoop Dogg has launched a line of luxe dog clothes

This feels like an extremely Snoop Dogg thing to do.

How Jell-O lost its spot as America’s favorite dessert

Just a guess, it was probably when people started putting tuna in it.

I couldn’t pick a favorite Taylor Swift song pun so have two:

That’s how much failed cryptocurrency exchange FTX says it owes its 50 biggest creditors. The powerful crypto company collapsed in very public style after it filed for bankruptcy, leaving about 1 million customers and other investors with billions in losses.

“This is terrifying and must stop.”

– United Nations children’s agency UNICEF in a statement about reports of children being killed, injured and detained in Iran. The agency said an estimated 50 children have reportedly lost their lives in the public unrest in the country, which has continued for more than two months. Protesters and human rights advocates blame the Iranian government for hundreds of deaths and thousands of detainments during the unrest. 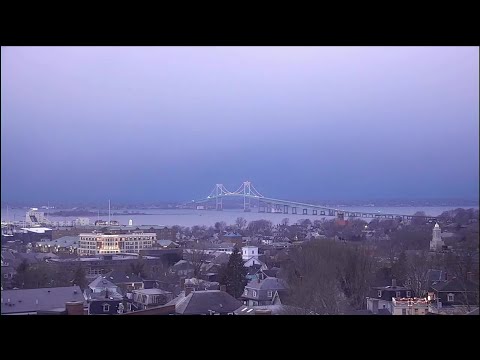 Snow squalls are terrifying! Just watch how the horizon disappeared when a squall rolled into Newport, Rhode Island in February. (Click here to view)