NASA’s Artemis I mission that launched Wednesday has shared a spectacular view of Earth on its way to the moon. If you often marvel at space and its endless expanse, you may also enjoy tracking the spacecraft in real time as it travels thousands of miles away from our planet.

Republicans will win the House of Representatives, CNN projects, after passing the threshold of 218 seats needed for control of the chamber. The victory falls short of the GOP’s hopes of a “red wave” but will thwart President Joe Biden’s domestic agenda and will likely subject his White House to relentless investigations. The GOP win, on the other hand, could create an environment where both parties are more productive than you think – as research shows the US government actually overperforms during periods of divided government. The House win for Republicans also means House Minority Leader Kevin McCarthy is in line to be the next speaker and will bring an end to Democrat Nancy Pelosi’s second tenure in January. Pelosi is expected to “address her future plans” today, her spokesperson said, with many anticipating she may step aside for a new generation of leadership.

Amazon has confirmed it has begun laying off employees, a few days after multiple outlets reported the e-commerce giant planned to cut around 10,000 people this week. Amazon’s layoffs come as several major tech companies are significantly scaling back their workforces as people return to pre-pandemic habits. Facebook parent Meta recently announced 11,000 job cuts, the largest in the company’s history. Twitter also announced widespread job cuts after Elon Musk bought the company for $44 billion. Musk has given employees until this evening to commit to “extremely hardcore” work or else leave the company, according to a copy of an internal email sent by the billionaire and obtained by CNN.

Video Ad Feedback
Twitter under Musk shows 'the unwinding of a person' not a company: Scott Galloway
10:17 - Source: CNN

The student accused of killing three University of Virginia football players was denied bail Wednesday as chilling new details emerge. The suspect was on a field trip Sunday with fellow UVA students to see a play in Washington, DC, a university spokesperson said. When the bus returned to the Charlottesville campus, authorities said, the 22-year-old opened fire on the bus, killing the three players. According to a witness, the suspect shot one of the three players while he was sleeping, the Albemarle County prosecutor said. The suspect is in custody and faces several charges, including second-degree murder and counts of using a handgun in the commission of a felony.

President Biden today responded to Ukrainian President Volodymyr Zelensky’s claim that a Ukrainian missile was not responsible for a deadly explosion in Poland on Tuesday that killed two people. “That’s not the evidence,” Biden told reporters at the White House after returning from the G20 summit in Bali, Indonesia. Polish officials say it is likely that a Ukrainian missile, deployed by its air defenses amid waves of Russian missile attacks, fell inside Polish territory. Meanwhile, Russian shelling and missile strikes continued to target civilian infrastructure overnight, including gas and electricity facilities, according to Ukrainian officials. Russia’s renewed attacks on civilian infrastructure come after Moscow’s forces fired around 100 missiles on at least a dozen cities and districts in Ukraine on Tuesday.

Yale and Harvard law schools, two of the premier law schools in the country, announced they are parting ways with U.S. News & World Report’s rankings of best law schools. The schools are bowing out after criticizing the publication’s methodology, arguing that the list actively perpetuates disparities in law schools. Given the elite status of Yale and Harvard, the move is significant and could signal a greater shift away from college rankings. For years, policymakers and those working in higher education have dismissed the rankings, though they are still referenced by potential students and their families. The decisions have been met with praise, but some questioned whether the move, if followed by other schools, would make it more difficult for the average person to choose to which colleges to apply.

The man we know as James Bond ditched his dapper suits to perform a hilarious dance number in a vodka ad. Watch the video here.

Some are asking why Swift’s phenomenally successful album “Midnights” was not nominated for a Grammy this week. Here’s what happened.

Warhol may be best known for his pop art prints of Marilyn Monroe and Campbell’s soup cans, but this piece just joined the most valuable post-war works ever to sell at auction.

Forget feeling overwhelmed in the kitchen this year. Here’s how you can prepare your Thanksgiving feast ahead of time to have a stress-free holiday.

Coffee prices are down thanks to better weather in Brazil

Rain in Brazil is making for a good coffee crop this year, securing supply… but it may not mean much for your cup of joe. Starbucks and other stores are still raising prices amid increasing labor and distribution costs.

That’s how much snow could be dumped on western New York in the coming days as forecasters are now measuring the potential snowfall in feet rather than inches. This week’s lake effect snowfall in and around Buffalo and Watertown is expected to be “paralyzing,” the National Weather Service said. Historical events in the region include November 2000, when many were stranded in their vehicles as two feet of snow fell in less than 24 hours, and the twin storms that made “Snow-mageddon” in 2014 infamous with over 5 feet of snow.

“I still pray for the president. And I pray for the grace to forgive him and all those responsible for that tragic day.”

– Former Vice President Mike Pence, on whether he is still angry with former President Donald Trump for putting his family at risk during the January 6 insurrection. During a CNN town hall on Wednesday, Pence was shown a video of his family fleeing for safety at the US Capitol. Pence reacted to the video with dismay, calling Trump’s rhetoric and behavior “reckless.” Still, he emphasized that he is moving on from being angry because “in the Christian faith, forgiveness is not optional.”“

"Moon River" on Piano for Sharky the Dog 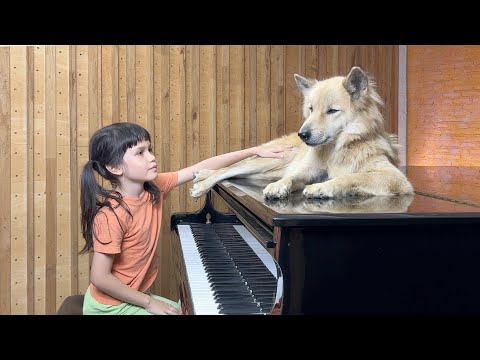 Watch this talented 7-year-old beautifully play “Moon River” for her dog, Sharky. You may recognize this song from “Breakfast at Tiffany’s,” originally performed by Audrey Hepburn. (Click here to view)