Apple launched a new iPhone feature this week that promises to let users contact emergency dispatchers when cell phone service is unavailable. It functions using a network of satellites orbiting above Earth at 16,000 mph. When CNN tested the tool’s reliability, it showed lifesaving potential – but also revealed some significant caveats.

Former President Donald Trump announced Tuesday that he will seek the Republican presidential nomination in 2024. “In order to make America great and glorious again, I am tonight announcing my candidacy for president of the United States,” Trump told a crowd gathered at his Mar-a-Lago residence in Palm Beach, Florida. Surrounded by allies, advisers, and conservative influencers, Trump delivered a speech filled with false and misleading claims about a variety of topics – from his record in office to his Democratic opponents, to the economy, the environment and foreign policy. He is widely expected to be challenged by both conservative and moderate Republicans who could announce their campaigns in the coming months.

The historic Artemis I mission took flight today, paving the way for NASA to return astronauts to the moon for the first time in 50 years. Following months of anticipation and postponed launches, the agency’s rocket lit its engines at 1:47 a.m. ET and hauled itself off the launchpad in Florida, streaking vibrantly across the night sky. Atop the rocket was the Orion spacecraft, which is set to orbit the moon and collect critical data along the way. The uncrewed capsule will complete its journey in about 25.5 days and will splash down in the Pacific Ocean off the coast of San Diego on December 11, when recovery teams will be waiting nearby to haul it to safety.

A federal judge on Tuesday blocked Title 42 – a controversial rule that has allowed US authorities to expel more than 1 million migrants who crossed the US-Mexico border. This leaves the Biden administration without one of the key tools it put in place to address the thousands of migrants arriving at the border on a daily basis and could restore access to asylum for arriving migrants. While the rule was drafted by the Trump administration during the Covid-19 pandemic, the Biden administration has relied heavily on it to manage the increase of migrants at the border. The administration has requested a stay on the ruling for five weeks, according to a court filing.

World leaders are attempting to defuse a potential escalation in the months-long Ukraine war after a Russian-made missile landed in eastern Poland on Tuesday, killing two people. The incident marks the first time a NATO country has been directly hit during the conflict. NATO’s collective defense clause requires all 30 members – including the US, Canada, UK and France – to defend against an attack on another member. It is not known who fired the missile, or precisely where it was fired from. Officials briefed on initial US assessments said it appears the missile originated in Ukraine, even though it was Russian-made. Some analysts believe the missile was fired by Ukrainian forces, trying to intercept a Russian attack.

If you haven’t already, you may want to pull out your winter coats and sweaters. The US has plunged into an early winter this week with an arctic chill in the air for millions across the nation. A low-pressure system across the Southwest is currently sweeping across the Central Plains, bringing with it rain and snow showers. It is the first notable winter weather event of the season for most in the region, according to the Weather Prediction Center. Coastal areas of the mid-Atlantic and Northeast are currently forecast to see a cold rain, as temperatures are expected to remain just above freezing. More than 225 million people across the Lower 48 states will experience temperatures at or below freezing this week, which is about 70 percent of the US population.

Reporters are trained to ignore distractions while recording… but that’s impossible if an elephant wants your attention. Watch the video here.

Some “Star Wars” fans really want to see Baby Yoda in person, but rising ticket prices may make them take an R2-Detour.

Beyoncé led among nominees with nine nods for her album “Renaissance.” See the full list of Grammy nominees here.

The singer left the stage at his Los Angeles concert after performing a few songs and didn’t explain his departure. Watch the crowd’s unhappy reaction.

Take a look at the new marine life found in previously unexplored areas of the Indian Ocean. The footage is remarkable (but equally frightening, I’d argue.)

That’s how many seats Republicans are away from winning the 218 seats necessary to claim a majority in the House of Representatives, according to CNN projections. A total of 11 races remain uncalled and Democrats would need to win all of them to retain control. Six of the 11 undecided races are in California, where the counting of mail-in ballots typically takes weeks. Separately, House Minority Leader Kevin McCarthy won in a 188-31 vote Tuesday to lead the House GOP after an underwhelming midterm election performance launched a search among conservatives for a challenger.

“I’m ready for somebody to pinch me and wake me up and say this didn’t happen.”

– University of Virginia head football coach Tony Elliott, speaking publicly for the first time Tuesday since three of his players were killed in a shooting late Sunday. New details have emerged about the incident, including that the suspected gunman was on a class field trip with the victims before the shooting occurred, a UVA spokesman has confirmed. As the team and community mourn, police are still trying to piece together the details of what led to the deaths of players. 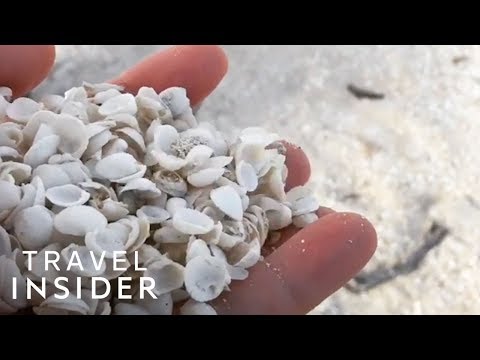 This beach is covered entirely with tiny shells

You won’t find much sand on this beach in Australia. Watch this video to see how it became completely covered in seashells. (Click here to view)