Former President Barack Obama campaigned in Nevada Tuesday night to try to shore up support for Sen. Catherine Cortez Masto, who is widely viewed as the most vulnerable Democrat in the US Senate, urging Nevadans to cast their ballots for her as well as the state’s other Democratic candidates.

Obama’s Nevada visit came as other high-profile Democrats campaign across the country in an effort to get out the vote. President Joe Biden stopped in Florida on Tuesday with Val Demings and Charlie Crist, the Senate and gubernatorial nominees in the Sunshine State. Harris heads to Boston on Wednesday to campaign for Democrats there. And first lady Jill Biden hit the trail in New Hampshire, where Sen. Maggie Hassan is in a tight reelection race, in recent days.

But it’s Obama, whose two-term presidency was a major part of a Democratic shift in the swing state, who was sent to Nevada in the final week before Election Day.

In this economic climate, Cortez Masto’s race against former state Attorney General Adam Laxalt is one of the GOP’s best opportunities to pick up a Democratic seat and gain control of the chamber. Republicans need a net gain of just one seat to flip the evenly divided legislative body, where Vice President Kamala Harris has the tie-breaking vote. The economy has also created headwinds for Democratic Gov. Steve Sisolak and three vulnerable Democratic House members. 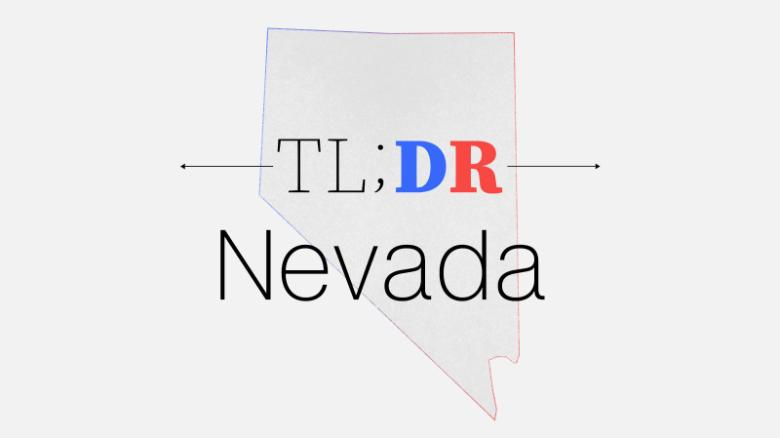 Interactive: Nevada, one of six states to watch for the 2022 midterms

Many Nevadans are angry about an inflation rate that is among the highest in the nation and gas prices that are still averaging nearly $5 a gallon in a state where workers often drive long distances as part of their daily commute. Those issues are driving the dynamics of the race and giving Democrats very little margin for error as they try to hold onto their narrow majority.

Even though President Joe Biden narrowly won Nevada in 2020, he’s not on the trail for Cortez Masto in this race, which has become the third-most expensive Senate contest this fall.

Instead, allies of the first Latina elected to the Senate looked to Obama to help fire up younger voters and Latino voters who might not otherwise turn out in a midterm election. Though working-class voters and Latino voters have helped power previous Democratic wins in the Silver State – particularly when the party was led by former Democratic Sen. Harry Reid – those groups have been disproportionately affected by the double hit of pandemic-era closures and high inflation.

Employment has recovered to pre-pandemic levels in the tourism-dependent state, but voters remain nervous about the current economic climate – still rattled by how hard their state was hit during the pandemic. The unemployment rate in Nevada topped 28% in April of 2020 – about twice the national average at that point.

“Inflation is a real problem right now,” Obama said, addressing the economic pain that many are feeling, particularly in Nevada, and pointing to the legacy of the Covid-19 pandemic and Russia’s war in Ukraine. “So you see, gas prices going up, grocery prices going up – that takes a bite out of your paycheck. It’s no joke. It hurts. The question, though, you should be asking is – who’s going to actually try to do something about it?”

The former President noted that Cortez Masto is a third-generation Nevadan, whose father started out parking cars at the former hotel and casino known as The Dunes.

“She hasn’t forgotten where she came from. Which is why she’s gone after big oil for high gas prices. Why she takes on pharmaceutical companies to lower prescription drug costs,” Obama said. “She’s fought harder than just about anybody in Congress to make housing more affordable. Because she wants to give every family the same opportunities that her family had.”

He argued that Republicans’ answer to everything has been tax cuts. “But what’s their answer exactly? What is their economic policy? … They want to cut Social Security and Medicare and then give their wealthy friends and big corporations more tax cuts.”

Cortez Masto has also tried to deflect Republican finger-pointing for high gas prices, criticizing Laxalt on Tuesday as an ally of “big oil.”

“I’ll tell you what, I am leading the fight to hold big oil accountable for price gouging our families at the gas pump,” she said. “Listen, they’re raising prices on our families while making record profits. Just last week, one big oil company posted $9 billion in profits – that’s outrageous. Outrageous!”

The race between Cortez Masto and Laxalt has been deadlocked for months. The Democratic senator has tried to broaden the conversation beyond the economy by painting Laxalt as an extreme right-winger who would endanger abortion rights in a state where they are protected up to 24 weeks in a 1990 voter referendum. She has also pointed to Laxalt’s efforts to try to overturn Nevada’s 2020 presidential election results on behalf of former President Donald Trump. Laxalt served as Trump’s campaign co-chairman in the state and has his endorsement in the Senate race.

Obama suggested that Laxalt would take issue with the November election if he doesn’t win. “He has no actual evidence of election fraud – because there’s actually no widespread election fraud – but he’s not gonna let that stop him. He’s gonna look under every rock in the desert to try to find an excuse,” Obama said. “Although if he wins, I’m guessing he’ll be less concerned.”

But in a CNN poll conducted by SSRS that showed no clear leader between the candidates, 44% of registered voters cited the economy and inflation as their top issue. Only 14% named abortion.

With the economy ranking as the top concern among voters, Laxalt has gone to great lengths to tie Cortez Masto to Biden, whose approval ratings were underwater, with 38% of likely voters approving of his performance and 58% disapproving in a New York Times/Siena College poll released this week.

When asked by CNN’s Manu Raju Tuesday whether she wanted Biden to join her on the campaign trail, Cortez Masto demurred, saying, “Anybody’s welcome here.”

That answer was similar to one the state’s endangered Democratic Gov. Steve Sisolak, who also appeared with Obama on Tuesday, offered when he was asked whether he had invited Biden to campaign with him during a debate with his Republican opponent Joe Lombardo, who is the sheriff of Clark County.

“A lot of people have offered to come here and there’s gonna be a lot of people coming through here to help get out the vote,” Cortez Masto told Raju, as she also dodged a question about whether she wanted Biden to run for president in 2024. “My focus will be talking to Nevadans about the importance of voting and the distinction between what I have fought for for Nevada and where my opponent is.”

Laxalt has argued that the aid and stimulus packages advanced by Biden and Democrats in Congress have driven up inflation, even though that remains a point of contention among economists.

Democrats, including Cortez Masto and Obama, have pointed out that there are many economic forces at play in driving inflation. The senator has also emphasized the other ways in which Democrats have worked to lower costs, including for health care, prescription drugs and insulin. But that has not yet mitigated the sticker shock that many Nevadans continue to feel at the gas pump and the grocery store.

In a tacit acknowledgment of Obama’s popularity in Nevada, Laxalt directed most of his criticism Tuesday toward Biden and Cortez Masto, accusing the president of turning “an economic recovery into a recession” – even though economists have only warned that a recession might be coming next year – while arguing that Cortez Masto “rubber stamped his agenda every step of the way.”

“Cortez Masto bringing Obama to Nevada to campaign with her today won’t save her in this race,” Laxalt tweeted.

Cortez Masto, who succeeded Reid in 2016, has earned a reputation among her supporters as a hard-working lawmaker who helped steer extensive aid during the Covid-19 pandemic to the hospitality, convention and entertainment industries that are central to the state’s economy. But she has adopted a lower profile than many other senators in Washington, and back in Nevada, much of the population is transient. That has meant that many voters are not familiar with her record.

Laxalt’s campaign is also heavily targeting Latino voters, particularly on economic issues and concerns about rising crime. Cortez Masto’s support among Latino voters appears to have declined from the threshold she won in her first race. About 52% of registered Latino voters supported her, according to CNN’s most recent Nevada poll, compared with the 61% she won according to 2016 exit polls.

And Laxalt has pushed back on Cortez Masto’s attacks on abortion, writing in an op-ed for the Reno Gazette Journal that he would not support a federal ban on abortion and that Nevada voters determined in 1990 “that Nevada is and will remain a pro-choice state.”

Spending in Nevada’s Senate race will reach nearly $109 million between Labor Day and Election Day, including future reservations over the final week of the race, according to AdImpact. Democrats have maintained a slight edge over Republicans – $56.7 million to $51.8 million. The contest is rated as a “Toss-up” by Inside Elections with Nathan L. Gonzales.

David Wright contributed to this report.