As trick-or-treaters gear up for their candy-collecting adventures tonight, safety is a top priority for parents and authorities alike. A number of states are imposing extra measures to protect young ones from harm this Halloween – including having law enforcement conduct home checks on offenders who are banned from having contact with children and barring them from decorating their homes, leaving lights on, or answering their doors.

With a little more than a week to go until Election Day, more than 20.7 million pre-election ballots have been cast in 46 states. As of Sunday, Texas, Florida and California have crossed the 2 million ballot threshold, according to data from elections officials. More than 1.6 million ballots have also been cast in Georgia, where Republican Gov. Brian Kemp and Democratic nominee Stacey Abrams faced off Sunday in their second and final gubernatorial debate. Separately, a top US cybersecurity official said there are no “specific or credible” threats to disrupt election infrastructure during this year’s midterms, even as the federal government remains concerned about attempts – both online and in-person – to interfere in the vote.

Luiz Inácio Lula da Silva has been elected the next president of Brazil in a stunning comeback following a tight run-off race on Sunday. The 76-year-old politician’s win represents the return of the left to power in Brazil and concludes a triumphant personal victory after a series of corruption allegations led to his imprisonment for 580 days. The former leader received more than 60 million votes, the most in Brazilian history, breaking his own record from 2006. But despite the huge turnout from his supporters, he won by a razor-thin margin. According to Brazil’s electoral authority, Lula won 50.90% of the vote and his right-wing rival, incumbent Jair Bolsonaro, received 49.10%. President Joe Biden congratulated Lula saying he looks “forward to working together to continue the cooperation between our two countries in the months and years ahead.”

People in South Korea and around the world are mourning the 154 victims who were killed in a crowd crush in Seoul over the weekend. On Saturday, tens of thousands of people flooded into the narrow alleys of an area in central Seoul to celebrate Halloween, but panic erupted as the crowds swelled, with some witnesses saying it became hard to breathe and impossible to move. Authorities have launched an investigation to find out how what was supposed to be a night of celebration went so horribly wrong. Official memorial altars were set up in the city today, with photos showing crowds visiting to pay their respects. South Korean President Yoon Suk Yeol, his wife, Kim Keon-hee, and top officials – including the prime minister and Seoul mayor – joined the mourners.

The conservative Supreme Court will meet today to consider whether colleges and universities can continue to take race into consideration as a factor in admissions, a case that could diminish the number of Black and Hispanic students in higher education. Challengers in the case are targeting Harvard and the University of North Carolina, arguing that their programs violate equal protection principles, dash the promise of a colorblind society, and discriminate against Asian Americans by setting higher standards for their admission. They are urging the court to overturn a nearly 60-year precedent that has allowed institutions of higher education to give limited preference to people of color and women with admissions. Affirmative action, advocates say, has afforded marginalized people a fair chance to attend colleges and universities that may have otherwise overlooked them.

Elon Musk, Twitter’s new owner, tweeted a conspiracy theory Sunday about the violent attack on Paul Pelosi, the husband of House Speaker Nancy Pelosi. Musk, who has 112 million followers on the platform, posted a baseless article about the attack from a website that purports to be a news outlet and wrote, “There is a tiny possibility there might be more to this story than meets the eye.” He later deleted the tweet, but not before racking up more than 28,000 retweets and 100,000 likes. Musk’s post comes amid concerns about how the billionaire will run Twitter and if misinformation and hate will be given a bigger platform on the site. It also comes as concerns are being raised that Musk’s takeover could impact the upcoming midterm elections if he makes good on his promise to restore the accounts of users who were previously banned from the platform.

Before pumpkins, which items were used to carve jack-o’-lanterns?

If you’re in the mood for wholesome content, watch this family transform their 5-year-old boy’s wheelchair into an epic costume.

Yay or neigh? Some people are paying big bucks for these horse sneakers.

Cavill announced he is moving on from “The Witcher” after three seasons as the leading man on the Netflix series.

But one man has made it his life’s mission to prove the bird is still alive. Check out this interactive story on his efforts.

The 2020 Netflix documentary “Who Killed Malcolm X?” drew major attention to the case. Now, more than two years later, a multimillion-dollar settlement is in the works for two wrongfully convicted men.

D.H. Peligro, a drummer for punk rock icons the Dead Kennedys and formerly the Red Hot Chili Peppers, died Friday from a head injury, his band announced. He was 63. His passion for punk rock and funky music continued with his new band, Peligro, which featured him as a singer and guitarist.

That’s how many people were killed after a suspension bridge collapsed in India’s western state of Gujarat on Sunday, authorities said. Disturbing video shared on social media showed dozens of people clinging to the bridge’s cables and wreckage to escape the water below. Gujarat’s government has launched a criminal complaint against the agency that maintained the bridge. A committee has been established to investigate the incident amid ongoing search and rescue operations today.

“We are harnessing our outrage into positive action.”

– The Jewish Federation and Foundation of Northeast Florida, issuing a statement after multiple antisemitic messages appeared in public spaces in Jacksonville over the weekend. One of the messages was seen scrolling on the outside of TIAA Bank Field during the Georgia-Florida college football game on Saturday. Banners with other antisemitic messages were visible from a highway overpass and at least one downtown building. Several officials condemned the messages in statements Sunday.

Video Ad Feedback
Soggy Halloween for parts of the east and the Pacific Northwest
01:49 - Source: CNN 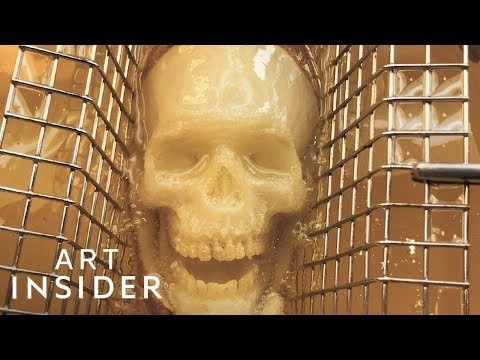 Meet the man that has mastered the art of 3D pumpkin carving. You’ll definitely be impressed by these creations! (Click here to view)