If you’re planning on hitting the streets this Halloween weekend, check your local forecast to make sure the weather won’t spook your plans. While most of the country should be pretty fright-free, there will be some pockets of slightly scary skies in the Pacific Northwest and the Deep South.

The US military will test launch a rocket today with experiments for hypersonic weapons development. This comes after the military completed a successful test launch Wednesday to collect information on components of hypersonic missiles, including heat-resistant materials and high-end electronics. The Pentagon has made the development of hypersonic weapons one of its top priorities after China conducted successful hypersonic launches last year and Russia has begun using hypersonic missiles in its war on Ukraine. Hypersonic weapons travel at speeds greater than Mach 5, or approximately 4,000 miles per hour, making them difficult to detect and intercept in time. The missiles can also maneuver and vary altitude, allowing them to evade missile defense systems. Separately, Biden administration officials on Wednesday said that Russian President Vladimir Putin has been warned of the “potential for dire consequences” if Moscow uses a nuclear weapon to attack Ukraine.

Former President Donald Trump has announced a Florida rally that will prominently feature Sen. Marco Rubio – but will notably exclude Gov. Ron DeSantis, even though he is currently running for reelection in the state. The rally comes as the relationship between Trump and DeSantis, once allies, has grown distant ahead of a possible presidential showdown in 2024. Trump is also annoyed that DeSantis has not said he wouldn’t run in 2024 if the former President entered the race, one source said. Meanwhile, Trump has been accelerating his plans for another presidential bid with recent campaign stops in Nevada, Ohio, Arizona and Michigan. He is also spending the rest of 2022 preparing his political operation – including assembling his campaign leadership, hatching plans for his remaining midterm rallies, and searching for a venue from which to launch his perceived political comeback.

The US has imposed a slew of new sanctions against Iranian officials involved in the ongoing crackdown on nationwide protests in Iran. The Biden administration’s punitive measures on Iran come as the US and Europe work to counter Iran and Russia’s growing cooperation on the war in Ukraine. Russian forces have in recent weeks pummeled Ukrainian cities with Iranian drones. State Department principal deputy spokesperson Vedant Patel said last week that the “deepening” of relations between Russia and Iran should be seen as “a profound threat.” Separately, CNN has obtained exclusive visual evidence surrounding the death of Iranian teenager Nika Shahkarami, a 16-year-old protester who was found dead in Tehran last month. The Iranian government has said she died after falling from a building’s roof, but videos and testimony are raising fresh questions about officials’ claims.

A diver has found more human remains in Lake Mead, marking at least the sixth such discovery this year. The National Park Service confirmed the “finding of human skeletal remains” after the diver discovered what appeared to be a human bone on October 17. This latest finding comes as the water level of the massive lake continues to drop due to a prolonged drought. Declining water levels at the lake have also uncovered relics including sunken boats, a World War II-era landing craft and ancient volcanic rock. Lake Mead, which straddles the Nevada-Arizona border, is the nation’s largest reservoir and serves about 25 million people in Arizona, Nevada, California and New Mexico.

Ford and Volkswagen, two of the world’s largest automakers, are shutting down their joint effort to develop self-driving cars. Ford said Wednesday that it had concluded that the large-scale profitable commercialization of self-driving cars was further out than expected, and therefore would take a $2.7 billion hit to walk away from the startup Argo AI. The company said it is still “optimistic” about a future for fully self-driving cars, but added that “profitable, fully autonomous vehicles at scale are a long way off.” Instead of having Argo develop self-driving car technology for cars without steering wheels, brakes or accelerator pedals, Ford said it will instead focus on simpler driver-assist technologies that have proven easier to develop and bring to market.

In queso you didn’t know, Chipotle is testing a robot named “Chippy” that could debut in several locations soon. See it in action here.

Martha Stewart responds to those wanting her to date Pete Davidson

A growing number of people have expressed their hope that Stewart, 81, would date Davidson, 28… and technically, she didn’t rule it out.

Not long after Prince Charles revealed his unfaithfulness to Princess Diana, she attended a gala in a gown so captivating it has since been known simply as “the revenge dress.”

TikTok has helped spread yet another potentially dangerous idea

That’s how many people were injured Wednesday at a Missouri theme park after sections of a train ride derailed. Six guests and one employee were transported by ambulance to get medical treatment shortly after the incident, the Silver Dollar City theme park said in a statement. The park did not detail the extent of the injuries.

“Skechers is not considering and has no intention of working with West. We condemn his recent divisive remarks and do not tolerate antisemitism or any other form of hate speech.”

– Athletic shoe company Skechers, issuing a statement after embattled musician Kanye West was escorted from one of its Los Angeles buildings on Wednesday. The company said West, who has legally changed his name to Ye, “arrived unannounced and without invitation.” The statement said he was engaged in “unauthorized filming” and he was escorted out “after a brief conversation.” West’s visit to Skechers comes a day after Adidas ended its partnership with the musician due to his recent antisemitic comments.

Swim Safely with Thousands of Jellyfish 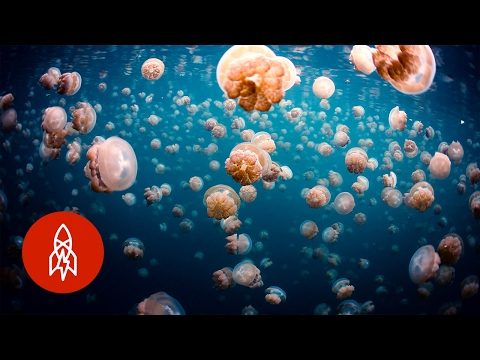 Swimming with thousands of jellyfish

On this beautiful island in Palau, you can swim with a swarm of jellyfish without getting stung. Watch this video to see how. (Click here to view)