The application for President Joe Biden’s student loan forgiveness plan is expected to go live as soon as this week. But the nation is divided over the program, flooding social media platforms with praise or criticism. Additionally, ongoing legal challenges and lawsuits aiming to block the plan are creating a few hurdles for the administration.

Russian President Vladimir Putin has signed into law measures that claim to annex four Ukrainian regions into the Russian Federation, in violation of international law. Western leaders have said the claimed annexations of Donetsk, Luhansk, Zaporizhzhia and Kherson are the result of “sham” referendums, and will never be recognized. This comes as Moscow is losing territory to Ukraine’s military by the day. How Russia plans to hold on to the four regions remains unclear, at least in the short term. Kremlin spokesman Dmitry Peskov previously said Russia will attempt to retake the territory at a later date, and that campaign will likely involve some of the 300,000 reservists being called up as part of a “partial mobilization” ordered by Putin last month.

Former President Donald Trump asked the Supreme Court on Tuesday to intervene in the dispute over the documents that were seized by the FBI from his Mar-a-Lago estate this summer. Trump is specifically asking the court to ensure that the more than 100 documents marked as classified are part of the special master’s review. The emergency request, if granted, could bolster the former President’s attempt to challenge the search in court. Trump has argued that he may have had a right, as a former president, to possess certain government documents – including material potentially containing the country’s most sensitive secrets.

In a major reversal, Elon Musk is now proposing to buy Twitter at full price after attempting to terminate the $44 billion acquisition agreement, which the company had sued him to complete. According to a securities filing on Tuesday, Musk said he would follow through with the deal at the originally agreed-upon price of $54.20 per share. Twitter stock was halted twice on Tuesday when news of the filing was first reported. After the stock resumed trading, it was up more than 20%, topping $51 a share and approaching the agreed-upon deal price for the first time in months. Such an agreement could bring to an end a contentious, monthslong back and forth between Musk and Twitter that has caused massive uncertainty for employees, investors and users of one of the world’s most influential social media platforms.

Residents of one of Florida’s barrier islands will be allowed to return to view their homes today for the first time since Hurricane Ian devastated the state last week. Ian wiped out a portion of the causeway connecting Sanibel Island to the mainland, setting the stage for days of evacuations by air and sea as crews searched for people who were stranded. While residents in this area will be given access to their properties today, officials warn the island remains extremely unsafe with “alligators running around” and “snakes all over the place,” Sanibel Fire Chief William Briscoe said. Crews have evacuated approximately 1,000 people from Sanibel since Ian ripped through the island. Meanwhile, President Biden and first lady Jill Biden are scheduled to visit Florida today to see the destruction firsthand.

NASA and SpaceX are set to send the first Native American woman into orbit today. The astronaut, NASA’s Nicole Aunapu Mann, will serve as mission commander on the trip scheduled to kick off at 12 p.m. ET. Mann and three crewmates will ride on a SpaceX rocket set to take off from NASA’s Kennedy Space Center in Florida. They’ll travel to the International Space Station for a five-month stay, joining a long list of astronauts to serve as full-time staff aboard the orbiting laboratory, which has hosted humans for nearly 22 years. On her trip, Mann will carry some special mementos: her wedding rings, a surprise gift for her family, and a dream catcher that her mother gave her.

Carolyn R. Bertozzi, Morten Meldal and K. Barry Sharpless have won the Nobel Prize for chemistry, for work that has produced “an ingenious tool for building molecules.” The trio’s work has “led to a revolution in how chemists think about linking molecules together,” the Royal Swedish Academy of Sciences said.

Check out this impressive list of the top women CEOs in the world, according to Fortune.

The world’s best bars for 2022 have been revealed

A startup that sells water in beer cans – that’s literally it – is approaching a $1 billion valuation. (This may be a sign to get going on that business idea you’ve been thinking about.)

Kanye West called out for dressing in ‘hate slogan’

Criticism of West was swift over his latest fashion statement.

The two, who married in 2009, have been “living separately” and are “exploring their options” regarding their marriage, sources tell CNN.

Loretta Lynn, the “Coal Miner’s Daughter” whose gutsy lyrics and twangy vocals made her a queen of country music for decades, has died. She was 90. Lynn scored hits with fiery songs like “Don’t Come Home A’ Drinkin’ (With Lovin’ On Your Mind)” and “You Ain’t Woman Enough (To Take My Man),” which topped the country charts in 1966 and made her the first female country singer to write a No. 1 hit.

That’s the amount of America’s national debt after reaching a new milestone this week amid historically high inflation. The nation’s borrowing levels have soared in the past decade, particularly at the height of the Covid-19 pandemic. The outstanding public debt was $10.6 trillion when former President Barack Obama took office in 2009; $19.9 trillion when Trump took office in 2017; and $27.8 trillion when Biden took office in 2021, according to data from the Treasury Department.

– New York Yankees slugger Aaron Judge, after breaking Roger Maris’ single-season American League home run record, hitting his 62nd blast in a game Tuesday against the Texas Rangers. Barry Bonds holds the major league baseball record with 73 home runs in 2001. A fan who caught the ball was escorted from the section of seats by security, according to reporters at the game. Some observers think the ball is worth millions of dollars.

How Rainbow Bagels Are Made 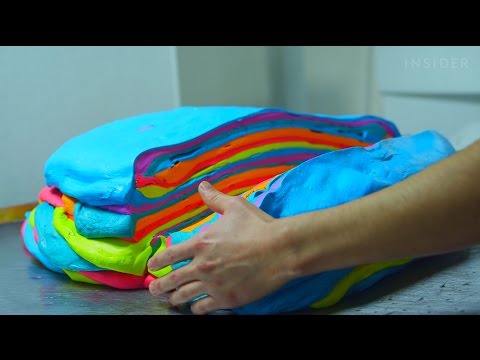 How rainbow bagels are made

Before you enjoy your breakfast, watch this short video to see how “the world’s most beautiful bagel” is made. (Click here to view)