After his mid-race celebrations caught the eye of the athletics world, Letsile Tebogo wants to be remembered as one of sprinting’s greats

In the hours before he coils himself into the starting blocks – a time when many sprinters would be fraught with nerves and tension – Letsile Tebogo finds solace in the soundtracks of home.

“Most of the time, I just listen to music – traditional songs from here in Botswana because they remind me of my roots and where I come from,” says Tebogo. “It’s much easier for me to relax that way.”

That pre-race ritual appears to serve him well. Even in full flight on an athletics track, the 19-year-old is a picture of composure; his long, floating stride and easy running form guiding him to record times on the junior circuit.

His first record was officially confirmed by World Athletics on September 20, while his second time is still pending ratification.

Among the secrets to both performances, Tebogo says, was an ability to put aside any lingering anxieties before stepping onto the track.

“Mental strength is very important,” he tells CNN Sport. “You just need to come with a free mind and enjoy the race because, once you have stress, you cannot run the perfect race you and your coach planned.

“You need to come free-minded … Remove everything that’s on your mind that’s going to be disturbing you on the blocks or when you’re doing your warmup.”

Tebogo clocked a 100-meter time of 9.94 seconds at the World Championships this year.
Naoki Nishimura/AFLO/Shutterstock

Tebogo’s statement performance at this year’s U20 World Championships in Cali, Colombia, established him as one of the most exciting prospects in track and field – not only because of the ease with which he appeared to pull away from the other competitors, but also because of his premature celebrations 30 meters from the finish line.

As he gestured to his right side and wagged his finger in delight, Tebogo suddenly became the talk of the athletics world.

“I just decided to do that in the moment when I was running,” he says. “I wanted it to be a memorable race for me as I leave the juniors.

“I didn’t mean to disrespect anyone on the track … You have to do something for those who are staying up at night to watch you – something to talk about tomorrow or in the near future.” 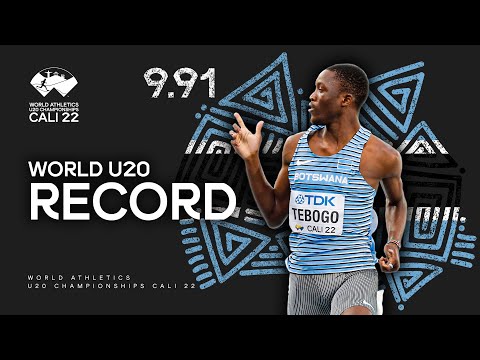 The celebration sparked comparisons to the great Usain Bolt, who, full of confidence and bravado, would grin and spread his arms before crossing the finish line – even while setting world records.

The Jamaican’s legacy still looms large over athletics, meaning onlookers are often quick to label an emerging sprint star as his predecessor.

The young sprinter is hopeful the two can meet in the future – perhaps at next year’s World Championships in Budapest, Hungary – but for now, he can be reassured by the fact that Bolt has watched him race – and acknowledged it on Twitter.

Growing up in Botswana, Tebogo was a talented footballer and only started taking sprinting seriously in his mid-teens when he realized he could have a career in the sport.

While his under-20 records have come in the 100m, he also races the 200m and finished second to Israel’s Blessing Afrifah by six thousandths of a second at this year’s Junior World Championships.

Running side-by-side on the home straight, the pair set a new championship record of 19.96 seconds – a time that puts them joint third behind Bolt and Erriyon Knighton in the under-20 all-time list.

Knighton, like Tebogo, looks to be a star for the future. The 18-year-old has run the eight fastest 200m times of any under-20 athlete, while his personal best of 19.49 seconds, set in April, places him 10th on the senior all-time list.

“It brings a lot of motivation for me to go back and work harder on the process,” Tebogo, who finished 0.02 seconds ahead of Knighton when the pair raced over 100m earlier this year, said about the achievements of his American rival. “It’s going to be a very good run between me and him in the future.”

Tebogo has yet to decide whether he will focus more on the 100m or 200m in the future. He is planning to start at the University of Oregon – basing his training outside of Botswana for the first time – in March and will also make the step up from junior to senior racing next year.

“What I’ve noticed is that for the juniors, when they see me, they are intimidated by me, but with the seniors, it’s the other way around – they are the ones who are intimidating me,” he says. “But with time, I guess I’ll be cool and coming up very well with them.”

After several weeks of rest following the end of the season, Tebogo resumed training on October 1.

He expects a grueling first six weeks before he gets back to the level he was at last season, but then he can begin to contemplate what he wants to achieve in his first season as a senior athlete.

“The ultimate goal when I started athletics was to be remembered, like how Usain Bolt is always remembered,” says Tebogo.

“Even if I’m the second fastest man in the world, it’s still fine. As long as I’m in the top three of the world’s fastest guys – that’s what I’ll be really happy for.”