Three powerful storms are wreaking havoc around the world, prompting officials to issue urgent alerts and evacuation orders. In the Dominican Republic, more than 1 million people are without running water today after Hurricane Fiona ripped through the country. That’s after the storm wreaked havoc across Puerto Rico, leaving the island in a blackout. Damage assessments are still being compiled, but some residents said the flooding and mudslides in the region are reminiscent of the devastation wrought by Hurricane Maria in 2017 – which caused tens of billions of dollars in damage. In Alaska, extreme winds and a storm surge from the remnants of a typhoon were powerful enough to uproot buildings. And in southern Japan, Typhoon Nanmadol has killed at least two people and injured more than 120 others.

The so-called secession referendums in four Russian-occupied regions of Ukraine are set to conclude today. With the results of the Russian-organized voting expected to be announced as soon as this evening, US officials anticipate Russia could move quickly to escalate its faltering war and annex those areas of Ukraine, potentially within days. Doing so would prompt a swift response from the US, which has pledged not to recognize the results. The US is not currently expected to respond until Russia has moved to annex the regions, officials said, and whether Russia ultimately attempts to do so remains to be seen.

An Illinois family has the internet wondering how they created this levitating Halloween decoration inspired by the Netflix show “Stranger Things.”

Should you eat bread?

Bread tastes so good, but we often get messages that, nutritionally, it’s so bad. Here’s expert advice about which loaves are healthier than the rest.

‘The Crown’ gets a new queen

Production of Season 6 of “The Crown” was briefly paused after the death of Queen Elizabeth II, but Season 5 is still on track to start on November 9. Here’s who will take over the role of the Queen.

The reigning baseball champions were invited inside the White House on Monday to celebrate their 2021 World Series win. Check out photos from the event here and see the jersey they gifted to Biden.

Regaining sense of smell and taste after Covid-19

Imagine if your cup of coffee one day had no smell or taste at all. Well, that’s the reality for some people with long Covid. This week on Chasing Life, Dr. Sanjay Gupta and Stanford University smell expert Zara Patel discuss how “smell training” can help some people regain their lost senses after Covid-19.

That’s how many protesters have reportedly been killed in violent demonstrations in Iran over the death of 22-year-old Mahsa Amini, state media outlet the Islamic Republic of Iran Broadcasting said. The death of Amini this month, who was arrested in Tehran by the morality police – a unit that enforces strict dress codes for women – has sparked protests in more than 45 Iranian cities over issues ranging from women’s freedoms to the crippling economic impacts of sanctions in the region.

– Lori Glaze, director of NASA’s Planetary Science Division, celebrating after a spacecraft intentionally slammed into an asteroid Monday in humanity’s first test of planetary defense. The purpose of the DART mission, or the Double Asteroid Redirection Test, was to help determine how NASA could deflect objects that could pose a threat to Earth in the future. The impact occurred at 7:14 p.m. ET Monday and was greeted by cheers from the mission team. Watch the moment DART collided with the asteroid here. 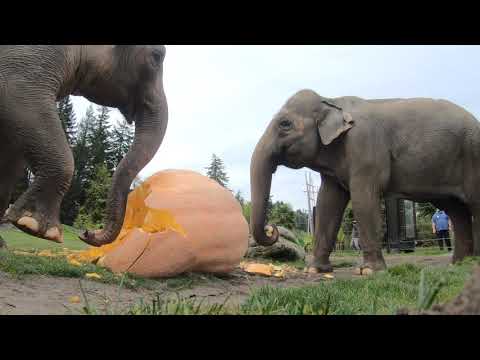 Carve out a few minutes of your day to watch these elephants smash massive pumpkins. Have a gourd Tuesday! (Click here to view)