Former President Donald Trump was dealt double legal blows on Wednesday as he attempts to fend off investigations on multiple fronts. An appeals court handed the Justice Department a victory by allowing it to continue looking at documents marked as classified that were seized from Trump’s Mar-a-Lago residence last month. Three judges, including two appointed by Trump, ruled that the public has a strong interest in ensuring his retention of the material did not cause “exceptionally grave damage to the national security.” Separately, New York state Attorney General Letitia James filed a civil fraud lawsuit Wednesday against Trump, three of his adult children and the Trump Organization, alleging they were involved in an expansive fraud lasting over a decade that the former President used to enrich himself.

The historic streak of falling US gas prices is over. After 98 consecutive days, prices at the pump edged higher on Wednesday– by a penny – to an average of $3.68 a gallon, according to AAA. A 1-cent increase is not likely to have a significant effect on many drivers, but if gas prices begin to rise again, that could undermine the Biden administration and the Federal Reserve’s efforts to keep inflation in check. The last time the national average price for gas rose was June 14, when it hit a record of $5.02. Up until now, gas prices had been plunging due to a series of factors, including stronger supply and weaker demand as drivers balked at high prices, and the unprecedented release of emergency oil reserves by the White House.

The demand for flights out of Russia sharply increased after President Vladimir Putin announced an immediate partial mobilization of Russian citizens on Wednesday. The term “leaving Russia” also saw a spike in searches among Russians over the past 24 hours, according to Google Trends. Since Putin’s announcement, more than 1,300 people have been detained across Russia in a crackdown on anti-war protests. Prosecutors in Moscow warned people against participating in protests and threatened those who refused the draft with up to 15 years in jail. This comes as foreign ministers and senior officials from Europe, North America and South Korea released a joint statement today expressing their “grave concern” regarding the ongoing shelling around nuclear facilities in Ukraine.

The FDA has authorized the release of “numerous batches” of Moderna’s updated Covid-19 booster amid reports of supply problems in some areas. Updated boosters from Pfizer/BioNTech and Moderna were made available early this month, but some pharmacy chains have reported trouble keeping Moderna’s shots in stock. Still, Moderna said it’s on track to deliver 70 million doses of its updated vaccine by the end of 2022. To date, less than half of people in the US who received their initial series and are eligible for a booster have gotten one. Data also shows less than a third of the US population overall has gotten their booster shot.

The subject of the popular podcast series “Serial,” was released Monday after spending 23 years behind bars. Learn more about the case here.

Karamo Brown, one of the stars of the Netflix series “Queer Eye,” has a new daytime talk show and will be giving people advice on life, family and relationships.

These eye-catching park designs are not what you’d expect to see in urban Hong Kong. Take a look here.

Brad Pitt makes his debut as a sculptor in Finland exhibition

hat’s how many hours of flight experience are required of new airline pilots. Regional airline Republic Airways had asked the FAA to loosen commercial pilot hiring standards in order to tackle the global pilot shortage, but the request – which drew immense union opposition – was denied Monday after the agency determined that existing safety regulations should remain in place.

“No one knows whether this process will lead to a recession or, if so, how significant that recession would be.”

– The University of Oregon, issuing an apology after some students yelled a bigoted chant during a recent football game against Utah’s Brigham Young University. Videos of the incident made by a BYU fan show Oregon fans chanting “F**k the Mormons” repeatedly. Several state officials in Utah and Oregon have condemned the hateful speech. The incident is being investigated by university officials.

Strapped to a Bedsheet with Strings: Life at 18,000 Feet 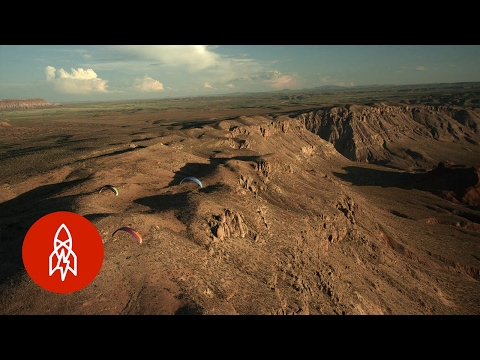 Don’t forget to stop and enjoy the view. This cross-country paraglider flies over stunning places around the world with only a “modified bed sheet and strings.” (Click here to view)