North Korean leader Kim Jong Un has declared victory against Covid-19 and ordered a lifting of maximum anti-epidemic measures that were imposed in May, state media said today. North Korea has not revealed how many confirmed infections of the virus it has found, but has not reported any new suspected cases since July 29. The World Health Organization has cast doubt on North Korea’s claims, saying last month it believed the situation was getting worse, not better, amid an absence of independent data. Analysts say the victory declaration by the authoritarian North could be a prelude to restoring trade hampered by border lockdowns and other restrictions. Observers have also said it may clear the way for North Korea to conduct a nuclear weapon test for the first time since 2017.

Well, the fall season isn’t that far away… maybe this turkey was plotting a clever Thanksgiving escape. Watch the video here.

Before this latest odd flavor, Coca-Cola rolled out Starlight (space-flavored) and Byte (pixel-flavored). This latest one is equally unique.

Disney+ is getting more expensive… unless you want ads

And it’s not the only streaming service that’s going up in price.

Domino’s tried to sell pizza to Italians. It failed.

The American pizza giant made a very bold attempt to win over locals in Italy. The stores are now closing their doors after struggling with sales.

Millions of years from now, these two entangled galaxies will eventually merge into one. Check out the stunning telescope image here.

That’s the amount in subsidies Elon Musk’s SpaceX was slated to receive from the Federal Communications Commission – but that will no longer happen. The FCC had earmarked the funds for SpaceX’s Starlink internet service to provide internet access to people across rural America. But federal regulators on Wednesday said they will no longer fund the venture, citing the fact that the satellite-based service is “still developing technology” and the company “failed to demonstrate that [it] could deliver the promised service.”

– Luis Li, an attorney representing Vanessa Bryant, in court on Wednesday saying that photos from Kobe Bryant’s helicopter crash were shared with dozens of Los Angeles County employees. Vanessa Bryant’s federal lawsuit against LA County claims that sheriff’s deputies captured photos of the victims’ remains, including those of her daughter and husband, and shared them in settings irrelevant to the investigation, including at a bar and an awards gala. Vanessa Bryant, who was in the courthouse, wiped away tears as her attorney described the way sheriff’s deputies captured and shared the photos.

Welcome to the Beautiful City of Paris ... China 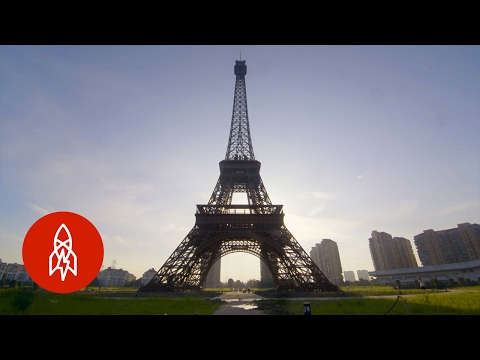 Did you know that the city of Tianducheng, China, was designed to be a replica of Paris? Watch this video for a quick tour. (Click here to view)