Before you purchase those items in your Amazon cart, make sure you scan product reviews for anything suspicious. Amazon is trying to weed out thousands of online groups it says is responsible for orchestrating millions of fake reviews on its site. The company this week said it is using “advanced technology” and “expert investigators” to identify and sue the bad actors, but some of the fraudsters are well-disguised and are actively looking for loopholes to mislead buyers.

The CDC is no longer recommending restrictive measures such as quarantines and social distancing to prevent the spread of Covid-19. In new guidelines released Thursday, the agency announced it is no longer necessary to stay at least 6 feet away from others to reduce the risk of exposure – a shift from the guidance that had been in place since the early days of the pandemic. Now, more than two years later, nearly the entire US population has at least some immunity through vaccination, previous infection, or, in some cases, both. However, the latest guidance does keep some measures the same. It says people who test positive should stay home for at least five days and wear a mask around others for 10 days. It also continues to recommend that people wear masks indoors in about half of the country.

Following the FBI search of former President Donald Trump’s Mar-a-Lago estate on Monday, Attorney General Merrick Garland said that the Justice Department has requested that the warrant and property receipt from the search be unsealed. Trump said in an online post on Thursday that he would “not oppose the release of documents,” adding, “I am going a step further by ENCOURAGING the immediate release of those documents.” The FBI executed a search warrant at the Palm Beach, Florida, resort as part of an investigation into the handling of presidential documents, including classified documents, that may have been brought there. The Washington Post, citing people familiar with the investigation, also reported on Thursday that classified documents related to nuclear weapons were among the items that FBI agents sought when searching the former President’s residence.

An “alarming” situation is unfolding at a Russian-occupied nuclear power plant in southeastern Ukraine, according to the head of the United Nations’ nuclear watchdog. Parts of the Zaporizhzhia nuclear plant – the largest nuclear plant in Europe – have been knocked out due to recent attacks, risking an “unacceptable” potential radiation leak, according to Mariano Grossi, the Director General of the International Atomic Energy Agency (IAEA). “IAEA experts believe that there is no immediate threat to nuclear safety,” but “that could change at any moment,” Grossi said. Russia and Ukraine have so far been unwilling to agree to an IAEA inspection of the plant and have accused each other of shelling the facility. Meanwhile, Ukrainian President Volodymyr Zelensky is calling for the complete withdrawal of Russians from the territory, which he said is putting all of Europe in danger.

Actress Anne Heche, who remains hospitalized after crashing her vehicle into a Los Angeles residence last week, is “not expected to survive,” according to a statement from her family and friends shared with CNN by a representative. “Unfortunately, due to her accident, Anne Heche suffered a severe anoxic brain injury and remains in a coma, in critical condition. She is not expected to survive,” the statement read. Anoxic brain injury occurs when the brain is deprived of oxygen. Last Friday, Heche was in a car that was traveling at a high speed when it ran off the road and collided with a residence that became engulfed in flames, officials said. Heche rose to fame on the soap opera “Another World,” where she played the dual role of twins Vicky Hudson and Marley Love from 1987 to 1991. She earned a Daytime Emmy Award for her performance on the show.

20 of the most beautiful small towns in Italy

‘Nope’ premieres in US theaters today

The reviews are in, and critics are giving a big yes to Jordan Peele’s latest movie, the alien-invasion thriller “Nope.”

Prince George is 9! The Duke and Duchess of Cambridge share a photo of him on the eve of his birthday

So adorable! The little prince is really growing up right before our eyes.

Festivalgoers at Splendour in the Grass 2022 were excited for a lineup of A-list performers like Gorillaz and The Strokes. They got a mud pit instead.

One of Central Park’s prettiest places is closing

This popular boathouse restaurant in New York City will close permanently in October. Get your pictures while you can.

Hollywood icons joined fans worldwide this week to mourn the loss of actress Olivia Newton-John. Which blockbuster movie catapulted her to superstardom?

That’s how many people are accused of sending more than 8 billion robocalls about “auto warranties” since 2018. The illegal calls typically begin with recorded lines such as, “We’ve been trying to reach you concerning your car’s extended warranty,” the Federal Communications Commission said in an order Thursday, requiring voice providers to stop carrying the calls. The people behind the alleged scheme are mostly based in Texas and California but also in places as far away as Hungary. The calls were the single largest source of consumer complaints to the FCC in each of the past two years.

“Violence and threats against law enforcement, including the FBI, are dangerous and should be deeply concerning to all Americans.”

– Ed Day, a county executive in Rockland, New York, urging people to get vaccinated against polio after a person from the county was diagnosed with the first case of polio identified in the US in nearly a decade. The unvaccinated young adult began experiencing weakness and paralysis about a month ago, health officials said. About 1 in 4 infected people have flu-like symptoms, but as many as 1 in 200 develop more serious symptoms that include numbness in the legs, an infection of the brain or spinal cord, and paralysis, the CDC said. There is no cure for polio, and paralysis caused by the disease is permanent.

The Most Beautiful Fruits and Vegetables You’ve Never Seen 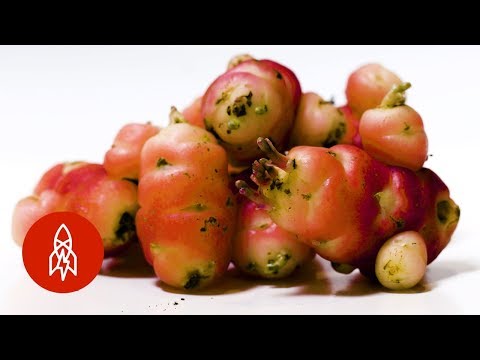 Today is National Mango Day in the US, and fans of the tasty tropical fruit apparently take it quite seriously. In honor, check out this video of the most beautiful and uncommon fruits you may have never seen. (Click here to view.)