Gavin Newsom and Ron DeSantis aren’t just avatars for the different futures of their parties, but also for the separate realities blue and red Americans are living in – two people of opposing viewpoints looking at the exact same set of facts and coming to vastly different conclusions.

In ever-blue California, Newsom, the son of a state appellate judge, has rebooted from his start as a flashy progressive hero around quieter legislative pushes. Meanwhile, in reddening Florida, there’s DeSantis, the son of a Nielsen box salesman, who in public cleaves less to his two Ivy League degrees than to the anti-elitist, reactionary politics that have consumed the GOP.

Newsom now is going on the air against DeSantis in Florida – with what he says is not the first ad of the 2024, or even the 2028, presidential race – with the goal of trying to get Democrats to reclaim a sense of collective identity that could enable them to beat Trumpism in the long term.

With $105,000 on Fox News, Newsom’s new ad, first provided to CNN and set to air on July 4, is a mashup of a classic campaign spot, business investment pitch and one of those California tourism commercials full of celebrities saying how much better it is there, wrapped in the existential terror that’s wracking progressives these days. 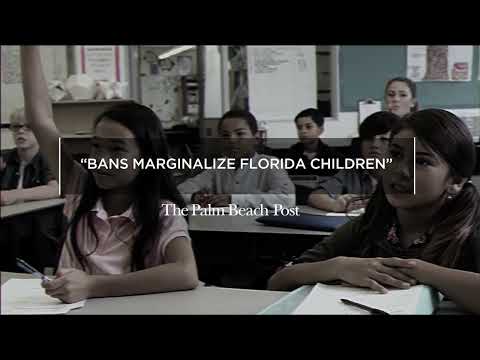 “It’s Independence Day – so let’s talk about what’s going on in America,” Newsom says in the ad, standing in the California sun, tieless, as “America the Beautiful” fingerpicks in the background. “Freedom is under attack in your state.”

Those last words flash across the screen in red, followed by a photo of DeSantis shaking hands with former President Donald Trump, and then another of the Florida governor as Newsom ticks through Florida laws to ban books and restrict voting, speech and access to abortion.

“I urge all of you living in Florida to join the fight – or join us in California, where we still believe in freedom: Freedom of speech, freedom to choose, freedom from hate, and the freedom to love,” Newsom says as the images proceed from an aerial shot of the Santa Monica Pier to a rainbow flag waving in the hands of two women with arms around each other. “Don’t let them take your freedom.”

The ad is paid for by Newsom’s reelection campaign, though this clearly isn’t about racking up potential absentee voters who have retired to the Sunshine State for what’s expected to be an easy win for California governor in November.

“We’re as different,” Newsom said of both the governors and their states, “as daylight and darkness.”

Over the course of a 20-minute phone interview, Newsom called DeSantis a bully, a fraud, an authoritarian, a fake conservative, a betrayer of Ronald Reagan’s legacy and, several times, “DeSantos.”

“Everybody’s got portions of the playbook,” Newsom said, comparing DeSantis to other Republicans. “He’s writing it.”

DeSantis declined a request for an interview, but those around him say he’s happy to have this fight.

“Gavin Newsom might as well light a pile of cash on fire,” DeSantis campaign spokesman Dave Abrams said. “Pass the popcorn for his desperate attempt to win back the California refugees who fled the hellhole he created in his state to come to Florida.”

The enmity between the two governors has been building for months. DeSantis has said California was letting a “coercive biomedical apparatus” guide its closure-heavy Covid-19 approach, and he called San Francisco – a city Newsom once led – a “dumpster fire.” Newsom has said that DeSantis’ approach to the pandemic would have killed an extra 40,000 Californians and that he does “not look for inspiration to that particular governor.”

It’s also a question of style. When Newsom was caught having gone maskless to a birthday party at an exclusive Napa Valley restaurant in November 2020, he sheepishly apologized. When DeSantis was spotted maskless at the Super Bowl months later in February 2021, he sniped, “How the hell am I going to be able to drink a beer with a mask on?” His campaign put the quote on a koozie and sold it online.

DeSantis on the rise

DeSantis’ popularity among Republicans soared during the pandemic, when he bucked medical experts and pushed Florida toward normalcy months before the rest of the country. DeSantis welcomed comparisons between Florida’s laissez-faire approach and California, where leaders implemented mask mandates and lockdowns dictated by public health metrics such as case rates.

Look no further than how each state handled its House of Mouse. Disney World, outside Orlando, reopened in July 2020, just as Florida became the epicenter of the country’s deadly Covid-19 summer. Disneyland, in Anaheim, California, cautiously welcomed back visitors about 10 months later in April 2021.

The stark differences in approach became fodder for both governors.

In a recent sit-down with conservative political commentator Dave Rubin, DeSantis recalled a fundraising trip to California in June 2021 (he’s received more donations from residents of the Golden State than from any other state besides Florida, and most of them $100 or less). He’d made a point of telling staff he wouldn’t abide by any Covid-19 restrictions while in the state and recalled an incident that he said showed how much he was resonating there.

“These two guys in masks come scurrying over to me,” DeSantis said. “I’m like, ‘Oh, God. Here we go.’ One guy gets right in front of me, pulls down his mask, looks me right in the eye and says, ‘I wish you were our governor.’”

If DeSantis versus Newsom ever moves beyond a cross-country shouting match and into a real campaign, Republicans in Florida believe they have the ultimate winning argument: Florida is a growing state and California’s population is on the decline, though there’s a long way to go before the two approach each other; Florida has more than 21 million residents and California has about 40 million.

“We have a working product in Florida,” said Christian Ziegler, vice chairman of the Florida GOP. “The No. 1 way you can measure success of states is economy, job performance and people moving to or moving from states. And the state of Florida is winning that battle. They’re losing people. People are fleeing California. And a heckuva lot of them are coming to Florida.”

But unlike Texas leaders, who revel whenever a Silicon Valley company sets up shop in the Lone Star State, DeSantis lately has urged California CEOs to stay away from Florida for fear a progressive wave of tech workers would offset the GOP sanctuary he is building. When other Republican leaders in Florida publicly courted Elon Musk to move Twitter to the Sunshine State, DeSantis pushed back, saying, “They enjoy our lower taxes, but you know, what are they really providing?”

For the California governor, this goes deeper than a personal grudge match, or political angling as he pushes legislation and lawsuits that spin away from the rightward trend of recent US Supreme Court decisions and further embrace the “California Republic” on the state flag.

DeSantis isn’t Newsom’s only GOP target. The California governor joined Trump’s social media site purely for the sake of trolling the former President and his supporters. He knocked Texas Gov. Greg Abbott repeatedly and tweeted a retort targeting Texas Attorney General Ken Paxton, who signaled last month he would be comfortable defending the state’s defunct anti-sodomy law if the US Supreme Court reverses its 2003 decision to strike down the statute.

“Hell of a thing. Not to mention during pride month,” Newsom wrote. “Hey, corporate America – where are your values? Stand up to these hateful states and come to California.”

Newsom insists he’s not taking digs at President Joe Biden and House Speaker Nancy Pelosi when he says he’s trying to prod his party into getting angrier and more activated. He called the hearings held by the House select committee investigating the January 6, 2021, attack on the US Capitol a “master class” but said Democrats need to be looking past Trump and toward how Trumpism is evolving. After spending much of the pandemic watching and reading right-wing media, Newsom said he’s grown more and more alarmed to see how much is taking root.

The ad, he promised, will be the start of much more to come.

“Things have changed, rules of engagement have to change,” Newsom said. “You’ve got to take the fight to them.”