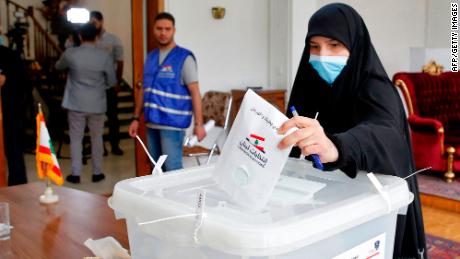 A Lebanese woman casts her ballot at a polling station at the Lebanese embassy in Tehran on May 6, 2022.

Garbage, blasted glass, and the women cleaning up political filth in Lebanon

Carmen Geha is Associate Professor of Public Administration and Leadership at the American University of Beirut, co-founder of the Center for Inclusive Business and Leadership (CIBL) for Women at the Olayan School of Business, and a Maria Zambrano Fellow, Pompeu Fabra University. Geha is the author of "Civil Society and Political Reform in Lebanon and Libya." The views expressed in this commentary are her own. View more opinion on CNN.

(CNN)In 2015, I spent the summer protesting and getting tear-gassed. I wasn't protesting for anything grand. I was one of hundreds of thousands of people who took to the streets to demand an end to the garbage crisis.

We are obsessed with cleaning our homes in Lebanon. I think it is inter-generational, inherited from decades of war and conflict, and exacerbated by the fact that our country is so dirty. We live in one of the most polluted places in the region, with virtually zero public services.
Not that our protests against the government's failure to effectively provide garbage collection changed much -- trash has been piling up ever since. Just this week the United Nations Special Rapporteur on extreme poverty and human rights published a report essentially stating that Lebanon's current misery was avoidable.
Lebanon is in the grip of one of the worst economic collapses of the century and is still reeling from the 2020 Beirut explosion, the world's largest non-nuclear blast. And this man-made disaster we find ourselves in, said the UN report, has "deep roots in a venal political system plagued with conflicts of interest."
The possible overturn of Roe v. Wade should surprise no one. Marginalized women have been sounding the alarm for decades
Now, just hours ahead of Lebanon's parliamentary election on Sunday, voters are expected to cast a ballot amidst misery, threats and corruption. It's the first vote since the financial implosion and civil protests of 2019, and Beirut blast a year later, with newcomers hoping to break the long stranglehold of ruling sectarian politicians.
Read More
On the eve of these elections, there are more women running than ever before — a 37% increase in candidates from 2018. The last time Lebanon went to the polls, women's parliamentary representation also increased — from 3% to 5%.
But though the numbers appear to be headed in the right direction, they don't really tell the full story.
Yes, a record number of women are running — but the proportion to men is dismal. More women are confident enough to run for parliament. But elsewhere, more women are also migrating. More women are unemployed. With Covid-19, domestic violence increased and women suffered, especially migrant domestic workers who feel under captivity protected by the kafala system.
As women, we suffer the most from a century-old patriarchal system. We are segregated from each other because sectarian politics means that 15 different religious courts get to rule over our bodies and lives. Even before the economy crashed, women were a mere 23% of the labor force.

Because women suffer the most it also makes sense that we played a leading role in the 2019 so-called October Revolution that tried to bring about meaningful change.

The protests came as the country stood at a political crossroads. Demonstrators railed against corruption and demanded accountability from politicians who had deprived us of basic services for three decades. We called for the right to be recognized as citizens — not subjects to warlords who kept us captive as women under religious laws.
<div class="zn-body__paragraph" data-paragraph-id="paragr