Bed Bath & Beyond was a retail pioneer. Here's what went wrong
Discovery+ is sticking around. It's a strategy shift for Warner Bros. Discovery
UK competition regulator warns Microsoft's Activision deal could harm millions of gamers
Something isn't loading properly. Please check back later.

Heading into the final month of its season, “Saturday Night Live” took on the biggest story of the week: Politico obtaining a draft of a majority opinion written by Supreme Court Justice Samuel Alito that would overturn Roe v. Wade.

The NBC variety show opened its latest episode by taking viewers all the way back to a castle in 1235 where abortion was discussed.

“We now go to that profound moment of moral clarity, almost a thousand years ago, which laid such a clear foundation for what our laws should be in 2022,” said the show’s announcer in a sarcastic tone.

“While I was cleaning the hole on the side of the castle where we poop and it falls through the sky into a moat of human feces, I started to think about abortion,” Cumberbatch’s character said. “Don’t you think we should make a law against it?”

“You mean, like the law we have against pointy shoes?” Johnson’s character asked.

Cumberbatch’s character noted that the court should make a law that “stands the test of time, so hundreds and hundreds of years from now they’ll look back and say, ‘no need to update this one at all! They nailed it back in 1235!’”

Cumberbatch, Dismukes and Johnson began to debate the topic of abortion and figure out how to put the law together.

“Let’s be careful, the worst thing that could happen is that someone leaks this conversation to the town crier,” Cumberbatch’s character said.

Then Cecily Strong, playing a townswoman, joined the conversation.

“Knock, knock! Just kidding, we don’t have doors,” she said. “Anywho, I was outside watching the sheriff throw left-handed children into the river, and I couldn’t help but overhear you talking about a new law.”

Strong’s character then asked if women should have the right to choose since “having a baby means like a 50% chance of dying.” 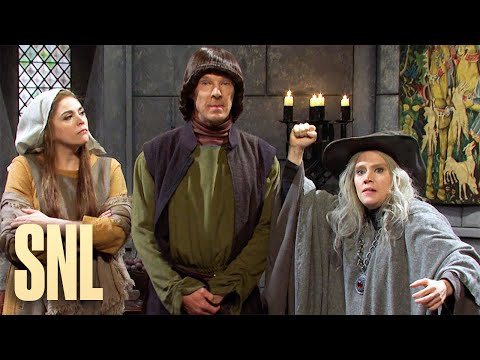 “I just don’t understand why you are so obsessed with this issue,” she added. “Like, what about the fact that no one can read or write, and everyone’s dying of plague?”

Dismukes’ character stopped her there and said, “Oh, you think just because I have active plague that means that I need to wear a mask? It’s my body, my choice.”

“No, no, just a woman in her thirties,” McKinnon’s character responded.

She then explained that she could see the future.

“These barbaric laws will someday be overturned by something called progress,” McKinnon’s character said. “Then about 50 years after the progress, they’ll be like, ‘maybe we should undo the progress.’”

Then all of the characters came together to say the show’s signature catch phrase, “Live… From New York, it’s Saturday night!”

andykazie/iStockphoto/Getty Images
Your Super Bowl party won't break the budget this year, but watch out for beer
Ahmet Akpolat/DIA/AP
Twitter restricted in Turkey, according to network monitoring firm
Ad Feedback