The megarich are getting richer. A new billionaire was minted nearly every day during the pandemic, according to a new report. At the same time, data shows growing levels of inequality and rising food prices could push as many as 263 million people into extreme poverty this year.

On his first trip to Asia since taking office, President Joe Biden said today that the United States would respond militarily if China tries to take Taiwan by force. “That’s the commitment we made,” he told reporters in Tokyo. The President’s statement caught several of his top administration officials off guard, CNN was told by multiple aides. However, this is not the first time Biden has gone further than longstanding US public policy toward the self-governing island. The US provides Taiwan defensive weapons, but has remained intentionally ambiguous on whether it would intervene militarily in the event of a Chinese attack. Following Biden’s remarks, the White House issued a statement that said the US’ official position remained unchanged.

Twitter said yesterday it will sell itself to Elon Musk in a roughly $44 billion deal. The agreement, which was unanimously approved by Twitter’s board, is expected to close later this year pending approval from shareholders and regulators. In a statement yesterday, Musk reiterated his proposed changes for the platform, including his goal to bolster free speech. He said in a tweet yesterday that he hopes “even my worst critics remain on Twitter, because that is what free speech means.” Many people are wondering whether Musk plans to restore former President Donald Trump’s account, which was suspended early last year for violating Twitter policies against inciting violence following the Capitol Riot. Such a move could have significant ramifications for the upcoming 2024 US presidential election.

Tomorrow marks three months since Russia launched its assault on Ukraine. Since then, a staggering 8 million people in the country have been displaced, the UN Refugee Agency said today. Separately, Ukrainian President Volodymyr Zelensky announced a “historic” joint customs control with Poland yesterday, stressing “unity of Ukrainians and Poles is a constant that no one will break.” Zelensky also signed a decree introducing a new award to thank cities of partner countries that have helped Ukraine the most – and the Polish city of Rzeszow became the first to be added to the list. On the ground, tensions remain high and Ukrainian presidential adviser Mykhailo Podolyak said Saturday he has ruled out a ceasefire with Russia, emphasizing Kyiv would not accept any deal with Moscow that involved ceding territory.

A federal judge in Louisiana yesterday temporarily blocked the Biden administration from ending a Trump-era pandemic restriction on the US-Mexico border that allows authorities to turn migrants back to Mexico or their home countries. The public health authority, known as Title 42, was on track to end on May 23, but this latest ruling may throw a wrench in the administration’s plans moving forward. The decision to lift Title 42 has been criticized by Republicans and Democrats alike because border authorities say a massive surge of migrants would follow. More than 20 states had asked the court to block the administration from ending the restriction and last week asked the court to immediately intervene.

Video Ad Feedback
04:07 - Source: CNN
Avlon: Title 42 'is not evidence of open borders, it is just the opposite'

A shipment of 35 tons of baby formula arrived yesterday in Indiana on a US military aircraft from Germany to address the nationwide shortage – but none of it will land on store shelves in the US, a Biden administration official told CNN. The recent batch of formula is a specialized prescription and will be fed to babies intolerant of protein in cow milk, the official said. The shipment will provide enough formula for 9,000 babies and 18,000 toddlers for one week, Agriculture Secretary Tom Vilsack said. As for more upcoming shipments, the White House announced yesterday that additional flights to import formula from abroad will “take place in the coming days.” Biden announced Operation Fly Formula last week. His administration said the total amount of formula in the first round equals up to 1.5 million doses of eight-ounce bottles.

China is battling its biggest Covid-19 wave yet amid widespread lockdowns and increased restrictions. Yesterday, Beijing rolled out mass coronavirus testing for nearly 20 million residents in most of the city as authorities race to contain a fresh Omicron outbreak that has sparked panic buying as citizens fear a mass lockdown is imminent. Since Friday, Beijing has reported a total of 80 cases. Although the caseload is still relatively low, authorities are not taking any chances, especially after seeing how fast the Omicron outbreak in Shanghai spiraled into tens of thousands of new cases. Dozens of residential compounds across eight districts in Beijing are already under strict lockdowns, in which residents are banned from leaving their homes or community grounds.

Video Ad Feedback
03:53 - Source: CNN
This is the video Chinese censors don't want you to see or share

A 32-year-old runner died Saturday after finishing a half marathon in Brooklyn where 15 others were injured, officials said. The marathoner was found unconscious, lying on the pavement, having collapsed after crossing the finish line just before 9 a.m. in Brooklyn’s Brighton Beach neighborhood, an NYPD detective said. An official cause and manner of death have not been released. The runner immediately received attention from on-site medical staff, but was pronounced dead at the hospital approximately 45 minutes later, officials said. Fifteen other individuals were transported to local hospitals from the race and at least four were in serious condition. During the marathon, temperatures ranged from the low 60s to the high 70s Fahrenheit and the relative humidity was between 96% and 97%, according to the National Weather Service.

CNN has obtained 2,319 text messages that former President Donald Trump’s White House chief of staff Mark Meadows sent and received between Election Day 2020 and President Joe Biden’s January 20, 2021 inauguration. The text messages, which Meadows selectively provided to the House committee investigating the Capitol riot, show how Trump’s inner circle, supporters and Republican lawmakers worked behind the scenes to try to overturn the election results. The messages also reveal how Trump’s family members reacted to the violence at the US Capitol during the insurrection. Separately, a New York judge is holding Trump in civil contempt for failing to comply with document subpoenas as part of an investigation into the former President’s company. The judge yesterday said Trump will be fined $10,000 a day until he complies.

The White House is exploring the possibility of tapping into an emergency diesel reserve to ease the spike in gas prices, a senior White House official said. The emergency declaration under consideration would enable President Biden to release diesel from a rarely used stockpile, but the reserve is relatively small and will only serve as a temporary solution to buy time. The national average price for diesel stood at $5.56 a gallon as of yesterday, just shy of the record of $5.58 set last week, according to AAA. Diesel is a vital fuel for the US economy, powering not only farm and construction equipment but the trucks, trains and boats that move goods across the country. Skyrocketing diesel prices often get passed down to consumers.

Props to the festival-goers who stood on their feet for hours baking in the desert sun! They came, they saw, they hydrated.

The internet is undefeated… Trolls pounced on the opportunity to joke about this, well, imaginative design.

Breathe in, breathe out. Check out these tips to make your day a little better.

Add this to the list of electric sports cars we can’t wait to see on the road!

But there’s a catch…

That’s how much was recently lost in a massive cryptocurrency heist affecting the Ronin network. The platform powered Axie Infinity, a popular play-to-earn crypto game which allows paying players to collect digital pets known as “Axies.” It is unclear on whether the hacked holdings were insured. Now, because of the hack, trading off the Ronin platform is currently frozen.

That’s how many tornadoes the Jackson, Mississippi, area has experienced in less than five weeks. It has been an above-average tornado season for much of the Southeast this year, according to meteorologists. So far, the US has had 562 preliminary tornado reports since January. On average, we typically see 426 at this point in the year.

“It will be a game-time decision on whether I compete.”

– Kane Tanaka, the world’s oldest person, shared this message on Twitter earlier this year before passing away on April 19, according to Guinness World Records. Tanaka died in Japan at the age of 119, according to the country’s Ministry of Health, Labor and Welfare. She was born on January 2, 1903, survived cancer twice and lived through a multitude of historical events, including two world wars and the 1918 Spanish flu pandemic – as well as the Covid-19 pandemic.

Which Of These Objects Is Actually A Cake? 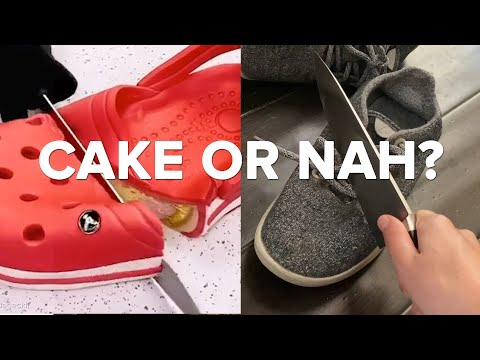 Have fun testing your eyes with this video! Which of these objects is actually a cake? (Click here to view)