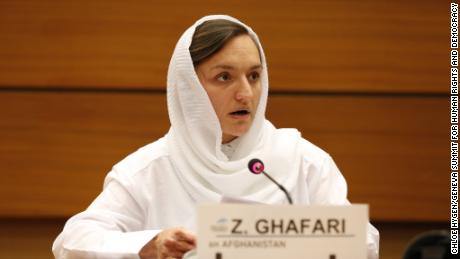 (CNN)"The Taliban cannot erase us, they can't. This is not like the 1990s or before -- they have to accept [women]. They have no other choice," former Afghan politician and women's rights activist Zarifa Ghafari tells CNN defiantly.

In 2018, at the tender age of 24 (though she admits she pretended to be two years older in order to qualify) Ghafari was appointed as one of just a few female mayors in Afghanistan. She then had to fight for months to be allowed to actually take up the position following protests from locals in the conservative city of Maidan Shahr.
Ghafari was finally able to start work in November 2019, almost a year after her appointment, but soon, as she tells CNN, she would endure constant harassment, intimidation and regular protests: crowds of angry men demonstrating outside her office, holding sticks and throwing stones.
She recalls walking into her office and everyone else walking out, as well as occasions when she would arrive at her office to a locked door, having to break the lock just to get in. <