The sun is getting more active – and two solar missions are perfectly poised to capture the stellar show.

The Solar Orbiter spacecraft, a joint mission between NASA and the European Space Agency, is gearing up for its closest approach to the sun so far on March 26.

The journey has been anything but boring.

A large solar flare exploded from the sun on March 2. The eruption was rated as M-class, the fourth strongest type of the five categories measuring solar flare intensity. A burst of this strength can cause brief radio blackouts at the poles and minor radiation storms that might endanger astronauts, according to NASA.

The Extreme Ultraviolet Imager on the Solar Orbiter captured a video of the dramatic event. 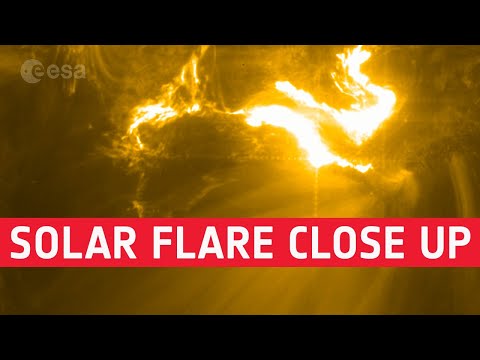 Meanwhile, the Parker Solar Probe, which became the first spacecraft to “touch the sun” at the end of 2021, recently experienced the extremes of a large solar prominence – that’s when the sun released tons of charged particles in Parker’s direction on February 15.

It’s the largest event Parker has experienced during its 3.5 years of flight.

“The shock from the event hit Parker Solar Probe head-on, but the spacecraft was built to withstand activity just like this – to get data in the most extreme conditions,” said Nour Raouafi, project scientist for Parker, in a statement from a release. “And with the Sun getting more and more active, we can’t wait to see the data that Parker Solar Probe gathers as it gets closer and closer.”

If solar flares and storms seem to be occurring more frequently, like the impressive flare on February 15 (also captured by Solar Orbiter) or the solar storm that impacted SpaceX’s Starlink satellites, it’s because the sun is ramping up activity as it heads toward solar maximum.

It’s important to understand the solar cycle because space weather caused by the sun – eruptions like solar flares and coronal mass ejection events – can impact the power grid, satellites, GPS, airlines, rockets and astronauts in space.

The Solar Orbiter spacecraft, operated by NASA and the European Space Agency captured a giant solar eruption on 15 February, 2022. This is the largest solar prominence eruption ever observed in a single image together with the full solar disc.
Solar Orbiter/EUI Team/ESA & NASA

Every 11 years, the sun completes a solar cycle of calm and stormy activity and begins a new one. The current solar cycle, Solar Cycle 25, officially began in December 2019 and the next solar maximum, when the sun is experiencing peak activity, is predicted to occur in July 2025.

Over the course of a solar cycle, the sun transitions from a calm period to one that is very intense and active. This activity is tracked by counting sunspots on the sun and how many are visible over time.

Sunspots, or dark spots on the sun, are the origin point for the explosive flares and ejection events that release light, solar material and energy into space.

Set a course for the sun

The Parker Solar Probe just completed its 11th close approach of the 24 planned during its mission. Parker will eventually come within 4 million miles (6.4 million kilometers) of the sun’s surface in December 2024.

This solar flyby was a special one because, as the spacecraft was sampling the sun’s solar wind and magnetic fields from a distance of 5.3 million miles (8.5 million kilometers), more than 40 observatories around the globe were also watching the sun. These visible, infrared and radio telescopes can provide different data from a greater distance, allowing scientists to develop a broader picture of the sun.

Most of Parker’s data from the flyby will return to Earth between March 30 and May 1, and solar scientists are looking forward to seeing what the spacecraft experienced during the February 15 flare. Parker’s next close pass of the sun will begin on June 1.

ESA's Solar Orbiter is revealing the many faces of the Sun. The Extreme Ultraviolet Imager (EUI) Full Sun Imager (FSI) took the images in the top row and far right column across the week following 30 May 2020, and contributed to the central image. The yellow images, taken at the extreme ultraviolet wavelength of 17 nanometres, show the Sun's outer atmosphere, the corona, which exists at a temperature of around one million degrees. The red images, taken at a slightly longer wavelength of 30 nanometres, show the Sun's transition region, which is an interface between the lower and upper layers of the solar atmosphere. In this region, which is only about 100 km thick, the temperature increases by a factor of up to 100 to reach the one million degrees of the corona. Solar Orbiter will travel around the Sun and out of the ecliptic plane, which loosely defines where the planets orbit. So, EUI will be able to image the far side of the Sun as well as the solar poles. The middle image shows projected, simultaneous solar images from EUI FSI (red) at Solar Orbiter's position during its first perihelion, the closest point in its orbit to the Sun, and the NASA Solar Dynamic Observatory mission (gray) in Earth orbit. The image in the middle of the first column, was taken by the Polarimetric and Helioseismic Imager (PHI) instrument on 18 June 2020. It shows a "magnetic map of the Sun" that reveals the magnetic field strengths on the solar surface. In the bottom right-hand corner there is the beginning of an active region. It can be seen from the closely neighbouring black and white regions, which signify opposite magnetic polarities. In times of increased magnetic activity, plots like this will show many more such active regions. The blue, white and red image at bottom left is a tachogram of the Sun, again taken with PHI. It shows the line of sight velocity of the Sun, with the blue side turning to us and the red side turning away. In times of increased magnetic activity, this plot will become more turbulent. Next to this image, is a view of the Sun in visible light, taken by PHI on 18 June 2020. There are no sunspots because there is very little magnetic activity. Solar Orbiter/EUI Team; PHI Team/ESA & NASA
Solar Orbiter/EUI Team; PHI Team/ESA & NASA

It’s Solar Orbiter’s turn next. On March 14, the spacecraft will pass the orbit of Mercury, the closest planet to the sun, before swinging by the sun at less than one-third the distance between Earth and its star on March 26.

The spacecraft, carrying high-resolution telescopes, will come closer to the sun than it has since launching in February 2020.

“From this point onwards, we are ‘entering the unknown’ as far as Solar Orbiter’s observations of the Sun are concerned,” said Daniel Müller, Solar Orbiter project scientist, in a statement.

Solar Orbiter’s varied suite of 10 instruments will be running simultaneously, ready to measure the solar wind and keep an eye out for mini flares, called campfires, that it spied in the mission’s first images.