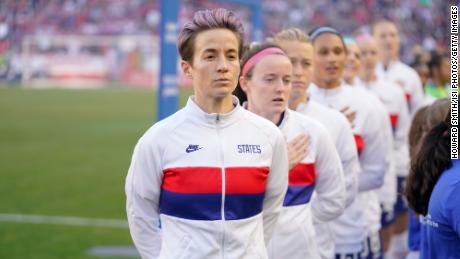 Megan Rapinoe and her team during a game between Spain and USWNT on March 08, 2020 in New Jersey. (Photo by Howard Smith/ISI Photos/Getty Images)

Analysis by Eliza Anyangwe, Editor of CNN As Equals

(CNN)History was made on Tuesday when, in settling an equal pay dispute that dates back to March 2019, US Soccer committed to providing the same pay rates for tournament and exhibition games going forward to its women's and men's teams.

Here's how the story goes: in a lawsuit that listed 28 of the team's players as plaintiffs, the US Women's National Team (USWNT) claimed that they were paid less than the men's team, and that it constituted a form of gender discrimination .. A judge ruled against them in May 2020, and the following year, USWNT filed an appeal.
The fight was acrimonious and public, but the team reached a $24 million settlement on Tuesday with US Soccer. Of this, $22 million is going to the players in the case and another $2 million "into an account to benefit the USWNT players in their post-career goals and charitable efforts related to women's and girls' soccer," with players able to apply for up to $50,000 from this fund, according to a joint statement by US Soccer and USWNT.
The road to pay parity in US soccer has been a long and bumpy one with the statement admitting that "getting to this day has not been easy" and two-time World Cup winner Megan Rapinoe saying of the settlement: "We've been in this for a long time and coming from a long history of women that have fought to put this sport in a better place."
This news is not just of consequence to fans and players of women's soccer in the US. Disparities between what men's and women's teams are paid exist all over the world, with the size of that pay gap dependent on the sport and what conscious action has been taken to equali