A pack of orcas hunting and killing an adult blue whale has been recorded for the first time, scientists say.

The stalking episode took place in March 2019 at Bremer Bay, Western Australia, according to research published in the latest edition of the scientific journal Marine Mammal Science.

Two more separate killings of blue whale calves were captured in the same area in 2019 and 2021.

Even though there have been reports of orcas sporadically attacking blue whales and causing significant injuries, there has been no confirmed kill of an adult or calf until now, the research added.

When scientists spotted the first hunt in March 2019, 12 to 14 orcas were already attacking the adult blue whale, which had a deep wound exposing bone on its rostrum – or snout. Bite marks indicated that the majority of its dorsal fin had also been chewed off. 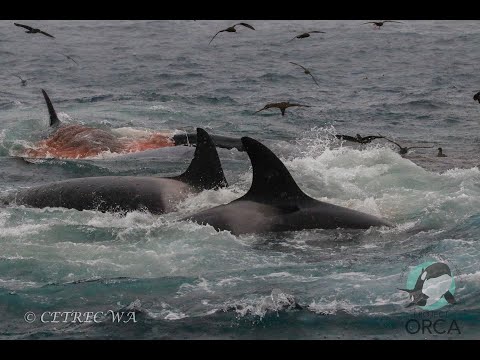 The orcas – referred to in the study as “killer whales” – continued to attack their prey for 20 minutes, while the adult blue whale was “slapping and swiping its tail,” as a defense mechanism, the research said.

The pack killed the whale within an hour of being spotted. More orcas proceeded to join the pack as they fed off the carcass, making the total headcount about 50. They tore off pieces of flesh and dispersed into feeding groups, with almost 30 orcas still feeding when the crew left the scene.

In the second predation, which took place 16 days later, the blue whale calf appeared to be dead after the crew had been observing the attack for 15 minutes. Scientists identified 26 whales that also participated in the third hunting episode.

The final hunting episode lasted for nearly three hours, and the number of orcas present ranged from about 50 to 75.

At least 16 of the same orcas took part in all three attacks.

Adult female killers could be more likely to start attacks because they have young to feed, and therefore require sustenance more often than adult males.

“These guys are ferocious with a preference for squid, fish and beaked whales. In recent years recordings of the number of beaked whales taken have increased, in this region they are known to also predate on humpback and minke,” John Totterdell, a researcher at the Cetacean Research Centre who was involved in the research, said.

“It’s suggested that killer whale predation has impeded gray whale population recovery in the Northwest pacific, yet in Australia, with many whale species known to be targeted by killer whales, the impact of their predation on these populations remains unknown.

“This study, combined with our recent research, highlights the need for increased understanding of killer whale population ecology so we can better determine their impact on the marine ecosystem in Australian waters.”

Orcas are the biggest member of the dolphin family, but were dubbed “killer whales” by ancient sailors who noticed groups of orcas preying on larger whale species, according to Whale and Dolphin Conservation, a non-profit organization.

Blue whales are the largest animals on Earth, and can weigh up to 33 tons – that’s about 33 elephants, according to the World Wildlife Fund. An endangered species, the main threats to their survival include the climate crisis and habitat loss, and becoming tangled in fishing gear.