Betty White, the self-described “lucky old broad” whose sweetly sarcastic senior citizen characters were a beloved fixture on TV shows and movies such as “The Golden Girls,” “Boston Legal” and “Hot in Cleveland,” died Friday, her agent and close friend Jeff Witjas told People magazine in a statement.

“Even though Betty was about to be 100, I thought she would live forever,” Witjas said. “I will miss her terribly and so will the animal world that she loved so much. I don’t think Betty ever feared passing because she always wanted to be with her most beloved husband Allen Ludden. She believed she would be with him again.”

For the first half of her career – eventually honored by Guinness World Records as the longest television career by a female entertainer – White was a regular, but not widely noticed, presence on radio and television.

There were ’50s sitcoms, a 1954 talk show and even a role in the 1962 film “Advise and Consent.” She’d pop up on game shows occasionally, particularly “Password,” hosted by her third husband, Allen Ludden.

“It was a little out of character, a little unfeminine, to be … you shouldn’t be funny,” White recalled in a 2017 interview with CNN, reminiscing about her early days in Hollywood. Noting that women at the time were expected to simply “come in and be pretty,” White countered: “No, it’s so much more fun to get that laugh.”

But starting with her performance as acerbic kitchen diva Sue Ann Nivens on the 1970s sitcom “The Mary Tyler Moore Show” – beginning when she was 51 – White developed a knack for portraying the apparently pure-hearted elder, full of Midwestern sincerity, who had a randy inner life. In doing so, she created a new generation of fans, a base that only grew larger as she entered her 90s.

She was the sexually experienced, if otherwise naïve, Rose Nylund on “The Golden Girls.”

White also played a flinty and sometimes violent secretary on “Boston Legal.” She had a guest spot on “The Simpsons,” hosted “Saturday Night Live” – the oldest person ever to do so – and even appeared in a self-mocking ad for Snickers candy bars.

Through it all, she took her success – if not her work – lightly.

“I’m having the time of my life, and the fact that I’m still working – how lucky can you get?” she told the Huffington Post in 2012.

Betty White was meant to be on television.

When she was just 17, in 1939, she was on an experimental TV broadcast. The technology was still in its infancy, having made its public debut at the 1939 New York World’s Fair.

“I danced on an experimental TV show, the first on the West Coast, in downtown Los Angeles,” she told Guinness World Records. “I wore my high school graduation dress, and our Beverly Hills High student body president, Harry Bennett, and I danced the ‘Merry Widow Waltz.’ ”

White was a native of the Midwest, born in Oak Park, Illinois, on January 17, 1922. (Her name was officially Betty, not Elizabeth.) Her mother was a homemaker, and her father was an executive for an electrical company.

When she was 2, her family moved to the Los Angeles area, where her father started manufacturing radios. During the Depression, business got so tight at, at one point, he traded them for dogs, hoping that would turn into a business. White remembered her family having about 20 dogs at one point. She became a lifelong animal lover.

White attended Beverly Hills High School and, at one point, wrote a play in which she cast herself as the lead. “I guess that’s when the bug bit,” she told the Archive of American Television.

White became a model after the TV appearance, though her career was interrupted by World War II, in which she served in the American Women’s Voluntary Services.

After the war, she worked in theater and eventually started picking up radio roles on shows such as “The Great Gildersleeve” and “Blondie.” In 1949, a Los Angeles radio host, Al Jarvis, asked her to be his “girl Friday” for a 5 1/2-hour live TV show that was intended to be his radio show on television but quickly turned into a loose variety-talk show, “Hollywood on Television.”

“It was like going to television college,” she recalled. After a little more than two years, White became the sole host.

She segued into other programs: a syndicated show, “Life with Elizabeth”; an NBC sitcom, “Date with the Angels”; the first of four programs named “The Betty White Show”; hosting parades – “it got so that, if a signal would go red and six cars would line up, I’d announce them,” she said; and a variety of commercials and appearances. White even had her own production company, a rarity for a woman at the time.

She also did game shows, which eventually led to meeting Ludden, her third husband.

Ludden was the host of “Password,” and White was a panelist in the show’s third week in 1961. Later, the two worked together in summer stock and got to be good friends. Ludden, a widower, became an ardent pursuer and actually bought White – a two-time divorcee reluctant to marry again – a wedding ring, courting her in Los Angeles through transcontinental trips from his home in New York.

She finally accepted a year later when he bought her earrings and a stuffed bunny for Easter, the latter an appeal to her love of animals.

“I came to the point of regretting that year that I wasted saying ‘no.’ I would have given anything to have it back,” she said of her love affair with Ludden.

They were married for 18 years until Ludden’s death of cancer in 1981. White never remarried.

For much of the ’60s and into the ‘70s, White worked steadily but quietly, with frequent talk show and game show appearances and the occasional guest slot. (At one point, she was asked to become part of the “Today Show” team.) In the early ‘70s, she hosted the syndicated “The Pet Set,” which featured celebrities and their animals.

American actress Mary Tyler Moore (as Mary Richards) (left) gives a 'thumbs up' sign as she sits at her desk with Betty White (as Sue Ann Nivens) in a scene from 'The Mary Tyler Moore Show' in 1975.
CBS Photo Archive/Getty Images

White and Ludden had many friends, including Mary Tyler Moore and her producer husband, Grant Tinker. At the urging of “MTM” casting director Ethel Winant, White was cast as Sue Ann Nivens, the “Happy Homemaker,” sweetness and light while doing her cooking show but a man-hungry harridan off-camera.

Originally meant to be a one-off – Nivens was having an affair with the husband of another character – by the time the episode ended, the chemistry was so strong that White became a regular.

She won two Emmys for the role.

White loved working with the cast but observed that “the magic of the show was the writing. … It was a magnificent combination.”

White hit paydirt again a decade later when she was cast as Rose on “The Golden Girls,” the 1985-92 show about four senior women sharing a Miami house.

The script was “dynamite,” White recalled. She was originally slotted for the role Blanche, the lascivious widow played by Rue McClanahan, but director Jay Sandrich – who’d worked with White on “MTM” – didn’t want her to repeat herself and suggested Rose.

The cast hit it off beautifully, White recalled.

“It’s like four points on a compass,” she recalled. “That’s why we fit together so well.”

The show won a slew of Emmys over its seven-season run, including one for White.

White was never really out of the public eye. After “The Golden Girls” went off the air, she still worked, whether as a spokeswoman for animal welfare – she was a trustee of the Morris Animal Foundation for more than 40 years – or as a guest star on various TV shows.

But even she wasn’t prepared for the resurgence in popularity that accompanied her appearance in the 2009 film “The Proposal,” in which she played Ryan Reynolds’ grandmother.

After receiving a long ovation, she gave as good as she got.

“Isn’t it heartening to see how far a girl as plain as she is can go?” she said of Bullock.

Later, she added, “I am still, to this day, starstruck. I look out at this audience, and I see so many famous faces. But what really boggles my mind is, I actually know many of you, and I’ve worked with quite a few. Maybe,” she added, “had a couple. And you know who you are.”

And then she got serious.

“This is the highest point of my professional life,” she said. “Thank you from the bottom of my heart.” 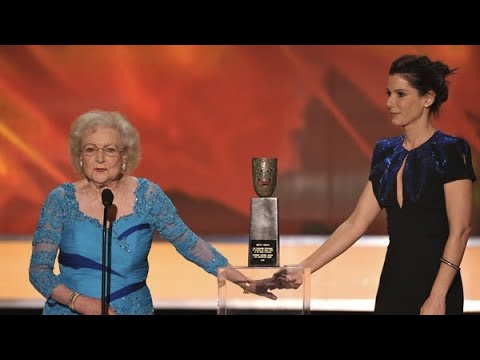 But it never stopped for Betty White. There was the Snickers commercial. The “SNL” appearance. Another series, “Hot in Cleveland,” and appearances on “Community,” “Save Me” (as God) and even “WWF Raw.” She had a Twitter account with more than a million followers.

She never took any of it for granted, remaining the same down-to-earth, slightly impish, engaging woman the public first saw many decades before.