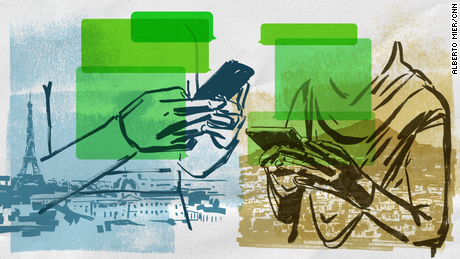 As the Taliban swept Kabul, one friend escaped. The other was trapped. They shared their anguish on WhatsApp

In the four months since the Taliban took over Afghanistan, Nilofar, a 20-year-old university student, has rarely left her small apartment in Kabul, where she lives with her older sister, brother and father.
Her days, which were once punctuated by exam preparation, fitness classes at the gym, meeting friends for coffee at cafes and shopping for new clothes, are now painfully empty.
She was planning to start an economics degree at Kabul University this fall. Instead, she's stayed at home, too terrified to venture further than the neighborhood grocery store. Confined to four walls, she tries to keep herself busy. She rearranges her furniture frequently, studies English textbooks, posts poetry on Instagram and practices new makeup tricks she finds on YouTube.
"We still try to stay alive and occupy ourselves so that we don't feel the pain and hurt," Nilofar told CNN in a recent phone call. "We don't even know what's going on outside. We simply watch the sun rise and set outside the window."
Young Afghan women like Nilofar, who grew up in the shadow of the US invasion that toppled the Taliban in 2001, have lived in an increasingly open society -- one defined by cellphones, social media, reality television, pop music and the right to express themselves freely. They've endured war, persistent poverty and the threat of suicide bombings. But they came of age with an increasing sense they could break free of the patriarchal society of the past and decide their own future.
Read More
"I had many dreams, I wanted to continue my education, to do big things, to work alongside my friends, but all my friends left the country. I don't know if Afghanistan can return to its previous state," Nilofar said, adding that she has received a UN scholarship to attend university in Kazakhstan, but is still waiting on her visa to be approved. She says she is determined to follow friends who fled in a frenzy of evacuation flights during the withdrawal of US and NATO troops, and as Taliban militants swept into the capital on August 15.
Nilofar's best friend, Florance, was among them. The 23-year-old Kabul University graduate is now living in temporary housing in a Paris suburb, where she is trying to learn French and planning to apply for her master's degree in business. She says that she was heartbroken to leave Afghanistan, but felt there was no future for her there.
"I left my motherland, my home, my mother, my sister, my brothers, my beloved little nephews, my memories, my friends, with tears," she said. The last time she saw Nilofar was two weeks before the Taliban takeover, during an English language course that they'd taken together for four years with the hope of traveling abroad.
"We were just like sisters. We did everything together," Florance said. "We had lots of fun, but now I miss all of those things."
WhatsApp messages between Nilofar and Floran