Editor’s Note: This story was originally published in December 2020. It has been updated.

It’s George Bailey’s crucial moment. Disheveled and desperate, he offers up a Hail-Mary prayer to a God he’s not sure is listening: “I’m not a praying man, but if you’re up there and you can hear me, show me the way. I’m at the end of my rope.”

Actor Jimmy Stewarts’ emotion is palpable in this scene, one that acclaimed actress Carol Burnett called one of the finest pieces of acting ever on the screen. What may have escaped audiences watching “It’s a Wonderful Life” over 70 years after its making, is that the tears running down Stewart’s face are real, the actor later shared.

Stewart had just returned home from serving as a flight leader in World War II and this 1946 film was his first movie since witnessing the horrors of war. With this postwar mentality, Stewart and director Frank Capra take a film titled “It’s a Wonderful Life” and antithetically crescendo into a failed suicide attempt.

Throughout the film, George Bailey’s life often seems anything but wonderful. The audience watches as a young man with worldly dreams encounters setback after setback, each one like a nail in his own coffin. Trapped in his hometown, running his late father’s business, the story comes to a climax when George Bailey believes he’s worth more dead than alive.

“It’s a Wonderful Life” addresses real and resonant issues of self-worth and failure. Fresh from the war, Stewart is grappling with these trials himself, as he shapes the deeply relatable character of George Bailey. Without Stewart’s real acquaintance with darkness, the holiday classic’s redefining perspective on life wouldn’t be able to shine so unforgettably bright.

When it was first released, “It’s a Wonderful Life” was not intended to be a Christmas movie. It initially flopped at the box office and the film’s copyright was not renewed, according to Turner Classic Movies.

This meant that in the 1970’s “It’s a Wonderful Life” was cost-free for broadcasters to air repeatedly. Audiences began to take notice of this less-than-jolly movie that flooded the airways at Christmas time, and thus a holiday tradition was born.

NBC, which now owns the rights to the film, broadcasts “It’s a Wonderful Life” on Christmas Eve every year. In 2016, Variety reported that the network’s 42nd Christmas Eve airing of the program brought in 4.5 million viewers.

The movie captures a period of American life packed with some of the most landmark historical events in the 20th century, including the Great Depression and World War II.

After serving in the Army Air Corps, Stewart had been absent from Hollywood for five years when he was offered the role in “It’s a Wonderful Life.” He was initially hesitant to do the film, according to biographer Robert Matzen, but it was his only offer except for a film featuring his war service.

“‘It’s a Wonderful Life’ was a result of Jim’s war experiences because it unlocked this depth of soul in Jimmy … He had to learn to act again and that’s what you’re seeing on screen. It’s like lightning that just got captured in a bottle,” biographer Robert Matzen told CNN.

This is seen in one of the film’s most iconic, unscripted scenes, when George Bailey finds himself at the end of his rope: “I’m not a praying man but if you’re up there and you can hear me, show me the way.”

George Bailey wasn’t scripted to cry, but Jimmy Stewart did.

“As I said those words, I felt the loneliness, the hopelessness of people who had nowhere to turn, and my eyes filled with tears. I broke down sobbing,” Stewart said in an interview in 1987.

Its a Wonderful Life - Praying to God 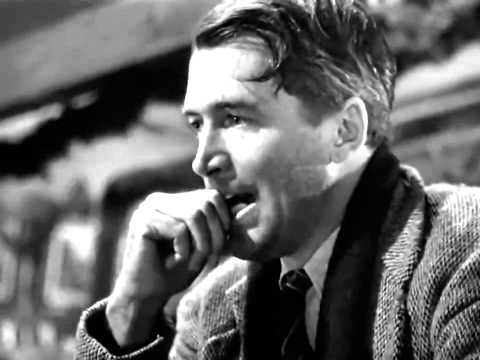 This scene, capturing George Bailey’s desperate plea for help, was done in one take. This was due in part to how emotional it was for Stewart, who was still grappling with the life or death pressure of war, Turner Classic Movies host Ben Mankiewicz explained.

“Jimmy Stewart was following his own experience and using that in his character. That is a very hard thing to do. The audience feels the intensity of that because it was clearly authentic,” Mankiewicz told CNN.

“It’s a Wonderful Life” has become a classic because it connects with the viewer emotionally, Mankiewicz said, and is able to resonate with our everyday lives.

“It’s a movie we watch at Christmas, but the power and emotion the film conveys isn’t any less powerful in June,” Mankiewicz said.

When Stewart enlisted in the Army in 1941, he had just won an Academy Award for “The Philadelphia Story.”

Entering the Army Air Corps as a private, he was assigned to the motion pictures unit to make films for the war department. Stewart, who comes from a family steeped in military service, fought the orders and pushed for the chance to serve overseas.

Stewart in the early 1940s with his Air Force cap in front of a military plane.
Hulton Archive/Archive Photos/Getty Images

After earning his wings as a pilot, Stewart was finally sent to England as a flight leader in 1943. Matzen described Stewart as an “aerial quarterback,” responsible for calling real-time shots in the air for pilots.

Stewart flew 20 physically and mentally challenging combat missions which he rarely talked about after the war.

Through mission reports of Stewart’s combat, Matzen was able to provide a look into the worst mission Stewart led in 1944 over the German city of Gotha. Stewart lost men in his command during this bombing campaign, a devastating cost for a leader who believed he was responsible for each life.

Adding to this, the personal experience Stewart experienced over Gotha was something out of a nightmare. The floor of Stewart’s plane was hit, blowing a hole right below his feet, Matzen explained. His damaged bomber had to limp back to England while Stewart gazed down at enemy territory through the hole in his cabin. Matzen estimated Stewart experienced temperatures of at least 20 degrees below zero.

This mission was “one too many” for Stewart, Matzen said. Ten years over the recommended age for a pilot flying heavy bombers, experiences like this took a tremendous toll on Stewart in his mid-30’s.

“Nobody recognized the Jimmy Stewart that returned home from combat. He had changed so much. He had aged some say ten years, some say 20. He had a lot of the attributes of PTSD,” Matzen said.

These symptoms included the shakes, a short temper and nightmares, according to Matzen. The short temper would lead to mood swings, not unlike the explosive fit where George Bailey destroys part of the family living room, said Matzen.

At the time, veterans returning from war were considered to be experiencing “shell-shock” or “combat fatigue.” Post-Traumatic Stress Disorder was not added as a psychological diagnosis until the 1980’s after the Vietnam War.

When asked what the horrors of war meant to Stewart, Matzen said that Stewart’s perfectionism plagued him: every life he lost under his command was a job he could’ve done better.

The challenge of overcoming his perceived failure and rediscovering his self-worth as a civilian is where the audience meets postwar Stewart on screen in 1946.

Watching during a pandemic

For two hours, “It’s a Wonderful Life” continues down a dark arch, until there are less than 10 glorious minutes left in the film. A guardian angel and an alternative universe later, George Bailey learns the lesson that makes the movie worth watching: an ordinary life serving others will leave an extraordinary impact on people’s lives. 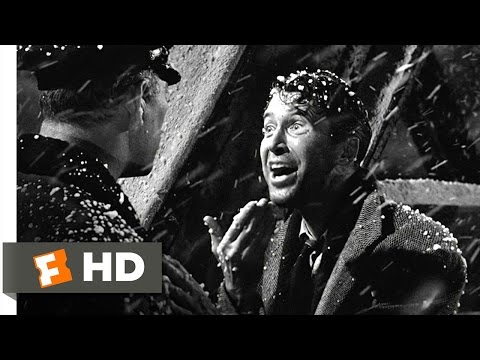 It’s with a new perspective that every little thing that George Bailey has resented about his life, he now rejoices in.

A new perspective on life is no foreign concept in 2020, a year unlike any other in recent history. The coronavirus pandemic has taken over 1.6 million lives worldwide and disrupted everyday life, forcing communities into lockdowns and hurting local economies.

“Right now, a lot of us are like George Bailey in a sense because he’s trapped in Bedford Falls and he feels like he’s a failure as a result of that. Right now, being in this state of lockdown since March, I’ve reevaluated what it means to be successful in my life,” film historian Carla Valderrama told CNN.

Valderrama says “It’s a Wonderful Life” is one of the greatest movies ever made because it can change the way one views the world. What this film tells the viewer is that success is not measured in materialism, but how much one gives back.

CNN’s Amy Wray and Fernando Alfonso contributed to this report.