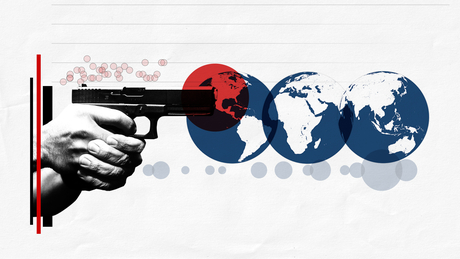 How US gun culture stacks up with the world

Ubiquitous gun violence in the United States has left few places unscathed over the decades. Still, many Americans hold their right to bear arms, enshrined in the US Constitution, as sacrosanct. But critics of the Second Amendment say that right threatens another: The right to life.
America's relationship to gun ownership is unique, and its gun culture is a global outlier.
As the tally of gun-related deaths continue to grow daily, here's a look at how gun culture in the US compares to the rest of the world.
There are 120 guns for every 100 Americans, according to the Switzerland-based Small Arms Survey (SAS). No other nation has more civilian guns than people.
Read More
The Falkland Islands -- a British territory in the southwest Atlantic Ocean, claimed by Argentina and the subject of a 1982 war -- is home to the world's second-largest stash of civilian guns per capita. But with an estimated 62 guns per 100 people, its gun ownership rate is almost half that of the US. Yemen -- a country in the throes of a seven-year conflict -- has the third-highest gun ownership rate at 53 guns per 100 people.
While the exact number of civilian-owned firearms is difficult to calculate due to a variety of factors -- including unregistered weapons, the illegal trade and global conflict -- SAS researchers estimate that Americans own 393 million of the 857 million civilian guns available, which is around 46% of the world's civilian gun cache.
About 44% of US adults live in a household with a gun, and about one-third own one personally, according to an October 2020 Gallup survey.
Some nations have high gun ownership due to illegal stocks from past conflicts or lax restrictions on ownership, but the US is one of only three countries in the world where bearing (or keeping) arms is a constitutional right, according to Zachary Elkins, associate professor of government at the University of Texas at Austin and director of the Comparative Constitutions Project. Yet the ownership rate in the other two -- Guatemala and Mexico -- is almost a tenth of the United States.
The gun debate in those countries is less politicized, Elkins said. In contrast to the US, Guatemala and Mexico's constitutions facilitate regulation, with lawmakers more comfortable restricting guns, especially given concerns around organized crime, he said. In Mexico, there's only one gun store in the entire country -- and it's controlled by the army.
In the US, firearm manufacturing is on the rise, with more Americans buying guns.
In 2018, gun makers produced 9 million firearms in the country -- more than double the amount manufactured in 2008, according to the US Bureau of Alcohol, Tobacco, Firearms and Explosives (ATF). More recently, January 2021 marked the biggest annual increase since 2013 in requests for federal background checks necessary for purchasing a gun -- a nearly 60% jump from January 2020.
And in March 2021, the FBI reported almost 4.7 million background checks -- the most of any month since the agency started keeping track more than 20 years ago. Two million of those checks were for new gun purchases, making it the second highest month on record for firearms sales, according to the National Shooting Sports Federation, the firearms industry trade group that compares FBI background check numbers with actual sales data to determine its sales figures.