Steve Bannon, one-time adviser to former President Trump, turned himself in to the FBI and appeared in federal court yesterday. Bannon was indicted last week following his refusal to answer subpoenas from the House committee investigating the January 6 Capitol riot. He will not be detained before his trial on contempt of Congress charges. Bannon was defiant during yesterday’s events, telling reporters outside an FBI field office, “We’re taking down the Biden regime.” Bannon’s antics could be the precursor of a long legal fight that could bog down the House committee’s investigation. Today, the committee is expected to consider what to do about similar defiance from Trump’s former White House Chief of Staff Mark Meadows.

Video Ad Feedback
02:40 - Source: CNN
Bannon on Garland: This is going to be a misdemeanor from hell

“Respectful and straightforward.” A “healthy debate.” That’s how officials described the virtual summit between President Biden and Chinese President Xi Jinping. The countries have clashed recently over trade policies, military might and human rights issues, and the meeting yesterday was intended to ensure, as Biden said, that competition between the two “does not veer into conflict.” Biden reportedly raised concerns about human rights abuses against the Uyghur people in China, reaffirmed the need for transparency in handling the Covid-19 pandemic and asked about ways the US could cooperate with China on climate issues. Through it all, the US and China remain economically codependent. In fact, before the summit, two dozen businesses called on Biden to ease tariffs on China, saying it would reduce record inflation at home.

The US intelligence community is struggling with an intelligence blind spot as it continues to monitor irregular Russian military movements near the border with Ukraine. US officials have said publicly that they don’t yet know what Russia’s intentions are, and there is concern the country is looking to repeat in some way the 2014 invasion of its western neighbor. The US has long struggled to penetrate the Kremlin or get strong intelligence around Russian President Vladimir Putin and his inner circle. Regarding the country’s current movements, US Secretary of State Antony Blinken said the US remains committed to Ukraine’s sovereignty and independence. NATO’s secretary-general warned Moscow against “potential aggressive actions” regarding the proliferation of Russian troops, which has deepened concerns over the potential for a wider geopolitical crisis.

Video Ad Feedback
06:10 - Source: CNN
On GPS: Is Russia on the brink of another invasion?

The Biden administration is withdrawing a Trump-era policy that limited the FDA’s review process of certain lab tests, including some Covid-19 tests. Under the policy, the agency did not require premarket reviews of laboratory-developed tests, even in situations in which they had poor performance. The rollback of this policy is intended to increase public access to more reliable tests, which experts say are still a cornerstone of pandemic protection. Meanwhile, India has opened its borders to fully vaccinated foreign tourists on commercial flights for the first time in nearly two years. Depending on their country of origin, travelers may have to submit to Covid-19 tests upon arrival. India has been one of the hardest-hit nations in the pandemic and endured a devastating second wave this spring.

Taliban forces held a military parade in Kabul using dozens of captured American-made armored vehicles and Russian helicopters in a show of strength as the group continues to build a standing army after gaining control of Afghanistan. Most of the weapons and equipment Taliban forces now use were supplied by the US to the Western-backed government in Kabul with the intention of bolstering the fight against the insurgents. Some $28 billion worth of defense articles and services were transferred from the US to the Afghan government from 2002 to 2017. US troops destroyed some vehicles and other equipment as they departed during the chaotic withdrawal from Afghanistan earlier this year, but a significant amount of equipment was abandoned and left vulnerable to Taliban use.

Four couples live to dance another day. Next stop: the finals!

In case you weren’t done being emotionally victimized by all of Ms. Swift’s artistic antics recently.

Chick-fil-A will be closed Christmas weekend

Mark your calendars so no one gets ho-ho-hangry.

Clean fingers never had a chance.

‘Megaspider’ is biggest of its kind we’ve ever seen, Australian reptile park says

Two explosions have rocked the Ugandan capital’s city center, with three people killed and 33 injured. One blast went off near the Central Police Station and another near Parliament. The cause of the explosions was not immediately clear, and no group has claimed responsibility.

Jury deliberations are set to begin today in the trial of Kyle Rittenhouse. The 18-year-old is charged with five felonies after he shot and killed two people and wounded another during unrest last summer in Kenosha, Wisconsin.

That’s the anticipated unemployment rate by the end of next year, as predicted by Goldman Sachs. If the estimation is correct, it would match the 50-year low hit in late 2019 and repeated in early 2020.

Lagos Gov. Babajide Sanwo-Olu, after a government-appointed panel concluded the lethal display of force conducted by Nigerian military during last year’s notorious Lekki toll gate shooting in Lagos could be considered a “massacre.”

Days of severe wind and rain has led to extensive flooding in parts of Washington state, shuttering a stretch of Interstate 5, knocking out power and displacing hundreds.

Will the wild kookaburras let me pet them? We test it with 5 different kookaburras! 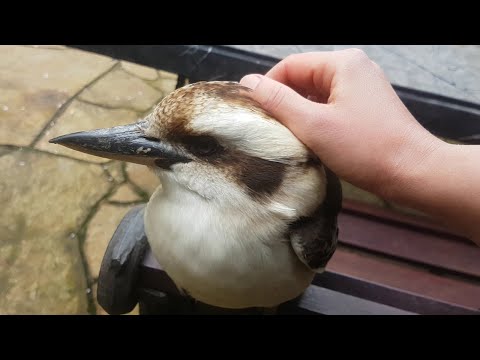 Start your day like a kookaburra … with a little conversation and a little head pat. (Click here to view.)

Correction: An earlier version of this newsletter misidentified who died in blasts in Uganda’s capital. One police officer and two civilians were killed, police said.