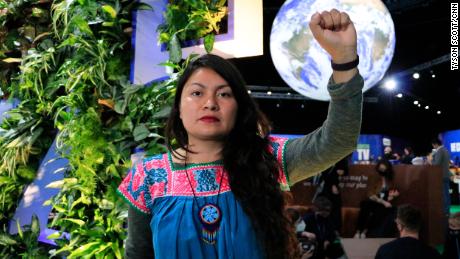 Miryam Vargas Teutle, a Nahua woman from the Cholulteca region of Mexico, said she came to COP26 to raise awareness about the suffering of her people.

'We're not just somebody to look at.' Sidelined groups complain of racial tokenism at COP26 climate talks

Glasgow, Scotland (CNN)There's a small desk right at the back of the largest room at the COP26 conference in Glasgow. It sits well behind the rows of seats reserved for world leaders and international organizations, right underneath a huge EXIT sign, behind observing journalists.

The label on the desk reads "Indigenous Peoples Organizations."
The United Nations Conference of the Parties, or COP, is supposed to be an inclusive forum on climate, bringing together global leaders, NGOs, activists and civil society groups. The UK, which is hosting the summit in Scotland, promised "the most inclusive COP ever."
But to some of the Indigenous people and members of other underrepresented groups that are attending, those claims ring hollow.
CNN spoke to more than a dozen people from underrepresented groups from different parts of the world, including Indigenous people and those from the Global South, and they all said the same thing: The conference doesn't reflect the real world and doesn't feel inclusive.
Read More

'We're working in a colonial framework'

Ruth Łchavaya K'isen Miller is part of the Native Movement delegation at COP26 summit in Glasgow.
Ruth Łchavaya K'isen Miller, a Dena'ina Athabaskan and Ashkenazi Russian Jewish woman who is part of the Native Movement delegation, said the UK's pledge of inclusiveness is "quite hypocritical and simply a lie."
"It feels really deeply and profoundly lonely," she told CNN.
She said a lot of people from civil society groups, particularly from the Global South, had struggled to get to the conference because of the difficulties brought by the pandemic, but she also complained that participating virtually was limiting. A lot of virtual sessions mean people can watch, but they can't raise their hand and get involved, or ask questions.
'Nature is not a commodity': Can the world learn from indigenous peoples' food systems, before they are lost?
"We see low numbers of participation from civil society, members of the Global South, particularly from Indigenous communities," she said.
People who have been unable to get to COP26 can participate in some sessions online. But Miller said that in many cases, the sessions did not facilitate those attending virtually to actually ask questions or join in on the discussions.
The way Miller sees it, conferences like COP26 perpetuate structures of power that run along racial lines. Indigenous people's struggles to attend COP26 are not the result of anyone deliberately trying to exclude them, but are an example of everyday struggles these groups face in access to decision-making generally, according to Miller.
"COP ... has not done enough to break down those barriers to entry," Miller said.
She even described the way some of the sessions were held as "racist."
"We're working in a colonial framework to solve a problem caused by colonization ... the ways that these meetings are held, they rely on fluency in English, they rely on the ability to navigate on an iPhone, they rely on the ability to sleep three hours every night and to run around oftentimes without any accessibility accommodations, to be on call at any moment," she said.
Stay informed on the climate
While the COP26 climate negotiations bring together leaders and delegates from all over the world, the concentration of global power and wealth is still largely dominated by the West, and the leaders of those countries are still predominantly White.
As wrangling over financing continues -- specifically over how much the developed world is willing to pay the developing world to adapt to the climate crisis -- that concentration of power has been stark.
The priorities for COP26 hinged heavily on the G20 summit in Rome that came just before it, a forum that includes plenty of big developing economies but only one African and three Latin American nations.
Of the more than 2,000 NGOs and other organizations that received observer status with the UN climate body as of 2017 -- which allows them to sit in on negotiations -- two-thirds were from Western Europe. That's not to suggest people from the Global South or Indigenous groups are being left out, but it shows, at the very least, that resources in climate are heavily concentrated in the West, even in civil society.
Grassroot campaigns, including Extinction Rebellion, have also been criticized for their lack of diversity. Extinction Rebellion says on its website it is "working to improve diversity in our movement." A 2018 study by Yale University's Dorceta E. Taylor found that 85% of staffers at 2,057 American environmental non-profits were White.
Too white, too middle class and lacking in empathy, Extinction Rebellion has a race problem, critics say
Some of the activists and members of NGOs that have observer status at the COP26 conference say they have been unable to gain access to negotiations, some of them several times across the first week, mostly because rooms with social-distancing measures in place are reaching capacity quickly.
Josh Kioke, Climate Policy Analyst at the Union of BC Indian Chiefs, told CNN that a representative of the group was asked to leave a negotiation on Friday on loss and damages -- despite arranging to be on the speaker's list as an observer.
"Several parties arrived late and all observers were asked to leave once the room reached capacity [because of] Covid," he said.
A representative of the Indigenous Peoples' Caucus told CNN they were asked to leave negotiations on carbon markets on Tuesday, an issue that directly impacts indigenous lands, as the room had reached capacity.
Similar experiences are being shared on social media. Climate activist Alexandria Villaseñor said that at the COP25 in Madrid in 2019, she was able to freely observe negotiations "which is what being a 'NGO Observer' is all about," she tweeted.
"Here, at COP26, I haven't been able to observe at all. I feel lost, like I'm here as an ornament or to tell reporters what gives me hope over and over and over."
The UNFCCC did not respond to CNN's repeated requests for comment, but UN Climate Change Executive Secretary Patricia Espinosa has acknowledged several times that access has been a problem.
"In our process, we have packed rooms, some people even sitting on the floor and this is something that we cannot have here," she told reporters last week.
Alok Sharma, the British MP chairing the talks, has repeatedly apologized throughout the conference for the access issues.
"I hope everyone appreciates that we are holding this COP in quite challenging circumstances. During this year, there have been various calls for this COP to be postponed once again. I have always been very clear that we must proceed," Sharma said.
"In terms of access to the rooms, clearly, we've had to restrict numbers in groups and people appreciate the reason for that is the requirement for social distancing, ensuring that everyone is kept safe. I get this point about the NGOs and observer groups wanting access. I think we have tried to accommodate that," he said.
<div class="zn-body__para