A dolphin's decades-long stay made this Irish town famous. A year after he left for good, Dingle bids farewell to Fungie

Dingle, Ireland (CNN)When Ireland entered one of the world's most restrictive pandemic lockdowns in early 2020, Jimmy Flannery was worried how one of his best friends would cope.

Fungie, a bottlenose dolphin, had been living in Dingle, in southwest County Kerry, since 1983. From the day he arrived there, Fungie set himself out from the rest, throwing fish he'd caught onto local fisherman's boats and accompanying cold-sea swimmers as they trained.
Bottlenose dolphins' mouths naturally curve upwards, giving the appearance that they are always smiling. But locals would say that Fungie -- pronounced Fun-ghee -- was doing just that. It was this quality that compelled droves of tourists from around the world to visit this remote part of Ireland, and how a booming tourism industry was established at Europe's edge.
Fungie approaches a local fishing boat in Dingle Bay in 2002.
But after 37 years, Fungie vanished without a trace.
Now, a year after he was last seen, Flannery is hosting a memorial to celebrate the beloved dolphin.
Read More
He and other local boat operators offered free boat trips out to the entrance of the Dingle harbor on Sunday, with emotions running high as the sun finally broke through a blanket of grey cloud on the anniversary of Fungie's disappearance, leaving a rainbow in its wake. "He's with us today," Flannery said, as his first trip left the harbor.
Local boat operators leave the Dingle harbor for a Fungie memorial in Dingle, Ireland on Sunday.
"You try to keep jolly, but it's hard," said Bridget Flannery, Jimmy's wife and owner of Dingle Sea Safari, one of the companies that run boat tours out in the harbor. "We always knew Fungie wouldn't stay here forever. You wanna have a fairytale ending -- don't you -- that he's gone back to his buddies. But you know in your heart of hearts that he's in a good place, somewhere. Dingle is a good place, but he's in a better place."
Fungie was instrumental in bringing Dingle's tourism to life. But more importantly, he helped educate people about the wider marine world.

Early on in the pandemic, Jimmy Flannery, who has run the company Dingle Dolphin Tours for over three decades, "took it on myself to try and keep Fungie company," as tour operations were restricted from operating due to Covid-19 restrictions.
"He craved human interaction, that's what he lived for," Flannery said.
Jimmy Flannery, on his tour boat on Sunday. Behind him is a newly painted mural of Fungie that was painted on the old lighthouse and unveiled on Sunday.
But after six weeks, Flannery's check-ins had to stop as pandemic restrictions further tightened. By mid-October 2020, Fungie was gone.
"It was a massive shock," Flannery said, recalling that Fungie had never disappeared for more than a few hours at a time.
A major search operation was launched, with a dozen boats involved. Search and rescue divers carried out an extensive search of the coves and inlets where the dolphin normally swam, even carrying out a sonar scan of the seabed. 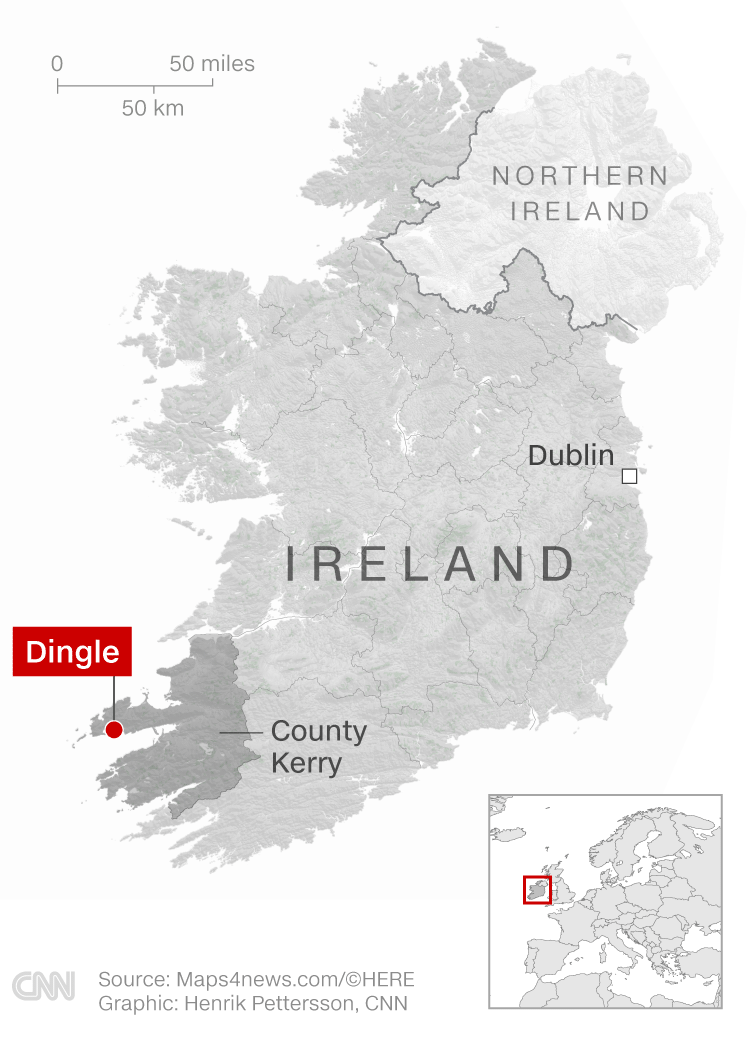 "I suppose it was inevitable from the day he arrived," said Kevin Flannery, a marine biologist and cousin of Jimmy Flannery who has been observing Fungie since 1983. "Everybody was expecting him to go one day, and to take one day at a time with him."
The Dingle native and founder of the Dingle Oceanworld Aquarium said that it's likely that Fungie is dead, with age a likely factor. Fungie was a teenager when he first showed up in Dingle, he said.
Male bottlenose dolphins have a life expectancy of up to 40 years. In 2019, The Guinness Book of World Records named Fungie as the longest-living solitary dolphin in the world.
It's unclear why Fungie chose Dingle, but Kevin Flannery believes that it's possible he might have been released to the wild after a dolphinarium closed in England.
"The public were turning at that time, there was a sort of green revolution," he said, noting that there were a few other dolphins that turned up around the same time in well-populated harbors across England.
Fungie's personality was captivating, but it also helped people understand why they should care about the ocean, he said.
"An awful lot of people got educated about the marine world in the realization that it wasn't the place where you dump plastic and things, that it was a living entity where you had all these whales, dolphins, cetaceans of all sorts -- and it was a place to be taken care of," Kevin Flannery said.
Tourists take a ride on Jimmy Flannery's boat on Sunday.
"I suppose in that sense Fungie has educated millions of people," he added, saying that t