The cast of the Netflix hit “Squid Game” appeared on “The Tonight Show Starring Jimmy Fallon” on Thursday, where they talked about the massive success of the show.

The cast – including Lee Jung-jae, Park Hae-soo, Wi Ha-joon and Jung Ho-yeon – appeared virtually. Park, who plays Sang-woo, told Fallon: “I’m so thankful that so many folks are watching this through so many media outlets, but I feel it even more at this very moment. It’s real. I feel it in my bones.”

The nine-episode series debuted on Netflix on Sept. 17 and is produced in South Korea. The fictional thriller is set in Seoul, where people with huge debts can play in a children’s game with cash to the winners and death to the losers.

Wi, who plays Jun-ho in the series, told Fallon: “I definitely think part of the appeal is the Korean children’s games. That can be very original, refreshing, and also shocking at the same time to the global viewers. I also feel like we did a good job expressing the true human nature of raw greed and human nature that took place inside the games, which I believe resonates with a lot of the audiences.” 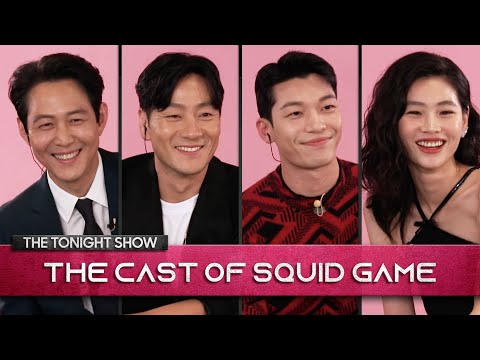