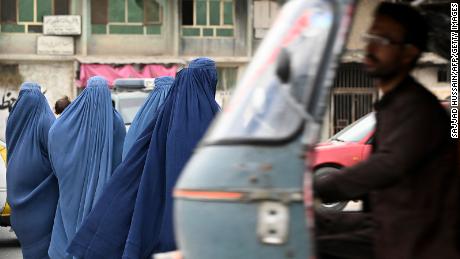 Women wait for a taxi in Kabul in July, weeks before the Taliban took control of the city.

'No one trusts anything that comes from the Taliban's mouth'

Since the Taliban swept to power in Afghanistan, seizing provincial capitals at lightning speed, it's been difficult to get a picture of what life is like for Afghans outside the capital, Kabul. Especially for women.
On Thursday, CNN reached three women -- all in their mid-20s and well-educated -- to get a glimpse of how their lives have been impacted by the swift regime change and how they feel about their futures under Taliban rule.
All three would have been young girls when the Taliban were previously in control, before being removed from power in 2001. CNN is not using their names, for their own security.

Internally displaced Afghan families, who fled from Kunduz, Takhar and Baghlan province due to fighting between the Taliban and Afghan security forces, are pictured in Kabul on August 11.
One woman has been sheltering in Kabul with her family ever since a rocket hit their home in the northern city of Kunduz.
Read More
"Kunduz is not a place to be at this moment. Nobody should be there," she said.
"I am connected with many of my former colleagues that are still stuck in Kunduz. Women are not leaving their homes; everyone is staying put at home," she added.
"Those who had jobs are scared to go outside. Everyone is afraid of the likelihood that the Taliban will stop them outside or put their lives in some form of danger."
She drew a distinction between anyone working for themselves and those who had a connection with the previous government.
"Those who worked for themselves don't see much of a big change. They are continuing their work at home, being self-employed. Government employees on the other hand are all at home and can't go back to work despite the Taliban announcing they are free to go back," she said.
"The thing is, no one trusts anything that comes from the Taliban's mouth."
"I highly doubt the Taliban have changed. They don't have the same values as Afghan people. Democracy is out of the picture for them. We are in the belief that the Taliban are putting up a front because the international community and United Nations is watching them closely," she said in a voice note to CNN.
"I am trying to see how I can leave the country entirely via NGO's and humanitarian agencies," she added. "Unfortunately, no one has helped me in this area."

Shops damaged after fighting between Taliban and Afghan security forces in Kunduz, northern Afghanistan, on Aug. 8, 2021.
In most provinces far from Kabul, life is already hard enough. Women are neglected due to a lack of opportunities and resources available for them, and Taliban pressure only adds to their already mounting challenges.
In Kunduz, a city of some 350,000 people, another interviewee told CNN she is stressed about meeting basic survival needs. Her father used to work for the United Nations. Now he's out of work.
"We are mostly concerned about food and water and where to get access to those necessities," she said.
She described the city as quiet, but tense.
"It's calm right now, but people are worried. The people here have lost their peace of mind, they are stressed. The Taliban are saying girls can go back to school, but once they do go, the [Taliban] complain that they must be escorted with a male relative. Girls cannot just go out by themselves anymore, they need a male chaperone," she said.
For her, one incident encapsulates the seismic change in Afghanistan.
"The other day, one of our female teachers went back to school and hopped on a rickshaw to get there. In Kunduz, it's very common to travel via rickshaw. However, the Taliban stopped them and beat up the driver for transporting her without a male chaperone. This is what we are currently dealing with," she said.
Ultimately, she does not feel secure and would want to leave Afghanistan, if she could.
"I want to leave Kunduz and leave the country to be safe. I am a local journalist here, and my only hope is organizations that are willing to help journalists flee. I've emailed everyone but received nothing in return."

Taliban fighters patrol the streets in Herat on August 14.
The city of Herat is Afghanistan's third biggest, with a population of more than 500,000. Situated on the road to Iran, it is a historical and cultural hub.
"Everyone is in an utter shock mode," said a third woman. "The fall of Ghani's government and the formation of a new regime under Taliban's rule has led to many questions in the minds of people."
She had a different outlook to that of the others.
"The Taliban is giving hope to all of our population that they can lead with peace and stability. The presence of the Taliban in cities such as Herat and Mazar-i-Sharif is strong in comparison to Kabul."
"Everyone is waiting to see what laws and rules the Taliban are planning for the people. For men -- this topic is not as concerning perhaps -- but women are stressed and are asking the question: Will we really go back to the '90's after 20 years of so much hard work and progress? Or will the situation be better this time?" she asked.
After Kabul's fall, Pen Farthing says he's not leaving until his team and their animals are safely out of Afghanistan
"Though men don't feel the same personal level of anxiety as women, they are worried. Men are worried for the future of their wives and children, especially those who have young daughters," she said.
Like the others, though, she said people are stunned by the pace of developments.
"People have experienced a strange shock, unaware of the future of themselves and their country. Everyone is telling me that an uncertain future outside of the country is much better instead of an uncertain future within the country. That's why people are looking for any excuse to leave. This is the level of desperation of my people."
And again those with any connection to the previous government have most to fear, she believes, whatever the promises made by the Taliban about a general amnesty.
"In Herat, Taliban are going door-to-door inside people's homes, especially in the homes of those who are connected with