Thank You!
Your effort and contribution in providing this feedback is much appreciated.
Close
Ad Feedback
Video Ad Feedback
00:54 - Source: CNN
Video shows town leveled by wildfire in California

Editor’s Note: CNN Weather is launching a weekly column, publishing Mondays with the weather news you should be aware of and the week’s hurricane outlook. Find updates each week here.

Pyrocumulus, dry lightning, firenadoes. It sounds like something out of an apocalyptic movie, but it’s a dangerous reality that firefighters are facing.

“We’re seeing truly frightening fire behavior, I don’t know how to overstate that. We have a lot of veteran firefighters who have served for 20, 30 years and have never seen behavior like this, especially day after day, and the conditions we’re in. So we really are in uncharted territory around some of these extreme, large fires and the behavior we’re seeing,” said Plumas National Forest Supervisor Chris Carlton.

The fires are carefully monitored and their movement is forecast, so the crews stay safe and don’t end up trapped inside the fire without an exit.

However, when wildfires are this intense, they can sometimes create their own weather, making their next move nearly impossible to predict.

The Dixie Fire has been one of those fires. Between August 4 and 5, the fire burned 44,000 acres.

That’s equivalent of burning the entire city of Washington, DC, in less than 12 hours. No one could outrun that speed, so knowing exactly what the fire will do is the difference in life and death.

“When fires seem to overtake the local weather conditions and create their own weather such as the pyrocumulus clouds, that is really a safety concern for everybody involved in that fire because we can no longer rely so much on the science or what we study with the weather patterns coming in,” says Robyn Heffernan, a national fire weather science and dissemination meteorologist with the National Weather Service.

A massive plume of smoke from the Dixie Fire can be seen from miles away.
Neal Waters/Anadolu Agency/Getty Images

Many times these pyrocumulus clouds can produce lightning, which put firefighters at the risk of getting struck by lightning, but the lightning can also ignite more fires and trap firefighters.

“When we see things such as pyrocumulus developing and things like that, we want to alert the firefighters to the fact that we have very unstable conditions,” says Heffernan. “The chance for erratic winds is very likely, a rapid wind shift, gusty winds, very rapid downbursts with heavy wind that can spread the fire in all directions.”

Firefighters on the front lines echo their concern for this potential danger.

“I’m concerned about being able to prepare the troops to do the best they can and to be safe as they can,” said Jesse Alexander, the fire chief for the Yuba City Fire Department in California.

His department has been battling the Dixie Fire since day one.

“It’s one thing to be smart and savvy with your fire behavior analysis, but when you get a firenado, there’s not a whole lot you can do to keep yourself safe and that always makes me nervous,” Alexander said.

A firenado or a fire whirl can occur when the hot air that’s rising combines with the erratic winds within the fire. They create more unpredictability within the fire and pose a serious danger for the firefighters.

“Even the best-trained firefighter with the best equipment, there’s still that potential that they are going to be in a circumstance they weren’t expecting,” said Alexander.

There are meteorologists working hard to develop technology to predict when and where these dangerous fire weather conditions will happen.

“That’s a relatively new area of science that’s really coming into prime time within the last five years or so and we have a variety of coupled fire models that we do use experimentally now, so that helps with trying to predict what that fire might do,” Heffernan said.

With climate change causing fires to become bigger, and fire seasons to become longer, this science of weather within a wildfire will be more useful than ever.

Right now, the Dixie Fire remains the second biggest fire in California history. It has burned more than 463,000 acres and is 21% contained.

In the past couple of days, Turkey has been ravaged by more than 108 forest fires which killed at least eight people.

Wildfires caused the evacuation of more than 2,000 by boat from the popular tourist destination of Bodrum on Saturday and Sunday.

The flames have been fueled by scorching summer temperatures and conditions that experts say have been worsened by climate change. 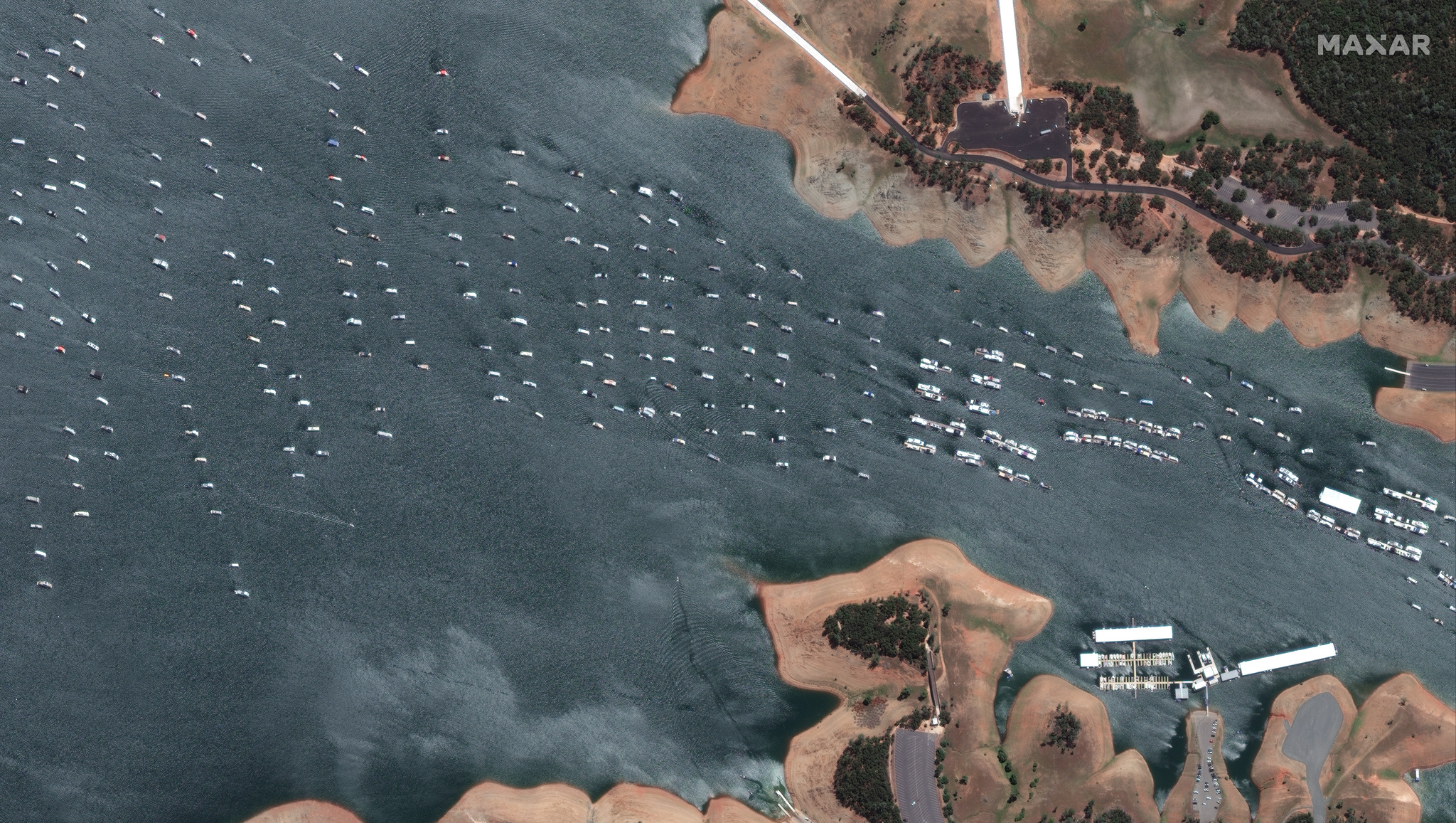 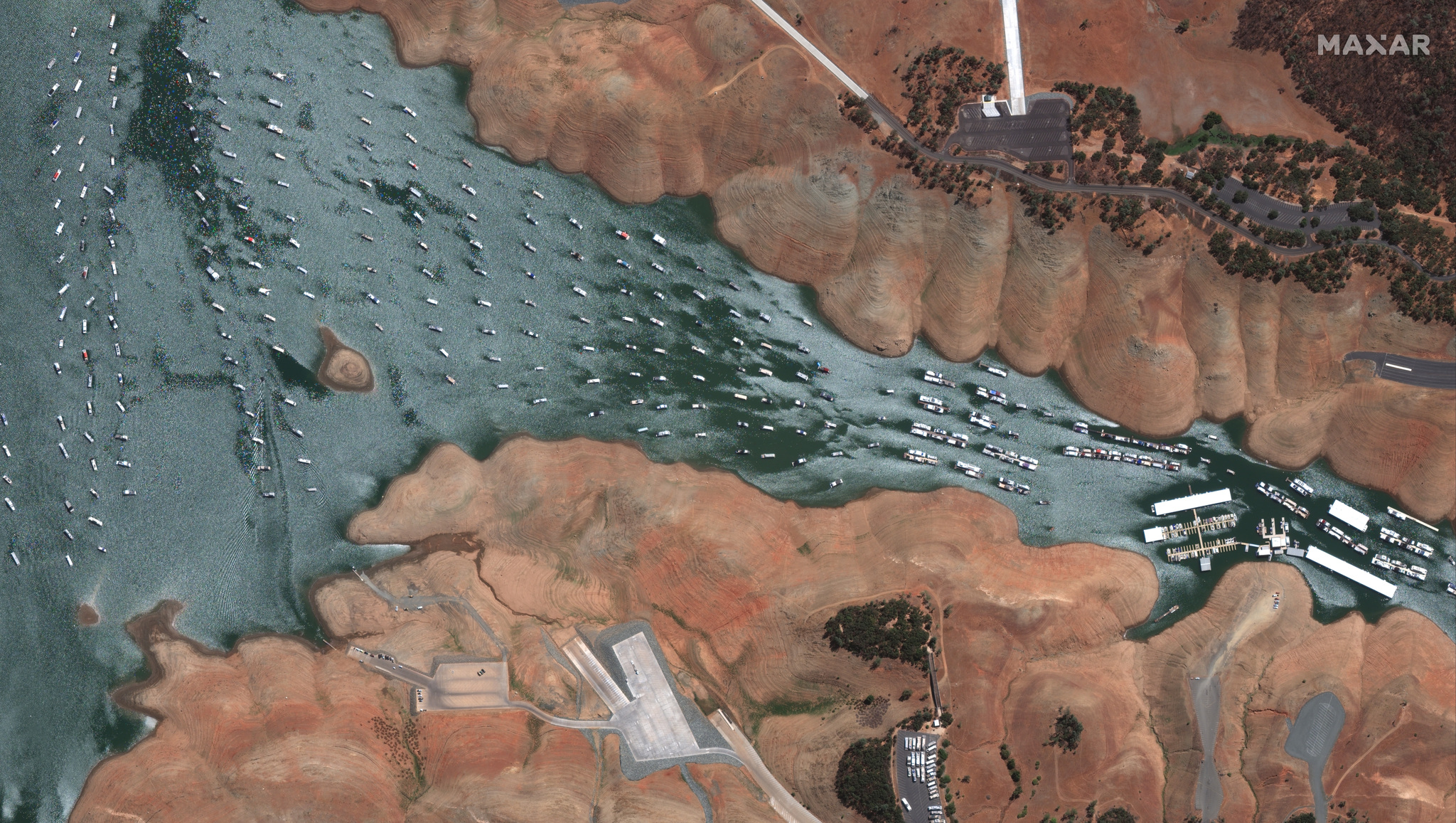 Space technology company Maxar released new high-resolution satellite imagery this week of California’s Lake Oroville that starkly shows the severity of the state’s drought conditions. Water levels at the lake have dropped to historically low levels, forcing the state’s second largest reservoir to suspend hydroelectric power plant operations for the first time since it opened in 1967.

The satellite images compare and contrast the lake and dam from June 2020 to August 2021 and the drop in the lake’s water levels is significant.

Tropics are heating up with a Florida impact possible next week

Areas in the Atlantic and Caribbean most likely to see tropical activity this time of year.
CNN Weather

The first named tropical system in the Atlantic since early July could form by Wednesday, and tropical storm warnings are likely to be issued in Puerto Rico and other Caribbean locations on Monday.

A low-pressure system located about 150 miles east of Barbados is forecast to strengthen into a tropical depression Monday afternoon or evening according to the National Hurricane Center.

“Tropical storm watches or warnings could be required today with shorter-than-normal lead times for portions of the Lesser Antilles, the Virgin Islands, and Puerto Rico,” the hurricane center said.

Dangerous heat will build in the Pacific Northwest again this week, where excessive heat watches extend from California to Washington, including Seattle and Portland.

“Seattle will top 90 degrees by Wednesday into Thursday, while Portland approaches 100 on Wednesday and tops 100 degrees from Thursday into Saturday,” said Hennen.

Another dangerous heat wave will build in the west this week, as fires rage out of control.
CNN Weather

The heat building in the Pacific Northwest will only make fire conditions worsen through the week.

There are currently 107 large wildfires burning across parts of 15 states. These fires have scorched more than 2 million acres.

“Red flag warnings are posted today in Wyoming, where gusty winds are expected, and fire weather watches include parts of Oregon, Montana, Wyoming and the Dakotas, where a building heat wave will increase the fire threat,” Hennen said.

The smoke from the fires are spreading far and wide. Millions are under air quality alerts from California to Minnesota.

Denver had the worst air quality of any major city in the world on Saturday, and many parts of the Rockies remain in dangerous levels.

The UN’s Intergovernmental Panel on Climate Change says recent heat waves and other weather events can be attributed to climate change.

This is the number of acres burned so far this year in California. This number is well ahead of last year’s pace, when only 273,301 acres had burned by this date. 2020 was the worst fire season in modern history, with a total of 4.25 million acres burned.

CNN’s Haley Brink and Hannah Gard contributed to this report.