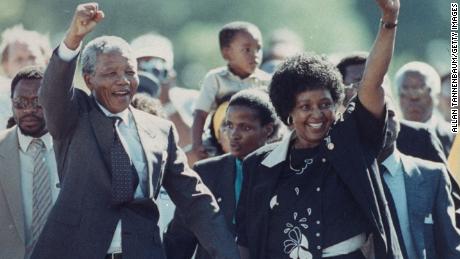 Nelson Mandela and wife Winnie raising fists upon his release from Victor Verster prison after 27 years. What Mandela learned in prison can free Americans trapped in their own cycles of bitterness.

We need Nelson Mandela's example more than ever today. How the South African leader's radical empathy can help the US today

(CNN)One autumn evening, Nelson Mandela answered a knock at his front door and found himself facing his most dangerous enemy.

The man's name was General Constand Viljoen, and he was dubbed the "ultimate enforcer" of apartheid, the brutal system where Whites had ruled over Blacks in South Africa for much of the 20th century. Viljoen was the former chief of the South African Defense Force, which had crushed dissent in Black townships and, some say, assassinated Black activists. He thought Mandela was a terrorist who deserved execution.
"Ah, hello, General," Mandela said, greeting Viljoen with a big smile. "How very good to see you. I have heard so much about you. Thank you very much for accepting my invitation."
It was October 1993, and both men were trying to stop a looming civil war. Many White South Africans were terrified of losing political power in an impending national election. Political factions murdered one another in the streets. And an alliance of White supremacist groups had asked Viljoen to lead an armed insurrection against the government. Viljoen didn't trust Mandela but accepted his invitation as a last resort to avert war.
But then something happened to Viljoen after he talked over tea with Mandela. By the end of the evening, Viljoen had not only accepted Mandela's request to call off the insurrection; he persuaded other White South Africans to participate in the upcoming election. And when Mandela was inaugurated as South Africa's President a year later following the nation's first fully Democratic elections, Viljoen stood in the middle of the new parliament, saluted him, and would later call him "the greatest of men."
Read More
How did Mandela change the mind of a man once described as the "ultimate racist?" The answer to that question holds some critical lessons for the treacherous political environment in the US today.
As the world commemorates the 103rd birthday of Mandela this Sunday, this is the perfect time to explore how Mandela helped steer South Africa through some of the same racial and political divisions that engulf the US today.

He took a political divide and racial divisions that go way beyond what you're living in the US right now, and he managed to build a bridge.

"He took a political divide and racial divisions that go way beyond what you're living in the US right now, and he managed to build a bridge," says John Carlin, author of three books on Mandela, and a journalist who befriended Mandela .
"For those people in America who would like to explore how to build bridges across chasms that get ever wider in America, he's worthy of study," says Carlin, author of "Knowing Mandela," and "Invictus," which was made into a Hollywood movie.
The standard explanation for Mandela's success is he forgave his former captors, flashed his luminous smile, and won them over with decency. The truth is more complicated, and so was Mandela.
We can learn a lot about how Mandela operated by looking at three crucial decisions he made when facing some of the same issues that divide America today.

He turned empathy into a political weapon

If you think the mood in the US is ugly today, consider the country Mandela was trying to lead in the early 1990s.
A mob of armed White citizens stormed the most important political venue in the country as lawmakers fled for safety in an attempt to derail the upcoming elections. White citizens stockpiled guns. Unscrupulous political leaders egged on street violence to raise their profiles and build followers. It looked in some ways like a sneak preview of the Jan. 6 insurrection at the US Capitol.
A country built on White supremacy was trying to become a multiracial democracy, and many observers didn't think they would make it.
Police drag a young black student to a police van after rioting broke out on Wednesday, August 12, 1976 in a African township near Cape Town, South Africa. Images of White police brutalizing Blacks were common during the apartheid era.
At the center of much of the violence was fear of what the Afrikaners -- South Africa's dominant White ethnic group -- called the "Black danger," or "Swart Gevaar." Apartheid denied 85% of the population, those born with dark skin, any political power. Blacks couldn't vote, compete with Whites in the workplace; couldn't use the same public toilets, buses, beaches, and many lived in squalor.
"White South Africans were the most privileged people in the world in the 1990s," Carlin says. "Even if you were a working-class White guy in a factory, you possibly had two [Black] live-in maids and a swimming pool."
Mandela had to sell democracy to a people that had richly benefitted from its absence. That sale became harder on April 10, 1993, when a White supremacist assassinated Chris Hani, a beloved Black South African leader. Hani, widely seen as Mandela's heir apparent, was a surrogate son to Mandela.
But that's when Mandela made a crucial decision that stopped South Africa from tumbling over what he called "the brink of disaster."
Mandela went on national radio and television to appeal for calm. He didn't just focus on the White supremacist that murdered Hani, he highlighted a White hero, a White woman who witnessed the murder, and helped authorities identify the killer by writing down the license plate of the killer's getaway car.
"A White woman, of Afrikaner origin, risked her life so that we may know and bring to justice this assassin," Mandela said.
Afrikaners had caused Mandela a lifetime of anguish. Their regime had sentenced him to life in prison in 1964. They took him away from his family and his wife. They tortured and assassinated his closest friends.
And yet, in that moment, he chose the highlight the decency of an Afrikaner woman he had never met.
"What I know is that if he hadn't been around, the country would, in fact, have torn itself apart," Archbishop Desmond Tutu said about Mandela's conduct after Hani's assassination during a PBS interview.
It's become customary for people to demonize political opponents in this country. Videos go viral on social media that show commentators "destroying" their political opponents. Surveys reveal that while Americans are more open to interracial marriage and marriage equality, more now also oppose "interpolitical" unions, or marriages to someone of another political party.
But Mandela turned empathy into a political weapon. He used it not only to diffuse a national crisis but to survive prison. Mandela developed such a close relationship with Christo Brand, his White jailer, that Brand once snuck his infant son into prison just so Mandela could hold his son in his arms.
Nelson Mandela stares out of the window of the prison cell he occupied on Robben Island for much of his 27 year prison sentence. It was at Robben that Mandela learned the language and ways of his White jailers.
Those who knew Mandela as a younger man say he was a hothead with a temper, but prison changed him. He developed a radial form of empathy that went beyond political expedience.
"Prison steeled him, but it broke many others," Richard Stengel, the author of "Mandela's Way: Fifteen Lessons on Life, Love, and Courage," wrote. "Understanding that made him more empathetic, not less. He never lorded it over those who could not take it. He never blamed anyone for giving in. Over the years, he developed a radar and a deep sympathy for human frailty."

He addressed the hearts, not the mind of his opponents

Professional athletes refuse to stand for the national anthem. Protesters clash over the removal of Confederate monuments. People still clash over how racism should be taught in the classroom.
Mandela faced many of the same challenges when on April 27, 1994 he became the first democratically elected President of South Africa. He had to decide how South Africa came to terms with the racist symbols of its past.
A debate over South Africa's national anthem revealed how Mandela adroitly faced this challenge.
Leaders in the African National Congress, the party Mandela led, voted to abolish the anthem. It was seen as a racist relic because it brazenly celebrated the White conquest and subjugation of Black people. They voted to replace it with Nkosi Sikelel iAfrika, a stately, s