This forecast could extinguish your July 4th BBQ plans

Editor’s Note: CNN weather is launching a weekly column, publishing Mondays with the weather news you should be aware of and the week’s hurricane outlook. Find updates each week here.

The weather on the Fourth of July will either be too wet, too hot or too dry, depending on location, as many people look to get outside and celebrate Independence Day for the first time in two years.

The South has been one area that has been consistently inundated with rain during the last few months. Most recently, Tropical Storm Claudette brought nearly a foot of rain to some areas in Mississippi and up to 8 inches in portions of Louisiana.

Houston has also had drenching rain with nearly 14 inches between May 11 and June 3, marking the second wettest period on record for the city.

Now, looking forward to the July Fourth weekend, the forecast looks like it’s going to be wet in the South yet again.

“Thankfully we have had somewhat of a break for the ground to dry out but we are reentering a wetter pattern,” said Brian Kyle, the lead forecaster at the National Weather Service (NWS) in Houston. “Deeper gulf moisture will be moving into the area, along with daytime heating will provide good chances of showers and storms each day.”

And that chance of rain will extend across the South and up the Eastern Seaboard this weekend. It will be a wet holiday weekend for millions.

As people head to the beaches for the long weekend, more showers and storms mean more risk.

“It’s a big time with the area beaches and rip currents are always a concern going into the holiday week,” Kyle said.

The isolated storms off the Gulf will bring periods of strong southerly winds which could create rip currents. They could also contain lightning and periods of very heavy rainfall.

“The biggest concern (in the Houston area) are the rainfall rates, more so than the amount,” Kyle said. “The metro areas with a lot of concrete can sometimes get rainfall rates of 3-inches plus an hour, and the ground just can’t absorb it that quickly. And that’s what typically causes the flash flooding in this part of the state.”

While the South contends with drenching rain, the West can’t seem to get more than a few drops. With 91% of the west in some level of drought, the conditions are dire.

“We talk to emergency managers and folks in the fire department and they say 4th of July is their busiest time of year, because of the likelihood of getting a lot of calls,” said NWS Las Vegas Meteorologist Chelsea Peters.

Most of the local fireworks are contained within the city, and don’t seem to spark as many wildfires, Peters said.

However, “house fires and trees in the backyard catch on fire because it’s so dry, so if any embers fall, roofs and trees could ignite.”

Las Vegas is still waiting on monsoon season – an annual period of summer rainfall – to begin. Peters is optimistic about the monsoon, but the rain has been so sparse that it might not be enough to overcome the persistent drought.

“Over the past year we haven’t had a whole lot of weather, particularly heavy rainfall events,” Peters said. “Looking at the big picture, a half an inch here and there is not going to help the deficit that we have in the region.”

And the heat is expected to continue into the weekend.

While places like Seattle will see temperatures come down a little, interior Washington and Oregon will continue to see temperatures in the triple digits. It won’t be quite as hot as this past weekend, but temperatures will run at least 20 degrees above normal in some locations.

This not only makes it dangerous and uncomfortable, it worsens the drought that is already at a critical level.

“We have already had a few rounds of excessive heat and summer has just begun, so that is continuing to dry out the little bit of moisture we have had,” Peters said.

Some jurisdictions are canceling fireworks because of the historic drought, to prevent wildfires. Salt Lake City Mayor Erin Mendenhall told residents last week that fireworks just aren’t worth the risk this year.

Fire officials in the San Francisco Bay Area warned that the grass is so dry, a lit sparkler would only take 30 to 60 seconds to ignite a blaze that could no longer be controlled by a garden hose.

CNN.com will have a full report later this week with everything you need to know before lighting fireworks this weekend. 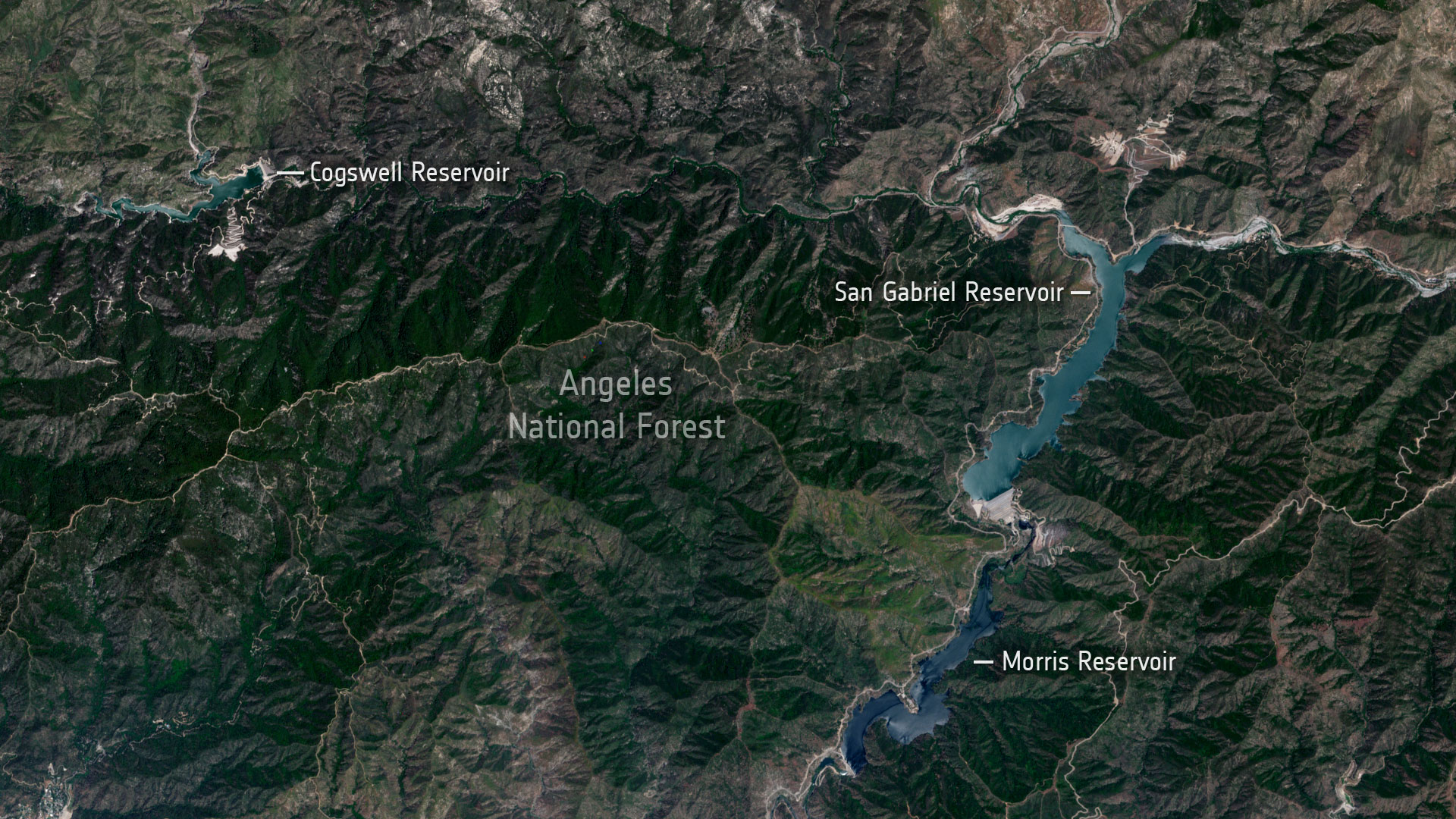 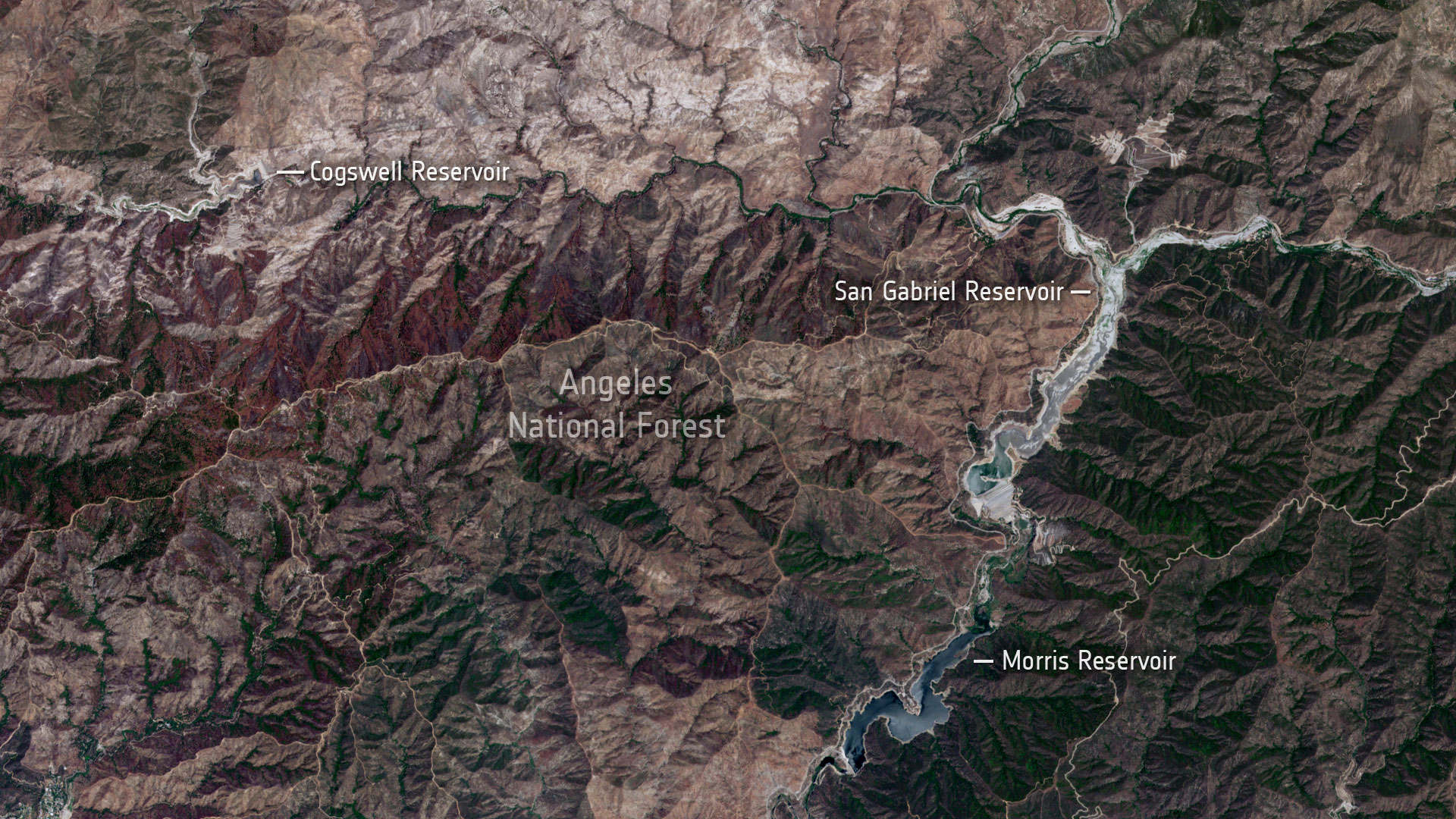 Remarkable satellite images captured a year apart illustrate the severity of the California drought and the impact of the 2020 Bobcat Fire and Ranch 2 Fire in Los Angeles County.

The European Space Agency shared the imagery of the forest, which is just north of the greater Los Angeles area, on its Facebook page last week.

Between June 2020 and June 2021, Angeles National Forest went from green and lush to brown and parched. Water in three reservoirs – San Gabriel, Morris and Cogswell – has declined significantly. All of the reservoirs are outlined in brown in the 2021 shot, denoting how much the water level has dropped.

The Bobcat Fire burned nearly 115,000 acres of the San Gabriel Mountains and some of the surrounding area between September and December. It was one of the largest fires in Los Angeles County history.

Take a look at the historic drought through pictures here. See more before and after drought images from space here.

115: The hottest temperature recorded in the Pacific Northwest over the weekend.

The town, which sits on the Columbia River in Southern Washington, will see highs hit the century mark again today as the Pacific Northwest continues to deal with record-breaking heat. Pasco is expected to stay above 100 degrees Fahrenheit for a high temperature all the way through the 4th of July.

Blink and you might have missed it: Tropical Storm Danny formed Monday off the Southeast Coast. Just as fast as it spun up, it made landfall and dissipated. The fourth tropical storm of the hurricane season made landfall just north of Hilton Head, South Carolina, around 8 p.m.

Though Danny’s impact was minimal, CNN Weather’s Chad Myers says coastal areas in the Southeast are still dealing with significant beach erosion from Hurricane Matthew, which tracked north along the coast in 2016.

“Any storm surge or high waves can easily cause more erosion and flooding where the dunes are still missing,” Myers said.

Something to watch: Water in the Gulf of Mexico is already running 2 degrees above normal for this time of year, which is a favorable environment for tropical storms. There are also two areas of enhanced thunderstorms far out in the Atlantic to keep an eye on. There is so far no threat to the US from either of those potential systems. The National Hurricane Center gives one a 10% chance and the other a 10% chance of developing into a tropical system in the next 48 hours.

The drought in the West is expected to persist over the next three months, in an area that is already under extreme drought conditions.

In the latest drought monitor that was released on Thursday, 91% of the West is in drought, which is up from 81% just last week.

More than 55% of the West is under “extreme” or “exceptional” drought, with drier-than-average conditions expected through the next three months.

Temperatures have been quite extreme for this time of year, with temperatures in the West at times, running 30 degrees above normal.

“Even though it is late June, the temperatures are favored to be quite extreme and so negative health impacts (dehydration, heat stroke, poor air quality, etc.) are also a risk,” Gottschalck told CNN in an email.

In the South, above-normal rainfall is expected during the next three months in areas that have seen record rainfall during the last several months.

“Given the current extremely wet surface conditions in many areas, there are concerns given the precipitation outlooks that already present flooding will continue and the flooding threat across the whole region will remain elevated,” Gottschalck said.

This is especially true for areas along the lower Mississippi River Valley that saw extreme rainfall due to Tropical Storm Claudette.

In order for these persistent weather patterns to change across the West and South, several things would need to take place.

“The Southwest U.S. monsoon needs to be robust this summer which will help improve extreme drought conditions in the Southwest and parts of the Rockies and Great Basin,” Gottschalck said. “In 2019 and 2020 the monsoon failed.”

Although there is some rain forecast for this region in the next several weeks, it’s too early to say if this will persist through the summer months.

“At the current time, however, available information does not favor this scenario,” Gottschalck said.

In the South, the upper-level trough that has aided in the persistent thunderstorms, needs to lift northward. This would favor or aid stronger sub-tropical ridging to extend eastward from the southwest Atlantic to the Southeast and Gulf coast region and so decrease the overall rainfall threat (less events with lower precipitation totals) for the region.

The outlooks, however, “do not point in this direction at the current time,” said Gottschalck.

At least five people were killed and dozens injured after a tornado hit several villages in southeast Czech Republic, according to local police and emergency officials. This rare tornado touched down on Thursday night, wreaked havoc on seven villages and left roughly 30 thousand households without power.

Is a “red sky at night” really a “sailor’s delight?” It’s biblical!

A red sky at sunset can indeed mean fair weather. The sun sets in the west, which is the general direction from which storms will travel. If the sky is red at sunset, it means dry weather is approaching. The reddish hues are typically caused by the dust, aerosols, even smoke that accompanies dry air and takes on a more pinkish hue.

This proverb likely originated from the Bible (Matthew 16:2-3): Jesus said, “When it is evening, you say, ‘It will be fair weather, forthe sky is red.’ And in the morning. ‘There will be a storm today, for the sky is red and threatening.’ Do you know how to discern the appearance of the sky, but cannot discern the signs of the times?”

What about “red sky in morning, sailors take warning?” If rain is approaching, the sun would illuminate mid-level clouds to create a red sky in the morning. If those clouds develop further, they could grow into stormy weather – something sailors would be wise to avoid.