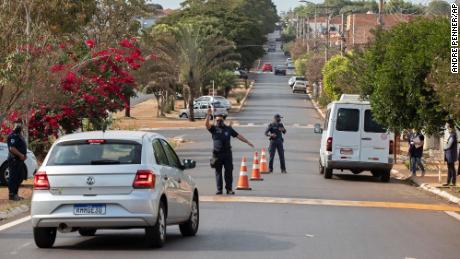 Police check commuters for symptoms of COVID-19 at the entrance of Serrana, Sao Paulo state, Brazil, Friday, May 28, 2021. Brazil's Butantan Institute has finished a mass vaccination of the city's entire adult population with doses of Sinovac, to test the new coronavirus' behavior in response to the vaccine. (AP Photo/Andre Penner)

Serrana (CNN)Hope has returned to the small city of Serrana, Brazil, after researchers vaccinated almost its entire adult population in a city-wide medical experiment this spring.

"Everything is practically open now, and the atmosphere is so different, so much lighter and joyful. We feel safe while the other cities around us are in a very difficult situation," says Ricardo Luiz, owner of a well-known restaurant in Serrana.
Four months after the kickoff of the experiment known as Project S, this quiet city surrounded by sugar plantations has acquired an atmosphere of pre-pandemic days, Luiz says.
Read More
His business is getting back on its feet after one year of hardship and it's currently bringing in 70% of the revenue it made before the pandemic.
"People feel safe to leave the house," he says, adding that he no longer feels afraid for his family or acquaintances traversing the city's hot and dry streets. "We know everyone here, and nowadays it's rare to hear about cases and deaths," he says.
Nationwide, Brazil has the second-highest number of deaths from Covid-19 in the world, after the US, and it is heading to its third wave with daily cases and deaths on the rise. Only 10% of Brazil´s population is fully vaccinated.
But people living in Serrana say they're experiencing a very different reality, thanks to Project S.
People in Serrana waiting to be vaccinated on February 25.
The project was coordinated by the biomedical center Butantan Institute in partnership with the Sao Paulo University of Medicine in Ribeirao Preto. This spring, researchers gave the full two doses of the vaccine Coronavac to 27,160 adults -- about 95% of the city's adult population. The Coronavac, designed by Chinese pharmaceutical Sinovac and produced in part in Brazil in partnership with Butantan, has shown a global efficacy of 50.8% in Phase III tests.
Researchers' full findings from Project S have not yet been peer-reviewed or published. However, according to preliminary results released on June 1, the study showed an 80% reduction in the number of symptomatic cases. Covid-related hospitalizations have fallen by 86% and mortality by 95% -- figures hailed by Sao Paulo Governor Joao Doria as a good omen for the rest of the country.
Traveling to Brazil during Covid-19: What you need to know before you go
According to the study, the immunization generated a kind of "immune belt" in Serrana, drastically reducing the transmission of coronavirus in the municipality even as the virus raged throughout the country.
"The most important result was to understand that we can control the pandemic even without vaccinating the entire population. When coverage reached 70%, 75% (of Serrana's population), the drop in incidence was noticed even in the group that had not yet completed the vaccination schedule," said Ricardo Palacios, medical director of clinical research at Instituto Butantan in an interview with CNN International a day after the news conference.
But until the Butantan Institute releases its complete study data and it is peer-reviewed, not everyone is leaping to applaud the results -- nor to relax hygiene precautions.
Jose Angelo Marques owns a beauty salon in Serrana, and was fully vaccinated back in April. His business is operating with protocols established by Sao Paulo state government such as limited attending capacity and distancing between customers, and Marques says he won't lift them until he sees the numbers behind the percentages.
"I wish I could see the numbers. That would make me feel safer," he says.
Jose Angelo Marques and his family in Serrana on February 25.
He, his wife and his parents all were infected with Covid-19 last year. Most had mild symptoms or were asymptomatic, but Marques' 81-year-old father died from Covid-19 less than a month later.
Being vaccinated has helped the family to deal with their grief, however, Marque admits. "We have now loosened up a bit. We are now close to each other, hugging each other and that has been helping us a lot to cope with the absence of my father."

About 330 kilometers away from the state capital Sao Paulo, Serrana is considered a bedroom community, with much of its population commuting to work in larger neighboring cities like Ribeirao Preto. That flow of people caused a high prevalence of Covid-19 infections at the beginning of 2021, according to Marcos Borges, main researcher at Project S.
"More than 10,000 people here go to work in other cities. This leads to the vast spread of these infectious and contagious diseases," said Borges. "One out of 20 people in Serrana was infected and transmitting the disease and that caught our attention."
"We were suffering so much with Covid-19 here at the beginning of the year. It hit us very hard. Our small health system collapsed. It was like a very dark cloud was above the town," says Serrana Mayor Leonardo Capitelli.
Brazil has struggled to acquire sufficient vaccines for its population of 211 million. Knowing that herd immunity could be a long time coming for the country, Butantan Institute Director Dimas Covas and Borges sought to vaccinate a high percentage of the population in Serrana in a short period of time, to see if herd immunity could be achieved locally.
"So we wanted to test whether vaccination can prevent the transmission of the virus, reduce serious cases and hospitalization," Borges says. Serrana's then-high prevalence of Covid-19, small population and proximity to the medical university in Ribeirao Preto and the state hospital, made it an ideal candidate.
The method used in the clinical trial is called a stepped-wedge trial, in which the city was divided into 25 sub-areas, forming four large population groups that received the vaccine in successive weeks between February and April.
A graphic shows the Project S Vaccination timeline.