New York City mayoral candidate Andrew Yang on Thursday accused a New York Daily News cartoon of engaging in racist tropes and playing on an idea of Asian-Americans as permanent tourists and outsiders.

The cartoon, drawn by artist Bill Bramhall, depicts Yang exiting the Times Square subway station as a souvenir shop owner says, “The tourists are back!” The candidate has at times taken heat for not voting in past mayoral races and for leaving the city at the height of the Covid-19 pandemic, though he said that Times Square was his favorite subway station.

“I think that anyone objective looking at that cartoon knows that it’s playing on an idea of Asian-Americans as permanent tourists and outsiders. And we’re at a point in our history, unfortunately, when Asian-Americans are getting beaten on the streets of New York and told to go back where we came from, or that we don’t belong,” Yang told CNN’s John Berman Thursday on “New Day,” referencing the surge in reported hate crimes and discrimination against the Asian American community amid the pandemic.

“Andrew Yang is a leading contender to be mayor of New York City, and as commentators, his opponents and The News editorial board have recently pointed out, he’s recently revealed there are major gaps in his knowledge of New York City politics and policy. Nor has he ever voted in a mayoral election,” Greenman said. “Bill Bramhall’s cartoon is a comment on that, period, end of story. This is not a racial stereotype or racist caricature.”

Greenman said that Bramhall changed his original, online cartoon for the newspaper print edition after “people reacted badly to how Yang’s eyes were drawn.”

“Bill altered the drawing out of sensitivity to those concerns, without changing the concept of the cartoon, which he and we stand by,” he told the newspaper. 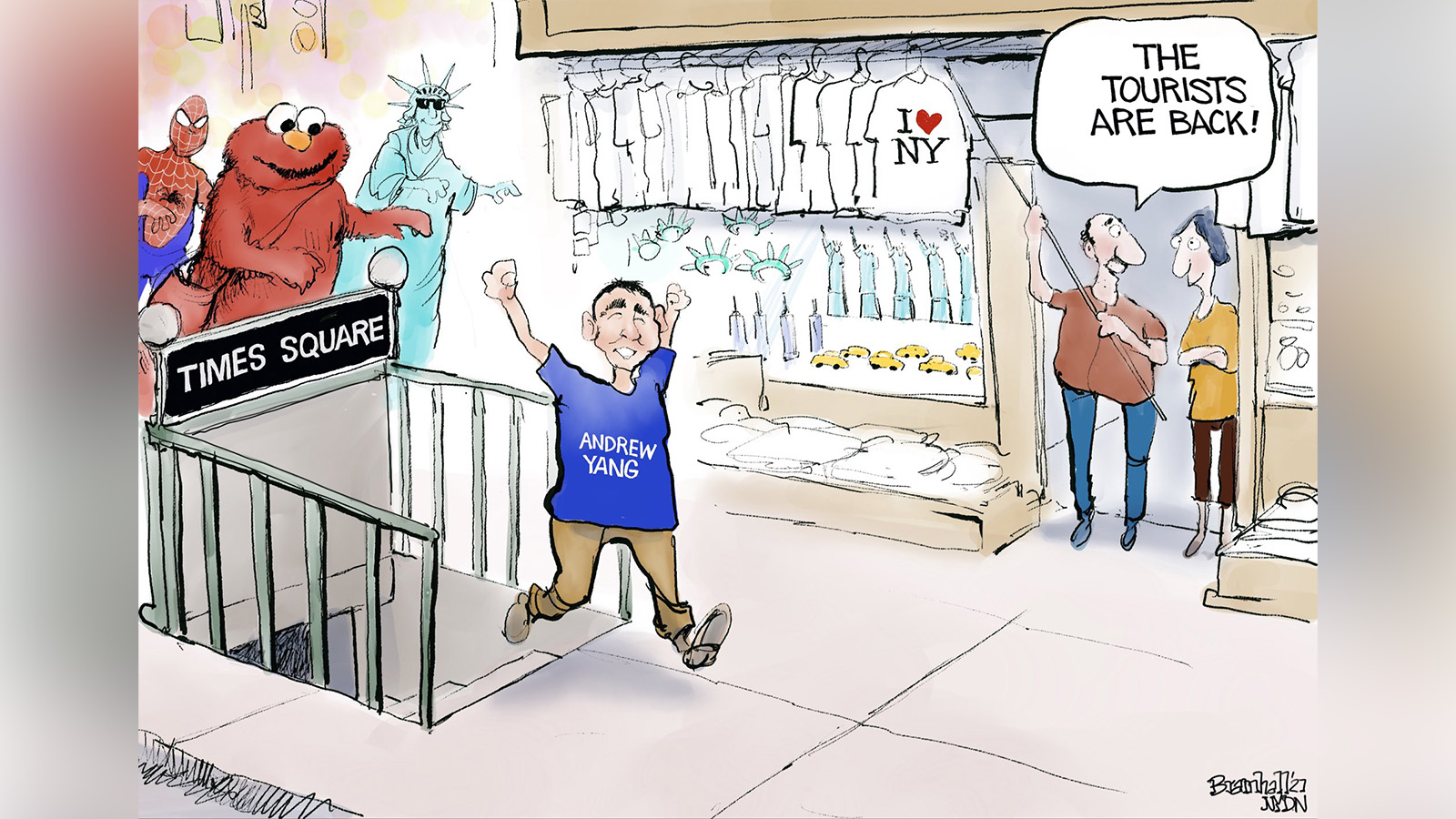 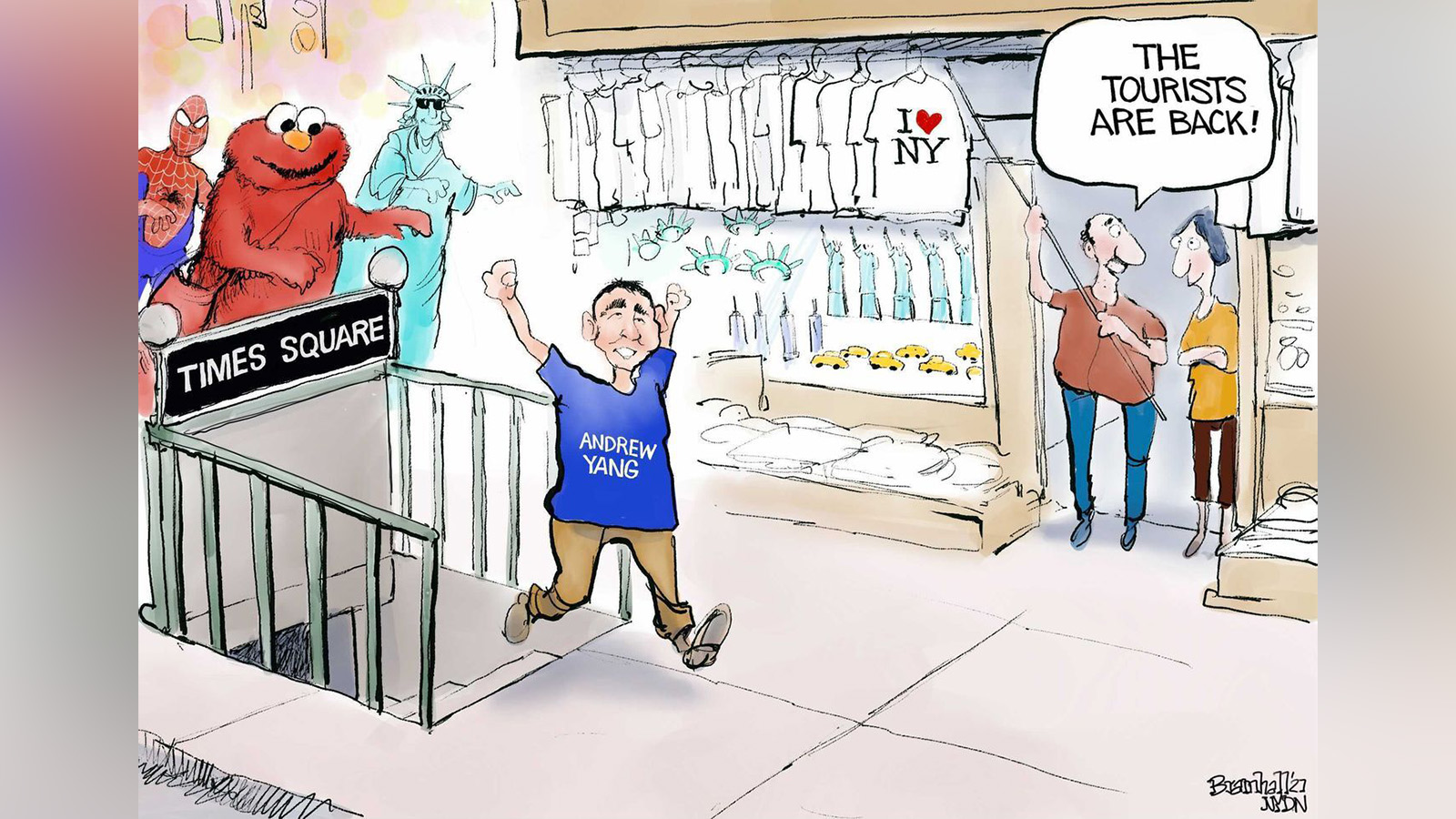 Yang hit back on Thursday, telling CNN that “The Daily News characterizing it as simply a political commentary that does not include race just rings false.”

“The cartoon does not work if it’s a person of a different race,” he added. “And I said Times Square is my favorite subway stop because I live blocks away in Hell’s Kitchen and use that stop to get around the city. It goes just about anywhere in the city because there’s so many lines that converge there.”

Born in Schenectady to Taiwanese parents, Yang has lived in New York City for 25 years and his wife, Evelyn, is from Queens.

A former businessman, Yang had been faring well in the mayoral race due to his high level of name recognition following his 2020 Democratic campaign for president, during which he attracted attention for his freedom dividend plan and earned himself a devoted following. But he has been criticized over his lack of government experience.

Asked Thursday how he would argue he knows as much about New York City politics and government as the other candidates, Yang told CNN, “I am a public school parent. I know what families are going through here in the city.”

Yang is one of several candidates vying to replace Mayor Bill de Blasio in a competitive Democratic primary set for June 22. A second debate is scheduled for next Wednesday, and a third debate is set for June 16.