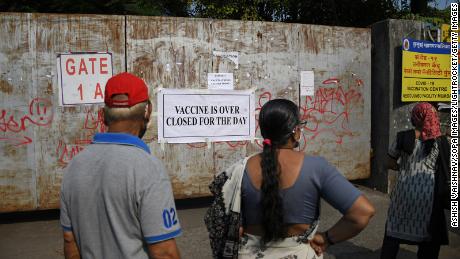 Ruth L. Okediji is the Jeremiah Smith Jr. Professor of Law at Harvard Law School. The views expressed in this commentary belong solely to the author. Read more from As Equals. For information about how the series is funded and more, check out our FAQs.

On Wednesday May 5, the US moved to back a Covid-19 vaccine patent waiver that was being debated at the World Trade Organization (WTO).
The proposal, first put forward by South Africa and India in October 2020, seeks to temporarily lift certain intellectual property rights that belong to pharmaceutical companies so that other nations can develop generic versions of the drugs.
As awareness of vaccine inequality has grown, patents and other types of intellectual property have become central to how the world emerges from the pandemic.
Read More
Ironically, the patent system was supposed to improve public welfare. Here's how the rationale goes: in return for disclosing her invention -- i.e. by seeking a patent -- an inventor would be able to, among other things, exclusively make, use, and sell that patented product for 20 years. This would -- as the US Constitution puts it -- "promote the progress of science and the useful arts" by incentivizing the creation and dissemination of lifesaving products.
In practice however, the global patent system has enabled the creation of drugs that pharmaceutical companies can sell at high prices, to the patients who can afford them and largely for diseases prevalent in wealthy countries.
Pharmaceutical companies argue that these high prices are necessary to recoup substantial research and development (R&D) expenditures, but patent rules also prevent poor countries from producing medicines locally to meet domestic needs.

"We worried that when the [TRIPS Agreement] was signed, we were simultaneously signing the death warrant for thousands of those in developing countries who would be deprived of life-saving drugs. Our worries turned out to be real"

In 1995, in response to growing competition from the burgeoning generic drug industries in countries such as India and Brazil, multinational pharmaceutical companies in the developed countries urged negotiation of a new multilateral Agreement on Trade Related Aspects of Intellectual Property Rights -- the TRIPS Agreement -- which is administered by the WTO. This required countries to offer patent protection in all fields of technology.
Prior to the TRIPS Agreement, some developing countries restricted patent rights on pharmaceutical products. Many wealthy countries, such as Japan, had themselves done this, even as recently as the 1980s.
But as knowledge-based goods became an important source of national wealth for industrialized nations, multinational companies sought more stringent protection for intellectual property (IP) globally. This led to TRIPS' unprecedented merger of trade and patent law, along with an unparalleled expansion of rights over pharmaceutical products.
As the Nobel prize-winning economist Joseph E. Stiglitz wrote in his book, Making Globalization Work: "We worried that when the [TRIPS Agreement] was signed, we were simultaneously signing the death warrant for thousands of those in developing countries who would be deprived of life-saving drugs. Our worries turned out to be real."

What now? We need new models to incentivize innovation

Given the gap between the intended societal benefits from innovation and lack of access to medicines, and taking into account that patents are an important source of economic return for the risks involved in innovation, a rudimentary question to ask is this: is a different model of funding at least some pharmaceutical innovation feasible?
The answer is yes. Not only is a different model feasible, it has already been used in the US -- at the onset of the pandemic.
On March 30, 2020, The US Department of Health and Human Services (HSS) began Operation Warp Speed (OWS), intended to expedite the development of a Covid-19 vaccine.
According to one analysis, OWS "fundamentally changed how pharmaceutical and biotechnology companies assess the risk of conducting large-scale clinical trials on a brand-new vaccine."
The US government built the requisite infrastructure and gu