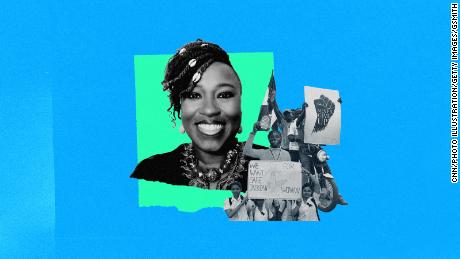 Shola Mos-Shogbamimu: To fight injustice, focus on the power you have

Shola Mos-Shogbamimu is a lawyer, political and women's rights activist, and the author of This is Why I Resist. Follow @sholamos1 on Twitter. The views expressed in this commentary belong solely to the author. Read more from As Equals here and read our FAQs for information about how the series is funded and more.

Every time I learn about unjust acts of inhumanity, it triggers an intense and overpowering sense of rage followed swiftly by an equally intense and overwhelming sense of powerlessness as my instinct to help is challenged by the question: "But, what can I do?"
Examples of injustice and inequalities, whether it be the 2012 Delhi bus rape and murder; the ethnic cleansing of Rohingya Muslims in Myanmar; the use of deadly force at anti-police protests in Nigeria; the countless incidents of racial bias that led to many more Black people being fatally shot by the police in the US; the horrifying scenes of bodies washing up on Europe's beaches and the response to it that has been described as "brutal"; or the humanitarian crises in Yemen, Sudan, Syria, to name but a few -- all make my blood boil.
My entire life is a protest against injustice. As a lawyer, political and women's rights activist, I have been unapologetically vocal and visible both publicly and privately. But I too have felt a deep helplessness at what seems to be increasing atrocities and man-made humanitarian disasters.
It can be frustrating at best, and completely destabilizing at worst, to think that the injustice you have just witnessed, read about or heard of is beyond your power of influence or outside of your control to stop.
Like me, many of us tend to think first of what we cannot do before taking a deep breath to consider what if any action we can realistically take. "If only I had the money, means, influence, power and control to do something," I think to myself.
Read More
But over the years I've learnt to silence this voice of self-doubt because an invaluable lesson from my activism and advocacy journey, is that fixating on what I can't do denies me the ability to see what it is I can do with the means, influence, money and/or control I have right now.
I have come to understand that I need to change the way I define taking action.

The situation in Tigray

On March 20 2021, I watched CNN's ground breaking report into the genocide of Tigrayans and the use of rape as a weapon of war against Tigrayan women. The war felt so far away, beyond my control, yet the pain and suffering of Tigrayan refugee women, raped and sexually violated, felt so close. No words can describe my rage and the deafening helplessness I felt at what was happening under the world's nose, on our watch and in our time.
But a few hours later, a friend -- Naomi Campbell -- who had watched the same report messaged me, asking that all important question: "What can we do to stop this?" Her words helped me clear the cobwebs from my head and shift my focus from what I couldn't do to what I could.
Then things started moving quickly. I remember saying I knew the CNN reporter, Nima Elbagir, and I'd reach out to her. Within a couple of days of speaking with Nima, she'd introduced me to and I'd spoken with Dr Tedros, the incredible doctor helping the Tigrayan survivors of rape and sexual violence, about what real-time, on the ground support was needed to help these women at the refugee camps on the border of Sudan.

Fast forward a week or so, and we have organized a fundraiser to set-up and maintain a psychosocial peer support clinic for the survivors; to acquire medical and other supplies; and to launch a business start-up fund for rape/sexual abuse survivors looking to start a business.
In addition to this, I had reached out to Members of Parliament to seek their assistance in raising this as an important issue, so that the UK government can put pressure on the Ethiopian government to end the genocide of Tigrayans. None of this could I have imagined when I was stuck in the numbness of what I can't do.

If we accept that we are all global citizens co-existing with an ever-increasing global crisis of stark inequality, inhumanity and suffering, then we must acknowledge that real solutions can only come by active global citizenship.
It means we can't treat injustice and atrocities as local or national issues but as global issues without borders. It means our ability to take action should not be limited to or defined by where we live, our ethnicity, nationality, wealth, physical ability or faith. It should be determined by who we are, the conviction for our cause and the courage to take action even when we are unsure we'll succeed. In the words of Barack Obama: "A change is brought about because ordinary people do extraordinary things".
She's on the frontline of a rape epidemic. The pandemic has made her work more dangerous
Experience has taught me that 'extraordinary' means different things for different people and that's a good thing. From writing letters to the authorities; picking up a phone to make calls; taking a stand or refusing to be silent; donating time and/or money, or using your voice, skills and influence --all of these actions are extraordinary when one is intentional and resolute.
But here's another important lesson I've learned: understand that you cannot do everything for everyone. I a