When he pictures the sight of a triple jumper traveling through the air, Will Claye’s mind turns to music.

“It looks like the person is just floating – there’s a cadence to it and there’s a rhythm to it,” Claye tells CNN Sport.

“I feel like triple jump is one of the more artistic-looking events … it kind of just flows.”

It’s an appropriate choice of words for someone who divides his time between athletic tracks and music tracks. A two-time Olympic silver medalist in the triple jump, 29-year-old Claye is also a recording artist who has started his own record label, Desert Water Records.

On top of his athletic aspirations – which, right now, involve preparing for the Tokyo Olympics – Claye also dreams of performing his music around the world. His love for song-making runs deep, dating back, he thinks, to before the moment he fell in love with track and field.

“Music is my love language, you know?” he says. “That’s why I can’t really shake creating it. I literally get chills when I make certain songs … it’s something that I want to share with the world. I want to be one of the biggest artists ever.”

READ: Olympic swimmer Katie Ledecky on training in a backyard pool and her aspirations for Tokyo 2020

Claye, who also has his own fashion label, featured in YG’s “IDGAF” in 2013 – the video for which has accrued nearly 70 million views on YouTube and includes the triple jumper wearing his Olympic medals.

In terms of the artists he hopes to emulate, Claye lists Drake, Kendrick Lamar, Nipsey Hussle and Dr. Dre.

“I want to be on that type of level, music-wise,” he says. “And I think because I’m an athlete, people kind of overlook that.

“They think that I’m doing it just because I can as a hobby. But it’s not really a hobby for me. It’s something that really is from my soul.”

Last year, following the postponement of Tokyo 2020, Claye combined his love for music and athletics into “Dreams Don’t Die” – a song that reflects on how athletes were forced to put their Olympic dreams on hold.

It includes lines such as “four years straight, my eye’s been on the prize,” “it’s a lesson when dealing with father time,” and the refrain “dreams don’t die, they just multiply”; the accompanying music video is a montage of Claye and other athletes training and competing. 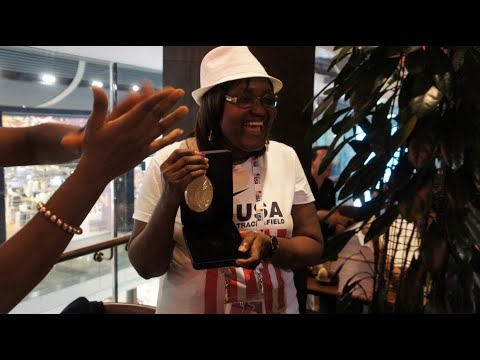 READ: How a husband and wife navigated the ‘purgatory’ of a postponed Olympics

“That was really how I was feeling, and it was something that I knew all Olympians were feeling,” he says.

“This dream that we have – to be an Olympian, to be an Olympic medalist, to represent our countries, to go out and just lay it all on the playing field – is something that we dream of. We dream of those moments.

“It almost seemed like the dream was just denied … but for it to be postponed – you know, you got to keep that energy up.”

And keeping up his energy is exactly what Claye has done.

“This will be the first Olympics that I’ve had five years to prepare for,” he says, adding that he feels this is “one of the best Olympic buildups I’ve ever had.”

Tokyo 2020 gets underway on July 23 and Claye will be hoping to win his first gold medal after twice finishing runner-up in the triple jump to countryman Christian Taylor.

Having ruled out the prospect of a proper indoor season amid coronavirus restrictions, his focus is now on competing at meets in Southern California in April before preparation begins for the Olympic trials in June.

Beyond that, he hopes to be able to travel overseas for competitions ahead of Tokyo.

The Olympics are an event Claye holds dear, not only because of his medal-winning success, but also because he proposed to his wife, fellow Olympian Queen Harrison-Claye, at Rio 2016. The couple held an engagement ceremony in Sierra Leone, where Claye’s parents are from, before getting married in California in October 2018.

“The feeling of me proposing was a better feeling than me being on the podium, honestly,” he says. “That’s something that will forever be a memory in my and my wife’s lives.”

READ: Sprinter Yohan Blake says he would rather miss Olympics than get Covid-19 vaccine

This year’s Olympics will likely be a more subdued affair for Claye compared to when he was encircled by a mass of spectators during his marriage proposal in Rio.

Organizers say that the possibility of overseas fans being able to attend this year’s Games will become clear by the end of March – a decision likely to affect field athletes more sharply than other Olympians.

This 118-year-old woman is set to break Olympic record

Jumpers might spend more than an hour and a half out on the track during competitions, relying on the energy of the crowd to fuel their performance. But Claye remains undaunted by the prospect of a Games with few fans.

“As an entertainer, I would like the crowd to be there,” he says, “but I don’t really think it dictates my performance. I’ve had big jumps when there was no one in the stadium.

“I know that people will be watching from the comfort of their homes so I’m going to put on a show for them.”

In Tokyo, Claye could achieve the rare feat of winning medals at three separate Olympics; this time, however, he hopes to strike gold.

“That’s the goal … that’s what we train for,” he says. “If this kid from Phoenix, Arizona, was able to do that, I think that would be a pretty cool thing for the world to see.”