He clung to a tree for hours to escape death in Japan’s worst natural disaster. Ten years on, he’s still rebuilding his life

Kenichi Kurosawa clung precariously to a tree as the water rose around him, entirely flooding the roads below.

For almost six minutes on March 11, 2011, a 9.1 magnitude earthquake – the worst to ever hit Japan – struck 370 kilometers (230 miles) northeast of Tokyo, triggering a huge tsunami that crashed into Ishinomaki, the coastal city Kurosawa had lived in his whole life.

Minutes before waves up to 10 meters (nearly 30 feet) high swept in, Kurosawa, then aged 40, had scrambled 3 meters (10 feet) up a pine tree, wrapped his legs around a branch and hung on for his life.

“I felt like the ocean was all around me. The water was so cold it chilled me to the bone,” he recalls.

As the water came up to his knees, Kurosawa saw people in cars gripping their steering wheels as their vehicles were washed down the road. Others who had been hanging on to trees felled by the waves were swept away. For hours, Kurosawa endured sub-zero temperatures. He thought of his wife – he’d reached her on her cellphone for 15 seconds while in the tree, before the line went dead.

As night turned to day, he heard someone in the distance calling for help with what seemed like their last ounce of energy. He says he doesn’t know that person’s fate – but Kurosawa had just survived the deadliest natural disaster in Japanese history.

More than 20,000 people died or went missing in the earthquake and subsequent tsunami. But the devastation went deeper than natural disaster. The Fukushima Daiichi nuclear power plant, in this part of Japan, became a catastrophe of its own.

Within 50 minutes of the first quake, the tsunami waves crested a 10-meter (33 feet) sea wall intended to protect the nuclear plant. As the water swept in, cooling mechanisms failed, melting fuel in three reactors and spewing deadly radioactive particles into the surrounding area, which have since dispersed and decayed to less-dangerous levels.

This year, ceremonies to mark the disaster’s tenth anniversary will be low key and socially distanced amid the coronavirus pandemic. In Tokyo, Prime Minister Yoshihide Suga, Emperor Naruhito and Empress Masako will attend a memorial, pausing for a moment of silence at 2:46 p.m., the exact time the earthquake struck 10 years ago.

Despite the destruction wrought, many survivors have rebuilt their lives and communities, but for many the legacy of the disaster will forever remain.

Ishinomaki, the second largest city in Miyagi prefecture, was one of the worst-hit communities by the tsunami. Waves covered almost 5 square kilometers (500 hectares) of land and inundated nearly 15% of the city, according to the International Tsunami Information Center.

The tsunami destroyed more than 50,000 homes and buildings in Ishinomaki alone, obliterating a vibrant city center and most of its seaport and infrastructure. Nearly 3,100 people in the city lost their lives.

Kurosawa, a plumber, was working in a neighboring town 12 kilometers (7.5 miles) from his city when the earthquake struck. He called his wife, who was sheltering in a bank, and told her to meet him at their home.

Minutes later, a tsunami warning was issued. He tried calling his wife again, but the phone lines were dead. Worried for her safety, Kurosawa jumped into his car and sped home to meet her so they could head to higher ground together. Cars raced past him in the opposite direction, making their way to established evacuation zones in the earthquake-prone country.

As he neared his home, he spotted what looked like tsunami barriers in the distance. When he got closer, he realized they were cars – swept away by waves, bobbing up and down.

As he made a desperate U-turn, he glimpsed a man trying to escape the incoming water on foot. “I pulled him into the car through the window, and we sped away from the water. But by then, the tsunami was ahead of us, too,” Kurosawa says.

Soon sandwiched by the waves, the pair ditched the car and ran to find shelter.

As Kurosawa scrambled up the tree, a branch broke, and he fell onto the embankment. Kurosawa hoisted himself back up the tree just as the waves swept in. The man he’d rescued did the same. “I almost thought I wouldn’t make it,” he says.

“It’s hard to imagine the power of a tsunami unless you’ve experienced it – it’s a destructive force that just swallows everything up and obliterates everything in its path.”

As the tsunami swept further inland to neighboring Fukushima prefecture, the Daiichi nuclear plant was melting down.

Japan declared a nuclear emergency on March 11, 2011 for what became the worst such disaster since the 1986 Chernobyl incident. More than 300,000 people living near the Daiichi nuclear plant were forced to temporarily evacuate, according to the Red Cross. Another 50,000 people moved out of the irradiated areas voluntarily.

In the following months and years, parts of the area around Fukushima became ghost towns, visited only by Tokyo Electric Power Company (TEPCO) officials, safety inspectors and tourists seeking a dark thrill. Since the disaster, TEPCO has been pumping hundreds of tons of water into the nuclear plant to cool the reactors and stop the outflow of radiation.

The cleanup from the disaster is expected to take decades and cost billions of dollars. More than 35,000 people remain displaced, 10 years after the original meltdown, according to the Fukushima authorities.

Hajime Matsukubo, a spokesperson from the Citizens’ Nuclear Information Center in Tokyo, an anti-nuclear public interest organization, says the regions hit by the earthquake and tsunami have mostly recovered. However, the recovery work around the Fukushima Daiichi nuclear plant has remained at a standstill since the meltdown, as despite the large amount of money spent, the population around the area has halved since 2010. “After 10 years, what we have learned is that once a nuclear accident occurs, the cleanup is tremendously difficult,” he said.

Currently, TEPCO is storing over a million metric tons of water used to cool the reactors in huge tanks at the plant. But storage space is fast running out and authorities, including the country’s environment minister, have indicated the only solution is to release it into the ocean – a plan facing opposition from environmental campaigners and fishing industry representatives. 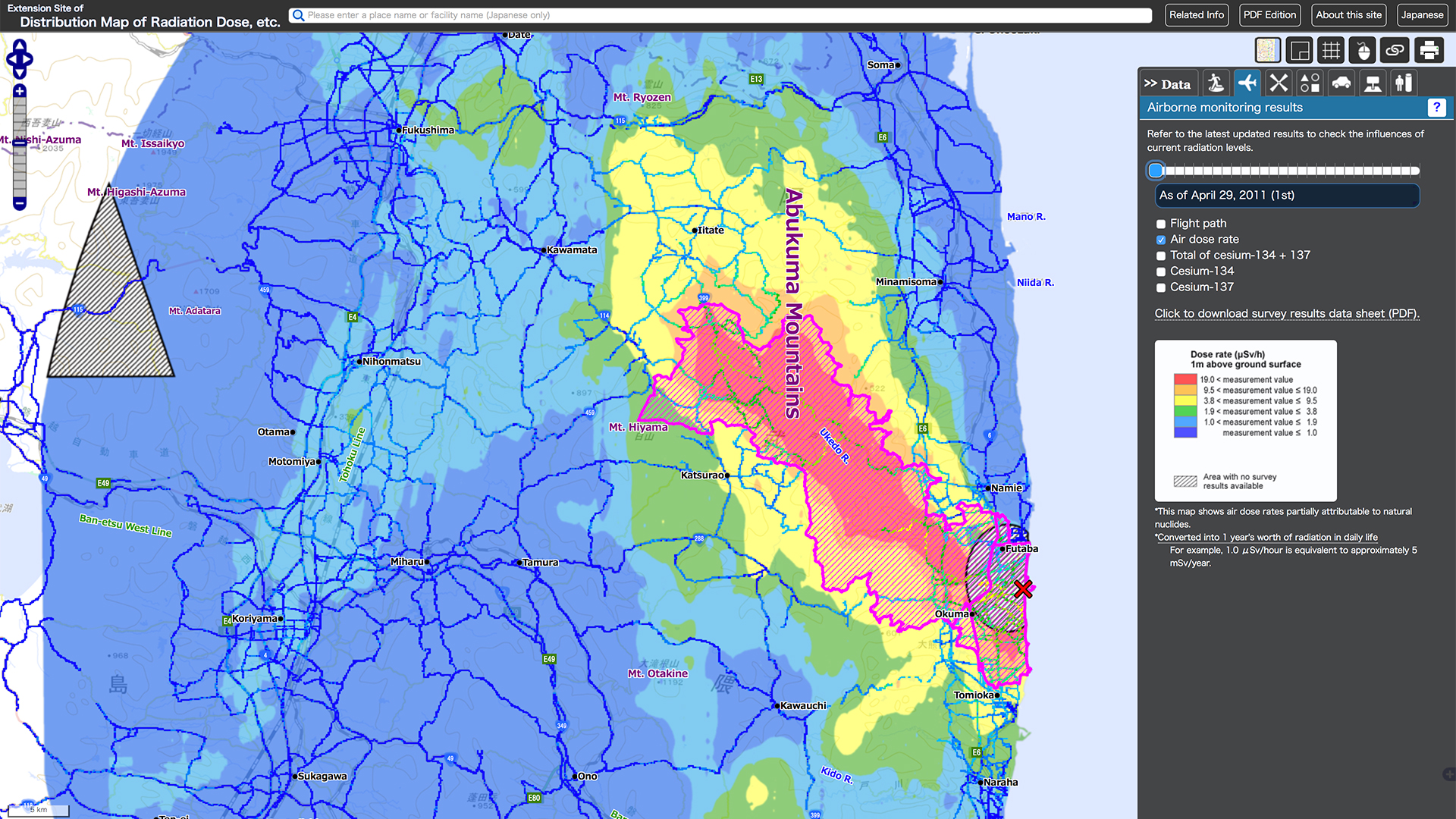 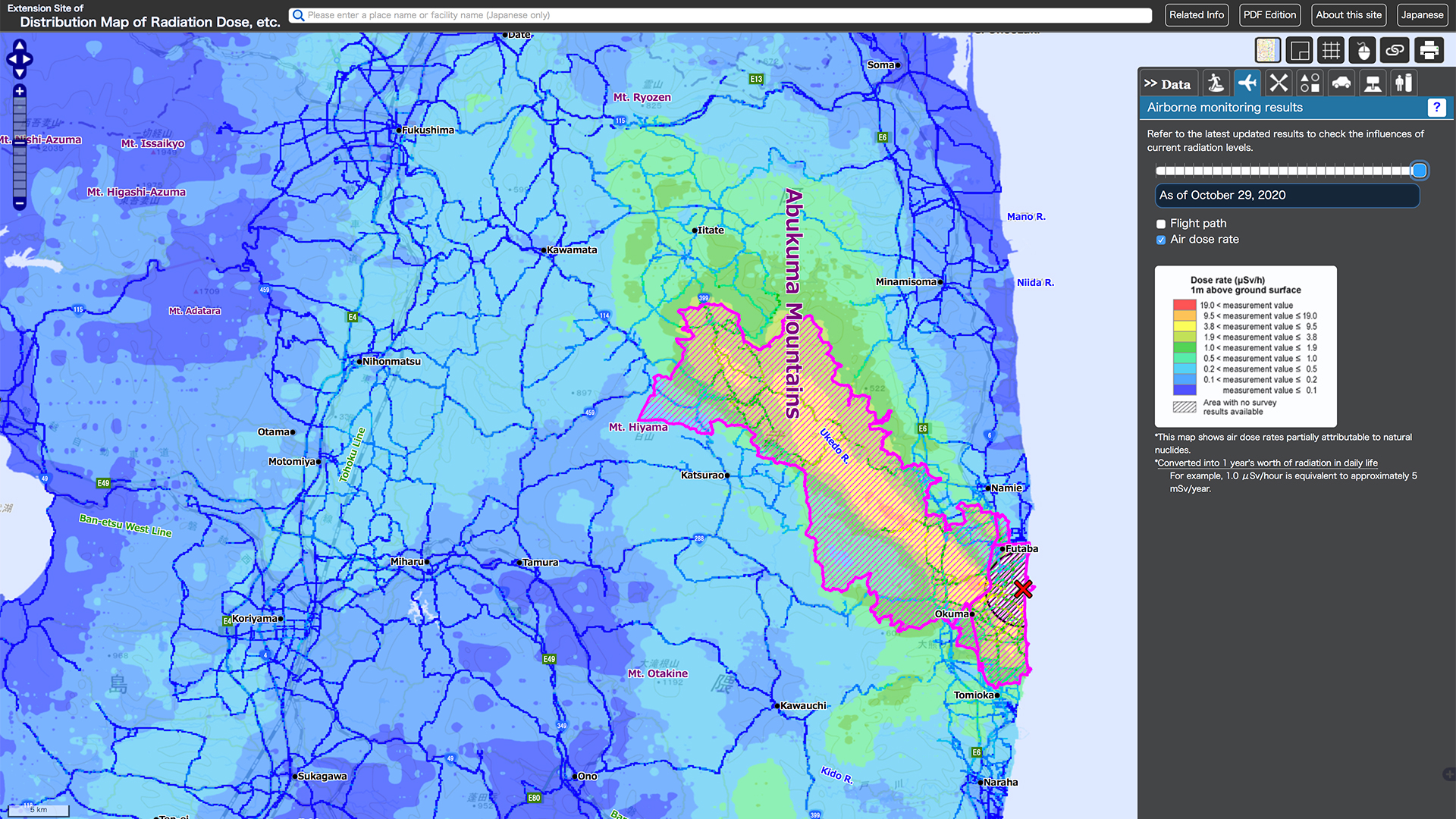 How radiation levels have decreased over ten years in Fukushima.

In 2014, the Japanese government began lifting evacuation orders for zones with annual doses of radiation below 20 millisieverts – the maximum exposure recommended by international safety watchdogs, and the equivalent of two full-body CT scans.

As of March 2020, only 2.4% of the prefecture remains off-limits to residents, with even parts of that area accessible for short visits, according to Japan’s Ministry of Environment.

However, despite the decontamination efforts, a 2020 survey conducted by Kwansei Gakuin University found 65% of evacuees no longer wanted to return to Fukushima prefecture – 46% said they feared residual contamination of the environment and 45% said they had settled elsewhere.

Fukushima also shook Japan’s long-stated commitment to nuclear power. Prior to the disaster, the country’s 50 or so reactors provided more than 30% of its power, according to the World Nuclear Association, an industry body.

This ended on May 5, 2012, when the country’s last operating reactor, in Hokkaido, shut down for inspection, leaving Japan without nuclear power for the first time in more than 45 years. (Two units of the Oi nuclear power plant were briefly restarted in 2012, but went offline again a year later.)

Following the nuclear meltdown, countries such as Germany vowed to shutter all nuclear reactors by 2022. But 10 years later, experts in Japan are divided on the use of the technology, which is better for the environment than burning fossil fuels, while the public’s anti-nuclear stance has slowly waned.

In August 2015, a reactor was restarted in Sendai, in Kagoshima Prefecture, on the southern island of Kyushu.

On the morning of March 12, Kurosawa climbed out of the pine tree. It looked like a bomb had wrecked his city.

As he made his way home, he waded through the debris, dodging parts of wrecked boats that had washed ashore. Half-collapsed buildings were submerged in water, and he struggled to breathe the smoke-laden air.

Kurosawa’s wife was alive, having been evacuated to a school on higher ground. But overnight, they’d lost the friends and physical markers that made up their lives.

For the next six months, Kurosawa and his wife lived in rented homes and their friends’ offices. In August 2011, they moved into temporary disaster housing, a prefabricated building they called home for over three years. Kurosawa put his plumbing skills to use, volunteering to help his local community with odd jobs. He still lives in Ishinomaki.

“I went from having a normal routine to having an abnormal one that became the new norm. One year, two years passed – the abnormal reality returned to normal,” says Kurosawa. For five years, he had dreams at night of walking through the wreckage of his hometown.

Today in Ishinomaki, Kurosawa says people’s feelings toward nuclear power in the region remain just as mixed as each person’s experience of the tenth anniversary of the disaster.

Kenichi Kurosawa (center) and his friends draw the words "Ganbaro!" or "hang in there" on a billboard lit up with car headlights in Ishinomaki, Miyagi prefecture on April 10, 2011.
YASUYOSHI CHIBA/AFP/Getty Images

“People ask me how I feel now it’s been 10 years. I still feel like I’m living on that extended timeline and trying my best,” he says.

Over the years, Kurosawa has fought to rebuild his life, business and community. Today, coastal embankments close to 10 meters (33 feet) in height extend for about 56 kilometers (34 miles) along the coast to protect his city from the ocean. New public residences have sprung up on the city’s outskirts, while others are still being rebuilt.

Kurosawa says people’s emotional scars take just as much time to heal as their built environment. But, he says, there is no point living in the past. Today, Kurosawa plays an active role in teaching others about disaster preparedness and keeps moving forward.

“One thing I learned from this disaster is that people need to live among each other. I think the hope lies in us,” he says.

Sometimes, he drives past the tree that saved his life. He even tried once to reclimb it.