How TikTok made ‘WandaVision’ must-see TV

The finale of “WandaVision” premiered Friday, bringing to an end a successful season for Disney+’s first Marvel Studios series — and with it, a parallel drama that has been unfolding on TikTok. For weeks, fans have taken to the short-form video app to theorize about the show’s many mysteries, creating countless videos of themselves talking, singing and making memes about the show.

There are videos about fan theories, clips that point out hidden details that connect to the Marvel Cinematic Universe and, of course, plenty of what TikTok creators do best: dancing. The show has many jingles, none more catchy than the most villainous bop around, “Agatha All Along” — the “Munsters”-esque theme song for the show’s main antagonist, Agatha Harkness.

Not only are they easily digestible content, these fan-made clips also act as advertisements for “WandaVision.” Their 15- to 60-second TikTok videos are the type of grassroots marketing and organic buzz that’s valuable to streaming services like Disney+.

With an overabundance of content online, streaming companies have to find a way to stand out among an ever-growing list of services. A stockpile of fan-made social chatter about “WandaVision” helped to keep the show in the pop culture consciousness as it rolled out new episodes every Friday.

It also likely served a greater purpose for Disney+: it made those who weren’t watching feel like they had to sign up in order to get in on the conversation.

BEST OF TIKTOK | ITS BEEN AGATHA ALL ALONG | HOW LONG CAN YOU LISTEN? 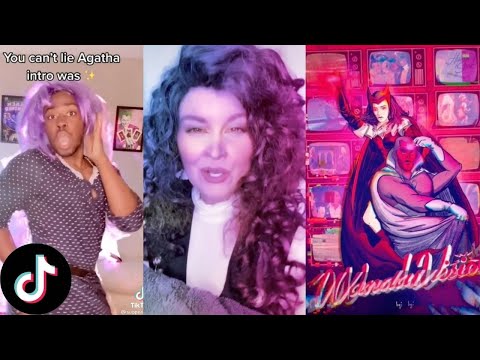 TikTok has repeatedly shown it can help shape not just online culture but offline culture, influencing what people eat (baked feta pasta), what they listen to (“Drivers License”) and potentially now with “WandaVision” what shows they watch.

“Traditional forms of marketing can never compete with a recommendation from a friend,” Suzanne Scott, an associate professor at the University of Texas Moody College of Communication, said.

“Fans’ organization on social media, and the memes that emerge from fan culture, help to cultivate a feeling that there is something happening in culture that you don’t want to miss out on,” she added.

And when it comes to TikTok, there’s plenty of talk about the suburban adventures of Avengers Wanda Maximoff and The Vision. According to the company, the hashtag “#WandaVision” alone generated more than 310,000 videos and a whopping 2.4 billion views on the app since the series debuted in January.

“TikTok is the virtual watercooler where everyone connects to share their favorite moments, memes, and theories on what will happen next,” Lizzy Hale, TikTok’s senior manager of content, told CNN Business. “TikTok has become the dynamic version of the old school TV recap columns.”

Now, “WandaVision” didn’t need any help standing out. It was a highly anticipated TV series from Marvel Studios — Hollywood’s biggest blockbuster brand — for Disney+, a service with roughly 95 million members. But TikTok helped supercharge the show’s buzz and ensured it would dominate online discussion in a crowded market.

Kathryn Hahn's Agatha Harkness got a villanious bop, "Agatha All Along," that proved popular on TikTok.
Marvel Studios 2020

There’s nothing new about fans obsessing over TV shows.

“Twin Peaks,” “The X-Files,” “Lost,” “The Walking Dead,” “Game of Thrones” and Disney+’s other streaming hit “The Mandalorian” infatuated many viewers. Some of those shows were broadcast in the earliest days of online chat and fan-devoted communities.

TikTok also isn’t the only place viewers can go to talk about their favorite shows. Reddit, YouTube and Twitter (TWTR) have all been turned into vibrant fan forums for shows.

But “Wandavision,” with its twisty mysteries and crazy cliffhangers, is perfectly suited for the social media age and especially for TikTok, which is a “fertile space for fandom to flourish,” according to Brett Bumgarner, a media and entertainment analyst at research firm Magid.

With 'WandaVision' and 'The Mandalorian,' Disney+ has found its magic spell

And that’s exactly the type of engagement that streaming services want.

Netflix (NFLX), Disney+ and other services are all vying for consumers’ time and subscription dollars. In order to bring in new customers, these services need extensive content libraries that include TV shows and films people are talking about in real life and online.

“‘WandaVision’ has the advantage of being part of a highly popular franchise, but others can benefit from such intricate world-building,” Bumgarner said. “The shows with the most engaged audiences — ‘WandaVision,’ ‘The Mandalorian,’ ‘The Umbrella Academy,’ even ‘The Crown’ — all have rich, intricate worlds for audiences to get lost in.”

“Finales satisfy absolutely nobody ever”

Elizabeth Olsen as Wanda Maximoff and Paul Bettany as Vision took a trip through decades of TV on the Disney+ series.
Marvel Studios 2020

In the end, you may not know the difference between Scarlet Witch and the Wicked Witch of the West. Still, if lots of people are talking about the show the chatter just may get you to sign up for Disney+ — the focal point of Disney’s media empire right now.

“An engaging show is one of the strongest weapons to have in the streaming wars,” Bumgarner added. “And world-building helps you get there.”

It also helps that “WandaVision” is a streaming series that follows the traditional TV schedule by premiering a new episode weekly as opposed to the Netflix binge model, where an entire season is released simultaneously. This allows the show to build anticipation each week while giving fans more time to to delve into new episodes.

But there is a down side to fans getting lost in these fictional worlds.

According to Matt Roush, the senior television critic at TV Guide Magazine, creating countless theories and storylines on social media may lead to some fans being disappointed with how the series actually comes to a close.

“Finales satisfy absolutely nobody ever. Think about ‘Lost,’” Roush said. “There’s no way to end a show that people like as much as watching the mystery build.”

So even though social platforms like TikTok can build up a streaming series like “WandaVision,” the show’s actual resolution can end up creating a backlash from fans — especially those, who like Wanda herself, created worlds of their own.