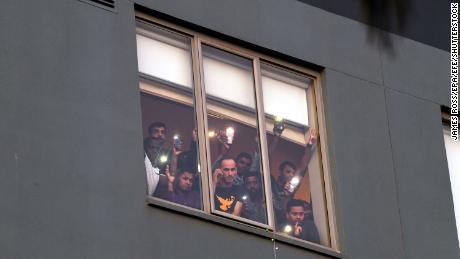 Refugees at the Mantra Hotel before they were moved to a new hotel used as a detention center.

Australia vowed to never let these men settle on its soil. Some just got visas

For years, the Australian government had vowed never to allow asylum seekers like Bandesh, who had been processed on offshore immigration centers in Papua New Guinea and the Pacific nation of Nauru, to settle on its soil.
Now, suddenly Bandesh, and six others, were free in Australia.
"I was just shocked, I didn't know what to do," said Bandesh, a Kurdish refugee who fled Iran seeking safety Australia. "There is no more headcount, there is no high security, there is no fences. Wow."

The moment a person walks free after 8 yrs

Thankyou to all for raising your voices

And to whomever signed the form

8 years too long, and 500 remaining here and offshore who deserve nothing less. Please sign theirs

Their release has given hope to other detainees.
Read More
"I am very happy for him," said Bandesh's friend and onetime roommate Mostafa Azimitabar, who remains detained in a Melbourne hotel with around 60 other men brought to Australia from PNG and Nauru for urgent medical treatment. "His happiness helps me not to give up."
Australia's Home Affairs department has declined to comment on the freed men, but their lawyers say they all had upcoming court hearings when they would argue they were being unlawfully detained.
<div class="zn-body__paragraph" data-paragraph-id="paragraph_DC6EAB4D-EBB3-C