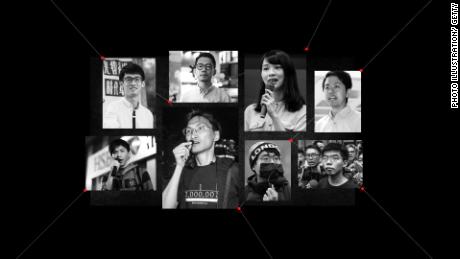 The exiles and the inmates: The heart-wrenching hand dealt to Hong Kong's democracy activists

Hong Kong and London (CNN)In the dark small hours, two recurring nightmares terrorize the sleep of Eddie Chu. In the first, he is lost overseas and cannot get home to Hong Kong. In the second, the former lawmaker is day tripping with his nine-year-old daughter.

The latter scenario might not sound nightmarish, but democracy activist Chu, 43, knows what it symbolizes: his dread of being separated from his daughter if he eventually goes to jail. The first embodies his other major fear: being exiled from Hong Kong.
As a global pandemic brought life in many cities to a halt this year, the ground beneath Hong Kong shifted at an astonishing speed, courtesy of sweeping legislation imposed by Beijing in June that outlawed opposing China in any form, on any platform, anywhere in the world.
Pro-democracy activists Eddie Chu, Joshua Wong, Owen Chow and Lester Shum distribute leaflets in support of 12 activists who tried to flee to Taiwan.