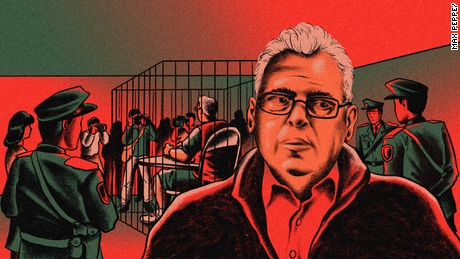 Peter Humphrey was once locked up in China. Now he advises other prisoners and their families how to take on Beijing

Hong Kong (CNN)When they brought him his passport, Jeff Harper thought he was getting out.

He stared at the document, its navy cover embossed with the United States seal, as it gradually dawned on him that the Chinese police officer, in his broken English, was describing something quite different.
"He said something about a residential surveillance house," Harper said. "I had no idea what that was."
It was early January 2020. Harper, a 6-foot, 8-inch (203 centimeter) professional basketball player, had arrived in the southern Chinese city of Shenzhen, hoping to land a new contract after playing in Norway, Japan and a host of other countries.
Harper had been in China for less than a week when everything went wrong. Walking back from a comedy show with a friend in the early hours of January 7, he said he saw a violent altercation between a man and a partially clad woman on the street and ran over to help.
Read More
According to Harper, he pushed the man out of the way, causing him to fall to the ground. The man then left the scene, Harper said. He and his friend checked that the woman was OK, were told she was, and Harper returned to his hotel.
Hours later, police turned up at his door. In the intervening hours, the man he'd shoved had turned up in hospital, they said, and was now in a coma.
Harper texted his girlfriend back home in Boise, Idaho: "I'm in some trouble."
<img class="media__image media__image--responsive" alt="A still from a smartphone video Jeff Harper took while in detention in Shenzhen, China, in early 2020." data-src-mini="//cdn.cnn.com/cnnnext/dam/assets/201030105339-jeff-harper-video-still-shenzhen-2020-small-169.jpg" data-src-xsmall="//cdn.cnn.com/cnnnext/dam/assets/201030105339-jeff-harper-video-still-shenzhen-2020-medium-plus-169.jpg" data-src-small="//cdn.cnn.com/cnnnext/dam/assets/201030105339-jeff-harper-video-still-shenzhen-2020-large-169.jpg" data-src-medium="//cdn.cnn.com/cnnnext/dam/assets/201030105339-jeff-harper