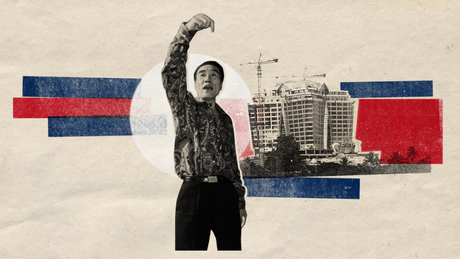 Is an alleged drug kingpin from China investing millions in a port in Laos?

Hong Kong (CNN)On October 6, news of a $50 million dollar investment to build a port in the Laotian town of Ban Mom led the business section of the Vientiane Times, a prominent state-run newspaper. In the second paragraph, readers were told that a man named Zhao Wei participated in a groundbreaking ceremony for the project.

What they weren't told is this: According to the United States, Zhao is one of the world's most notorious narcotics traffickers.
The US Treasury Department accuses Zhao of running a global criminal organization involved in child prostitution, the illicit trade of wildlife including tigers, rhinos and elephants, and drug trafficking -- all from his private corner of Laos.
Zhao's company, the Hong Kong-based Kings Romans, manages a 100-square-kilometer (39-square-mile) swathe of land in the country's northwest, called the Golden Triangle Special Economic Zone (GTSEZ). Zhao is the chairman of the GTSEZ, which was named after the historically lawless border region where Laos, Myanmar and Thailand meet. For years, the Golden Triangle was the world's largest source of heroin. Now it pumps out an estimated tens of billions of dollars worth of synthetic drugs annually, according to the United Nations Office on Drugs and Crime (UNODC).
Hong Kong corporate records show Zhao is the majority shareholder of Kings Romans. Both Zhao and Kings Romans were sanctioned by the US government in 2018 for their purported role in the narcotics trade and other alleged crimes -- meaning he was barred from using the US financial system, and any funds he holds in US banks likely would have been frozen as well.
<div class="zn-body_