Two months after he was booted from “Saturday Night Live” for partying during the pandemic, Morgan Wallen and SNL made light of his bad judgment in a time-traveling skit on Saturday’s episode.

Wallen, the country singer, had initially been scheduled to perform as the musical guest in an October episode of the NBC show. But a Tik Tok video that week showed a man identified as Wallen drinking and kissing a woman at a bar surrounded by people not wearing masks or social distancing.

He later said he got a call from SNL disinviting him from that week’s show for violating Covid-19 protocols, and he apologized, saying his actions were “pretty shortsighted.”

Wallen returned to the show on Saturday’s episode to perform songs “7 Summers” and “Still Goin Down,” and he also appeared in a skit as himself set the night of that party. 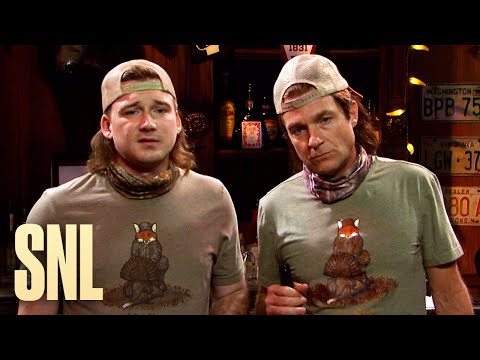 In the bit, a beer-holding Wallen bursts into a bar wearing the same outfit as he did in the Tik Tok video, and yells “To no consequences!” A woman played by Chloe Fineman asks to kiss him and film it, and he agrees, but “only if you promise not to post it on social media.”

“OK, just on TikTok, I promise,” she responds.

The episode’s guest, Jason Bateman, then arrives to the bar as Wallen from the future – wearing the same outfit – to try to get him to leave.

“I am you from the future and I came back here to stop you from partying tonight,” Bateman says. “Someone’s gonna post a video of you ignoring Covid protocols, and the whole internet is gonna freak out.”

“I just specifically asked her not to post it,” Wallen says.

'SNL' returns with 'Rudy Giuliani' and his witnesses contesting the election

“I know, I thought it was an air-tight approach as well, but once people hear about the party, you’re in big trouble, man. You’re gonna get kicked off ‘Saturday Night Live,’” Bateman says.

They agree that Lorne Michaels, the creator of SNL, won’t mind, but “the execs at NBC, they’re gonna force his hand, bro,” Bateman says.

“I don’t want to screw up an opportunity like that, or let my fans down. I guess I oughta leave this party then,” Wallen says.

Bateman says he’s actually Wallen from one month in the future, and SNL cast member Bowen Yang then arrives as a version of Wallen from two months in the future to further warn him to leave the party.

Finally, Wallen gets the message, and he sings a new song he calls “Focus on the Future.”

“So let’s all raise a glass up, and I’ll thank you in advance, for giving this poor Southern boy a second Yankee chance,” he sings.