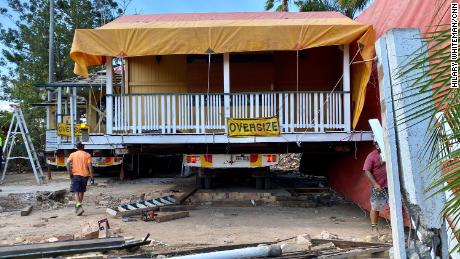 The house was cut into three pieces, each around 30 meters long and eight meters wide.

For these Australians, moving home means sawing up a property and driving it hundreds of miles away

Workers had spent two days sawing the house's timber frame into three pieces 30 meters (98 feet) long and 8 meters (26 feet) wide, so it could be moved from Bald Hills, an outer suburb of Brisbane, to a town 170 kilometers (105 miles) away -- and reassembled for new owners.
Two bedrooms and the reception room were strapped on to one truck, with the dining room, a third bedroom and the living room on the other. The sun room and kitchen would follow later.
Usually it is homeowners who move, not houses. But in the state of Queensland, at least 500 properties were moved last year, according to estimates from several companies.
The house wobbles as it goes over a traffic island. Credit: Hilary Whiteman/CNN
Most, like Number 36 -- as it was known before the move -- are Queenslanders.
Read More
Named after the Australian state, these timber properties, typical at the turn of the 20th century, were built on stilts to let the humid summer air flow beneath them.
Queenslanders fell out of fashion in the 1930s, when homeowners started to look to the US and Europe for art deco and Spanish mission-style brick homes. But in recent years, the classic local design with its wide verandas has become highly sought after.
But buyers often can't -- or don't want to -- live in the homes in their original locations, and so are taking the extraordinary step of cutting up and moving them. It's relatively affordable to move a Queenslander, due to their timber design, and trying to replicate the style in a new build misses the point.
"People who live in one of these won't build a new house," said John Wright, who has been relocating Queenslanders for 40 years. "No walls are ever perfectly level and straight, and they certainly have a classic sort of character to them."
Experts say the trend is both a boon -- it is preferable to the properties being demolished -- and a loss for conservation: it divorces the properties from their past.
Local historians say each time a Queenslander is moved, leaving behind an empty plot or making way for a new development, the character of a suburb subtly changes.
And, the stories of each home like Number 36 become harder to find.
Photos: Inside Number 36
The interior of Number 36 was from another era. Patterned carpet clashed with embossed wallpaper and the previous owners' love of embellishment had even spread to the ceilings. Alan Brough painted the white plaster, and spent decades touching it up, according to his son Dean.
Hide Caption
1 of 8
Photos: Inside Number 36
The formal lounge seemed to have been frozen in time. In the corner was an old Mason & Hamlin pump organ. Dean Brough said it was another one of his father's impulse purchases, this time from a car show.
Hide Caption
2 of 8
Photos: Inside Number 36
When they learned that Alan Brough had made the copper kitchen cabinets by hand, the MacGeorges decided to incorporate them into their new kitchen design.
Hide Caption
3 of 8
Photos: Inside Number 36
A wooden antique phone hung on the kitchen wall. Dean Brough said there was another one downstairs -- the family used them like an intercom system.
Hide Caption
4 of 8
Photos: Inside Number 36
Queenslanders are notorious for being poorly insulated. Older homes had fireplaces to heat them in winter.
Hide Caption
5 of 8
Photos: Inside Number 36
The Broughs raised their two young sons in the house. It was sold in 2020, after Alan died.
Hide Caption
6 of 8
Photos: Inside Number 36
The MacGeorges fell in love with the house's painted ceilings -- white plaster in four of the rooms had been painted to complement the decor.
Hide Caption
7 of 8
<img class="media__image media__image--responsive media__image--cut-format" alt="The Broughs used every spare inch of the house to display their antiques and souvenirs bought on overseas holidays." data-src-mini="//cdn.cnn.com/cnnnext/dam/assets/201118233159-12-moving-number-36-small-169.jpg" data-src-xsmall="//cdn.cnn.com/cnnnext/dam/assets/201118233159-12-moving-number-36-medium-plus-169.jpg"