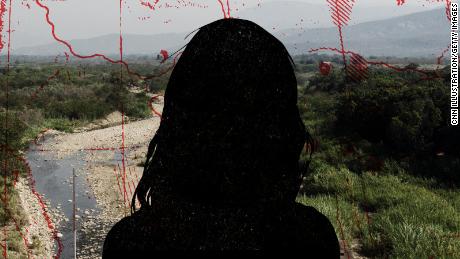 Muddy paths across the Táchira river can be the only way into Colombia -- but they're far from safe.

By Marta Martinez
Illustration by Will Mullery, CNN

CNN is committed to covering gender inequality wherever it occurs in the world. This report is a collaboration between CNN and The Fuller Project. It is part of As Equals, an ongoing series.

If Gabriela Ochoa had known what would happen to her down by the Táchira River that divides Venezuela and Colombia, she never would have crossed.
But her family was desperate.
The 21-year-old single mother had been struggling as Venezuela's economy collapsed under the regime of embattled President Nicolás Maduro. In 2019, she lost her job at a fruit shop and could no longer feed her three young children, all under the age of five.
With government subsidized food growing scarcer and more expensive, Ochoa didn't even bother seeking government aid. Instead, after a short stint living with her mother, with whom she had a troubled relationship, she set her sights on moving to Colombia, where people advised she might find work and a friend had offered to host her.
As the first Covid-19 cases started popping up at home, she traveled towards the Colombia-Venezuela border. Many Venezuelan migrants have been living in the city of Cúcuta, the closest major city on the Colombian side of the border, often in the precarious conditions of slums and temporary shelters.
Read More
Ochoa and her children made it to the border bridge in early April, after hours of hitchhiking and walking from her hometown, the coastal city of Puerto Cabello -- more than 450 miles (730 km) from the border. But the Colombian government had already closed all checkpoints to avoid the spread of the novel coronavirus in mid-March.
The only option left for Ochoa to make it across to Cúcuta was to cross through one of the nearly 80 muddy, crime-ridden trochas in the Cúcuta area -- informal routes across the Táchira river -- controlled by criminal gangs, guerrillas and paramilitary groups, she said.
On the first day, Ochoa said she begged people on their way to the trocha to help her cross, with no luck. That night, she slept on the street with her children, their stomachs roaring with hunger. By the end of the second day, as the sky darkened, a young man finally offered to help her, she said.
As they inched closer to the water, a group of men emerged from the bushes, their heads covered by hoodies.
"They had guns, knives, all kinds of things," Ochoa recalled. The men grabbed her children and threatened to take them away if she didn't pay them to cross.
"I thought they were going to kill me and the children," she said. In tears, Ochoa told them she didn't have any money and begged them to let them across the river. The men dragged her behind a bush and raped her.
"It was horrible," Ochoa said. "Thank God they didn't hurt the kids."

Beginning in mid-March, as Covid-19 infection rates grew exponentially in Latin America, the majority of countries in the region closed their borders to curb the spread of the virus. But such measures have put women at more risk, according to human rights groups, government officials and researchers.
For years, Colombia has received the bulk of desperate Venezuelans who cross the border to neighboring countries in search of food, medicine and shelter. Its government has provided medical aid, schooling and some job opportunities to fleeing Venezuelans. But the pandemic's border closure left no safe way for these migrants to cross the border, exposing more women to sexual abuse, kidnapping, trafficking and murder that is endemic along informal routes.
Since the start of the pandemic, humanitarian organizations say there has been a marked increase in gender-based violence along the border regions. The United Nations High Commissioner for Refugees (UNHCR) reports a 7% increase in the number of women staying in their three shelters in Cúcuta devoted to women victims of sexual violence, trafficking and single mothers, compared to the same period in 2019 (from April to August). Of the 257 women that UNHCR supported, the agency says nearly half had experienced gender-based violence.
But the rise in sexual and gender-based violence on the Colombia-Venezuela border predates the pandemic. In 2019, Profamilia, one of the main sexual and reproductive rights organization in Colombia, said they supported 573 Venezuelan women victims of sexual violence in their clinics—a 92% increase compared to 2018. The border regions of La Guajira and Norte de Santander, where Cúcuta is located, amassed the highest number of reported attacks.
What's driving Venezuelans to cross the border hasn't changed, said Lucía Hernández, a lawyer with the international organization Women's Link Worldwide. These include fear of violence, financial strain, and scant basic services due to the faltering economy. But border closures "doom migrants to irregular crossings."

More than 5,000 people are currently crossing in both directions through trochas daily, according to FundaRedes, a Venezuelan NGO monitoring human rights abuses in the border regions.
Since the border closed in March, homicides in Venezuelan border regions have increased by 28.7% compared to the same period in 2019 (April to June), the NGO reports. Disappearances have spiked by 83.3%, with the sharpest increases in Táchira, the border region closest to Cúcuta. The Fuller Project did not receive a response from Venezuelan border police about these increases.
"[Illegal armed] groups control the territory...They threaten women's integrity, often with the goal of sex trafficking or forced labor," said Javier Tarazona, director of FundaRedes. "Covid-19 has made the border context more oppressive, more violent."
Many Venezuelan women have been lured into Colombia with fraudulent job offers, and then forced into sex trafficking, according to a recent UNODC report. The number of foreigners trafficked into Colombia so far this year was already 20% higher as of May than for all of 2019, the report said. Over 90% of the victims were Venezuelan women.
Colombia's secretary of borders and cooperation in Norte de Santander, Victor Bautista, says the government was aware of the risk of exposing civilians to more violence by closing the border, but it didn't expect that the closure would last so long.
"Those most vulnerable are more exposed to human trafficking, abuse, sexual exploitation," he said.
When Ochoa finally made it to the Colombian side of the river, it was already dark. Her three children wouldn't stop crying. She was too afraid to go to the police and report what had happened to her. The men threatened to kill her if she told anyone, she said, and she couldn't accurately describe the men's faces. Even if she could describe the men, she explains, she worried the authorities might deport her for being undocumented.
"I'm alone here," she said. "I have no one to defend me."
Lack of legal status deters many Venezuelan and foreign women from seeking justice in Colombia. When women do report sexual violence and crimes committed at the border, these crimes are rarely investigated and prosecuted, according to local women's organizations.

In some cases, when abuses take place by the river, police say they cannot investigate a crime outside of Colombian territory. Many women do not trust law enforcement institutions, because members of the police and armed forces are often perpetrators themselves, several organizations and migrant women told CNN.
"When migrant women are abused, who do they turn to?" asked Adriana Pérez, director of the Gender Observatory in Cúcuta. "Generally they're told to go to the police...but what happens when it's a police officer who is abusing them? Or if it's armed groups, under the knowledge of the police?"
"These are not acts that are only being committed by illegal armed groups," she added. "And that's why it's so complex to address them, because institutional agents seem to be complicit."
The Cúcuta police told the Fuller Project they have only received one report of sexual violence since the pandemic border closure in mid-March, and are not aware of any cases involving law enforcement agents. Colombian authorities said they are taking measures to strengthen standards for reporting and identifying sexual and gender-based crimes. It's time to move from perception to formal complaints," Bautista said.
Colombian military authorities did not respond to the Fuller Project's request for comment.
Makeshift camps at the Simon Bolivar International Bridge in Cucuta, Colombia, on July 7 , 2020.
During the pandemic, lack of attention to migrant women's needs has worsened in Colombia, according to Women's Link Worldwide and Corporación Mujer Denuncia y Muévete. As national health care resources got reshuffled to deal with the virus, many locally-run migrant shelters and soup kitchens temporarily closed.
<div class="zn-body__paragraph" data-paragraph-id="paragraph_0A209