Video Ad Feedback
She retired for 9 years. How Olympics' delay could save her comeback
03:44 - Source: CNN

Chusovitina will be 46 when her 29-year Olympic journey is expected to end. Whether or not she takes home hardware this time, her story is still unprecedented and unforgettable. Chusovitina demonstrates it’s not just about winning, but about perseverance.

Staring at an intimidating 33-foot drop, adrenaline pumping, Wilkinson flipped gracefully into the water below. The challenges she has overcome throughout her diving career have made her strong – strong enough to dominate the sport for a decade.

She is the first woman to win diving’s three major world titles, including a gold medal at her first Olympic Games in 2000. Wilkinson told CNN she is hungry for more. After nine years in retirement, and recovery from a dangerous injury, the now 42-year-old is attempting a comeback in the face of a worldwide pandemic.

When Wilkinson resumed training to compete at the Games in Tokyo, which were originally scheduled for July 2020, she felt a nagging and unfamiliar weakness in one of her arms.

An MRI revealed major damage to the discs in her neck, caused in large part by a career of repeatedly hitting the water at high speeds. Her doctor warned that a car accident or bad fall could leave her a quadriplegic.

Now married with four children, Wilkinson was told she would need spinal surgery not just to dive, but to safely do everyday activities with her children. Wilkinson had the surgery and rushed to get back into the water ahead of the 2020 Olympic trials.

When the coronavirus pandemic brought the world to a screeching halt, the organizers announced in March they would postpone the Games for a year. The trials, which were originally scheduled for June, were also put on hold.

For athletes who train their entire athletic careers to peak at the right time, few might welcome the postponement of the 2020 Olympic Games – but Wilkinson calls it a gift of time to recover and train.

Her comeback hinges on her ability to overcome injury, something Wilkinson has done before. Adaptation, her career has demonstrated, is one of her greatest strengths.

Nicknamed the ‘angel of death’ in competition

Wilkinson began dreaming about the Olympics when she saw gymast Mary Lou Retton’s perfect-10 vaults at the 1984 Olympic Games.

When she was 15 she quit gymnastics and visited the diving well for the first time. Wilkinson embraced the unfamiliar territory, dreaming that this sport could one day lead her to the Olympics.

In 1999 she gave up her college scholarship at the University of Texas to train full-time for the Olympics. But three months before the 2000 Olympic trials, she broke multiple bones in her right foot in a routine diving drill.

Through a fog of anger, pain and heartbreak, Wilkinson said it was the prospect of an unfulfilled dream that pushed her to keep training and competing without looking back.

“I remember the weight of it hitting me and just realizing this has been my dream since I was a little girl. This might be my only shot. I have got to find a way – if it’s on one foot – to get to those trials and just try because I don’t want to look back in five years and ask ‘what if,’” Wilkinson said. 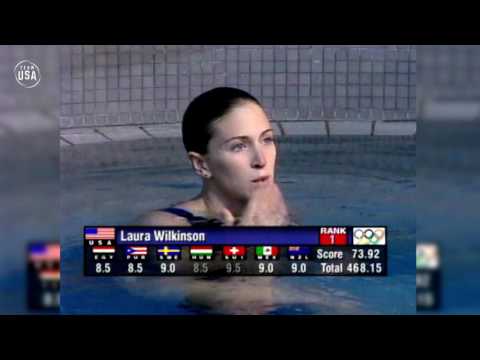 Wilkinson’s foot was not fully healed when she competed in Sydney, but she persevered, climbing the stairs to the diving platform at the Olympics wearing a protective shoe to avoid the pain of walking barefoot. She was the only American to reach the finals of the women’s 10-meter platform, starting off in eighth place.

When she lifted her arms before the dive that required the same motion as the drill that shattered her foot, Wilkinson said she forgot about the pain. “I looked fear right in the face and it disappeared. ‘All you have to give is everything you have,’” she wrote on Instagram.

That dive helped the 22-year-old clinch the gold medal in a shocking performance that NBC commentators called “one of the most improbable diving competitions in Olympic history.”

It had been 36 years since an American woman had won gold, and it disrupted China’s 12-year winning streak in the event.

“She’s one of the most tenacious competitors I have ever seen in my life,” Wilkinson’s lifelong coach, Kenny Armstrong, told CNN. He added, “Somebody nicknamed her the ‘angel of death,’ because she was genuinely nice and destroyed you and then told you how good you did.”

While her foot was in a cast, Wilkinson and Armstrong had to think outside the box for her training. Unable to get into the water until three weeks before the trials, they practiced visualization techniques and studied a copious amount of film to prepare.

“In some ways that is a bigger feat to me than being Olympic champion. … Getting on that team was such a huge feat after what we went through,” she said. “I think I might have made the Olympic team if I hadn’t have broken my foot, but I know I would not have been on top of the podium.”

Over the next decade Wilkinson competed in two additional Olympic Games and became the first woman in history to earn all three world titles for platform diving, winning the 2000 Olympics, 2004 World Cup, and 2005 World Championships.

An ‘unbeatable’ force in women’s diving

Wilkinson didn’t place in the next two Olympics, but she had changed the sport by upping the degree of difficulty, Armstrong said.

Wilkinson’s gold medal-winning dive in 2000 consisted of two and a half somersaults and a half twist. By 2008, Wilkinson added two additional twists to that dive, somehow managing to pack even more skill into the seconds she has between leaving the platform and hitting the water at speeds nearing 35 miles an hour.

“She took women’s diving 10-meter to a level that only guys were doing.”

Two dives on the list that Wilkinson executed required three and half rotations in a pike position, or a reverse tuck – something USA Diving Coach Matt Scoggin said no woman was doing shortly after the Sydney Olympics.

Wilkinson made the world work toward her goals, Scoggin told CNN. The bar she set while competing was, and is, the standard to beat, he said.

A mindset unfettered by adversity, on top of a willingness to always train harder, is why Scoggin puts Wilkinson in a category of her own. With those factors, when asked to describe Wilkinson in a word, Scoggin chose “unbeatable.”

After her third Olympics, at age 30, she decided to retire from diving to build her family. Wilkinson and her husband, Eriek Hulseman, have four children, two of whom are adopted from China and Ethiopia. She said returning to the pool was always in the back of her mind.

“There’s this ‘mom guilt’ and this thought that you have to put away all your dreams and all your ambitions because now it’s time for your kids, when in reality I’ve learned that your kids can make you better, they make you stronger and (you can) take them with you on the journey,” Wilkinson said.

In 2016, Armstrong casually invited Wilkinson back to the pool to work out. She said it felt like coming home.

While Wilkinson was retired she didn’t see the sport progress in difficulty, one of the reasons she asked Armstrong whether it would be crazy to make an Olympic comeback. He said no.

Within a year, she had remastered her entire list of 10-meter dives.

Wilkinson said her children are now her motivation to return to the winners’ podium. She hopes to be a positive example for them of setting and achieving your goals.

Coming out of retirement revealed a potentially catastrophic injury

She was diagnosed with degenerative disc disease and had disc protrusion in multiple cervical joints. This created a dangerous instability of the discs in her neck.

She said the prognosis was terrifying. Wilkinson’s neurosurgeon told her that without surgery, an accident could cause quadriplegia.

Wilkinson went ahead with the spinal fusion surgery, and less than four months later, she was back at the diving well practicing.

She stuck to her recovery plan and after only six months, her doctor declared her fully fused. But Wilkinson was starting to feel like she was running out of time, with just over a year to train before the 2020 Olympic trials.

Laura Wilkinson shares part of her recovery from spinal fusion surgery on Instagram.

Now that the Games have been pushed back a year, Wilkinson said she plans to use this extra time to her advantage, taking every opportunity to grow stronger, physically and mentally. She has set her sights on winning in Tokyo.

No American woman has placed at the Olympics in women’s 10-meter diving since she broke China’s winning streak in 2000. Although she has already made history, Wilkinson is eager to do it again.

“You don’t have to have the lead if you have the heart to come from behind,” Wilkinson recited as one of her favorite quotes, a mantra that has repeatedly served as inspiration when she faces setbacks.

“I may not be the fastest, strongest, or get in the water cleanest, but I have more heart than anyone here,” Wilkinson added.

Heart – a measure that cannot be quantified in sports, but exemplified in the way an athlete wins, loses and overcomes – is the foundation of Wilkinson’s story.